118 year old people who have been dead for 36 years are voting in Michigan. 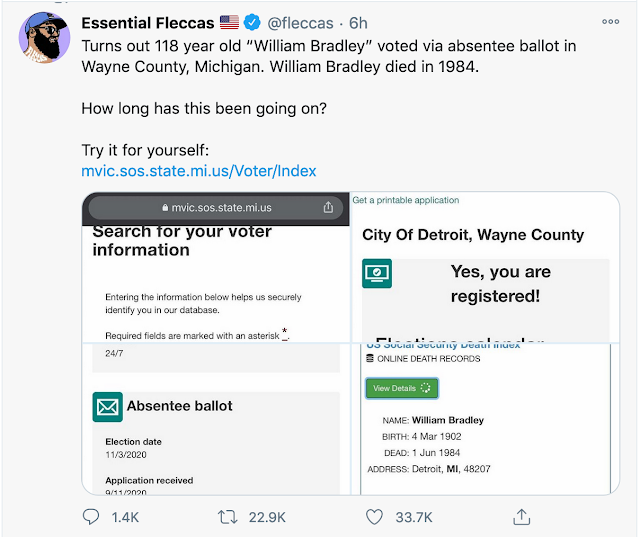 Other cases being reported of a 120 year old voting, and a 93 year old nursing home resident with dementia who didn’t request a ballot.

US Postal Worker in Michigan claims they were told to fraudulently post mark ballots received after the election as received on November 2, so they could be included in the count.
GOP election observers are being refused access to counting locations to prevent them being able to properly observe the count in Democrat controlled Pa and Mi.
Electronic voting machine counts can also be tampered with by switching up to 3% of the votes from one candidate to the other, which is enough to change the outcomes in many swing states. A 1.5% loss would become a 1.5% win.

(If they switch too many votes, lots of people are likely to cry foul.)

Typical rampant US election / voter fraud that happens every election but will have been ramped up in key swing states like Pa, Mi & Wi this year.
Mail in ballots facilitate this kind of fraud.
Wisconsin is being reported as 89% turn out.
Highly unlikely to be genuine.
Highly likely to be the result of lots of ballot stuffing with fraudulent mail in “votes”.
The US has one of the LEAST secure voting systems in the entire world.
598 views