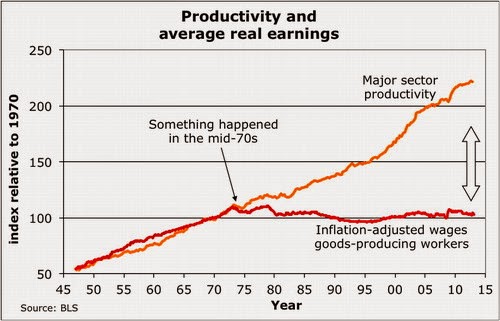 More than 40 percent of American households cannot afford rent, transportation, childcare, or a cellphone, according to a new study from the United Way Asset Limited, Income Constrained, Employed Project, obtained by Axios. U.S. households are still struggling despite living during the second longest “recovery” in our nation’s history.

United Way ALICE Project Director Stephanie Hoopes, Ph.D., told Axios, “based on 2016 data, there were 34.7 million households in that group — double the 16.1 million that are in actual poverty.” Combining for almost 51 million American households essentially living in poverty in the land of the American Dream.

Millions of Americans have been left behind during this age of globalization and forced into poverty. Trump won the presidency because these deplorables need something different. And now it turns out these Americans Hillary Clinton dismissed and took for granted are much larger than we thought, despite the claims that the U.S. economy is on solid ground and the stock market trades at near record highs.

These households with adults who are working but not earning enough, unable to afford a middle class lifestyle but not technically living in poverty include the 66% of Americans making less than $20 an hour, or $40,000 per year if working full time.

To make matters worse for these financially strapped Americans, rent, gas, and food are rising far too fast. Monetary policy today encourages inflation while ignoring the detrimental effects it has on the cost of life’s essentials (housing, food, energy). With wages barely budging, the Fed is aiming for prices to go up at least 2% each year, ideally 2.5% per year. Inflation was 2.46% in April 2018 and ended 2017 at 2.13%. Wage growth has picked up some pace, lifting the annual increase in average annual increase to 2.7% in March of this year. Still, this matters little if almost 30% of the labor force is not working or looking for work at all. The civilian labor force participation rate has remained below 63% since the start of 2014.

Image via St. Louis Federal Reserve / Consumer Price Index for All Urban Consumers: All Items from end of 2008 to Q1 2018

Piling on these depressing economic realities, the U.S. government is spending money it doesn’t have like a drunken sailor on shore leave.

Goldman Sachs first warned us a few months ago that the U.S. fiscal trajectory was dire. “US fiscal policy is on an unusual course” with the budget deficit expected to keep rising over Trump’s next few years in office following his deficit-exploding policy to slash taxes and boost spending which will result in a federal debt/GDP ratio of around 85% of GDP by 2021.

The rising interest that needs to be paid on the Federal Debt is the biggest risk of all. This will send the U.S. government into “uncharted territory,” according to Goldman.

Back in February, Goldman stated: “… we project that, if Congress continues to extend existing policies, including the recently enacted tax and spending legislation, federal debt will slightly exceed 100% of GDP and interest expense will rise to around 3.5% of GDP, putting the US in a worse fiscal position than the experience of the 1940s or 1990s.”

Today, Goldman has doubled down on its dark assessment of America’s fiscal situation, writing that “the US fiscal outlook is not good,” also predicting that the U.S. fiscal deficit will double from $1 trillion over the next 12 months to $2 trillion by 2028, jumping to a near record 7% of GDP.

This current economic expansion that began in 2009 will come crashing down by 2020 as the Fed raises interest rates, according to forecasters surveyed by The Wall Street Journal. 59% of private-sector economists surveyed said the expansion would likely end in 2020, while 22% said 2021. Even less declared the recession would arrive next year or in 2022 or later.

“The current economic expansion is getting long in the tooth by historical standards, and more late-cycle signs are emerging,” Scott Anderson said. He is the chief economist at Bank of the West and predicted a 2020 recession.

62% selected an overheating economy leading to Fed tightening and then to a recession. Other options at least 5% of economists picked were a financial crisis, the bursting of an asset bubble, a fiscal crisis or disruptions to international trade.

“The American Dream is Dead,” reads Georges Abi-Heila’s article on Medium.com that was reposted on ZeroHedge. He lays out the economic situation quite well, focusing on the numbers that paint a very disheartening picture of how impossible it is to move up in America’s unequal society today.

The most important driver of one’s standard of living is sadly determined at birth. Who your parents are will determine your stature in life. Poor people remain poor and rich people stay rich. 15% of America’s children still live in poverty today. America’s economy is unfair and it is only getting worse. Sure, life is unfair, but it didn’t always used to be this way.

Economic inequality is spiking at astronomical rates. Most of the country’s economic growth over the last few decades has gone to the top 0.1%. Inequality is approaching a level we have not seen since right before the 1929-1939 Great Depression.

The top 10% of American households own 80% of the wealth. In addition, a third of the population has no wealth at all and the top 0.1% owns as many assets as the bottom 90%. Abi-Heila rephrases the statistics this way: “if the US was a village of 1000 people, there’s 1 guy that has more money than 900 other villagers combined.” The U.S. is by far the most unequal society in the developed world and it is getting worse year after year.

Chances are slim that you can improve your financial situation given the current climate.

According to the National Bureau of Economic Research, U.S. social mobility fell 70+% over the last 50 years. Making more money than your parents did is far from a sure thing. In fact, in 2016, approximately half of 30-year-olds earned less than their parents at the same age.

The rich get rich while the rest struggle to get by. Since 1979, essentially all of the income gains have gone to the top 1% while wages have stagnated for everyone else. Something seemed to change in the 1970s. As wages generally tacked with rising productivity, the average worker’s pay started to not grow as the economy did. Our economy is broken and American workers are getting screwed.

From 1980 to 2014, American households making at or below the median income saw their incomes rise by 1% or less. At the very lowest rung of society, pre-tax incomes have actually fallen while government assistance spikes to keep up with Americans making less money. Meanwhile, the rich saw dramatic income growth from the 1980s to today. Incomes for highly educated, suburban home-owning, affluent Americans making in the low six-figures are not driving this rise of income growth as their incomes grew at about 1.5% per year. The real spike in income has gone to the pockets of the top 1% (those earning an average of $1.3 million+ a year), where average annual income grew from 3-6%.

This stark inequality cannot continue. The American Dream cannot die. Or we will die. Our elites continue to make out like bandits while the rest struggle to pay the bills, meet rising rents, and put food on the table. A redistributive economy and an exploding welfare state are far from adequate answers to this troubling economic dilemma. 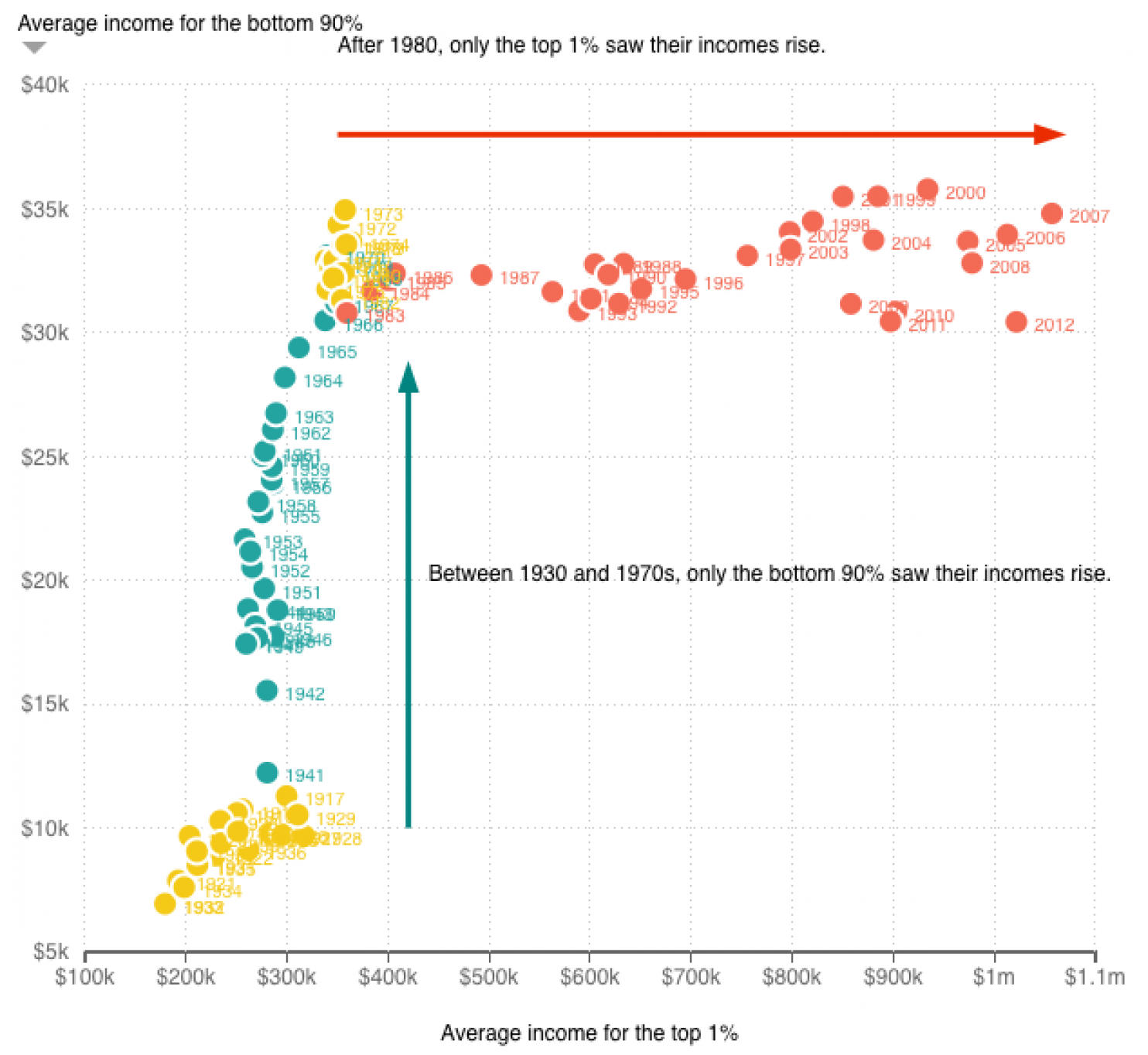 A majority of Americans are desperate and hopeless as the champions of globalization continue to point to the decline in poverty in America. However, the homeless population rose in this country for the first time since 2010 and 24% have chosen to live in California.

People are finally waking up to the death of the American Dream as Millennials have sadly come to accept that most will likely not earn as much or more than their parents did.

“If a tiny minority has all the wealth, if income is stagnating for 9 citizens out of 10, if chances of climbing are minuscule, isn’t rebellion justified?” Abi-Heila asks.

The rebellion started with the election of Donald Trump. Though he has made some positive moves in the realm of deregulation and the tax cuts putting more money into the pockets of hard-working Americans, his decision to increase spending will explode the deficit to unsustainable rates and his slow-walking in the fight against illegal immigration is making it difficult for many poor Americans to land jobs to support their families.

Something has to change if we are to survive as a nation. A rebellion is needed but a socialist utopia growing the government, giving more benefits and handouts to the poor, and the implementation of a national $15 minimum wage will accomplish nothing. We are borrowing our children’s future with inordinate amounts of debt and it will all come crashing down before we know it. A reordering of the economy and an emphasis on wage growth for Middle America must be enacted. Inequality has to be lessened or the people will revolt.