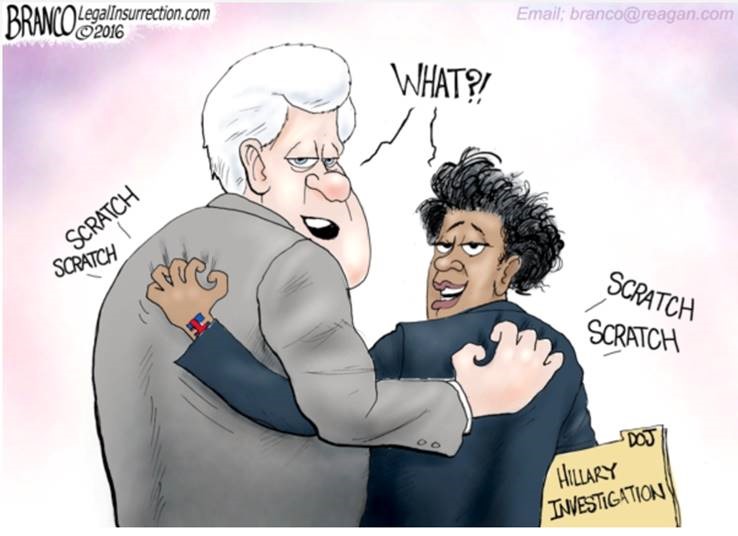 Most people don’t believe in coincidences.  Nor should they in this case.  The following hypothetical discussion provides a viable explanation that could account for the “surprise” encounter between Loretta Lynch and Bill Clinton on a Phoenix tarmac on June 27, 2016.  The fact that the two met while the investigation of Bill’s wife was still pending was sufficient in and of itself to accomplish what they set out to do.  And it really doesn’t matter what they said to each other when they met.

It is quite possible that the infamous tarmac meeting was arranged between Attorney General Loretta Lynch and Bill Clinton beforehand.  And that it was set-up so that Lynch could use the “chance” meeting as a pretext to step aside (if not formally recuse herself) from the Clinton “matter” and pass the baton to FBI Director James Comey to complete the foreordained whitewash so that Hillary Clinton could run for president unfettered by an ongoing FBI investigation.

A couple of months before the tarmac meeting, Comey sent Andrew McCabe, James Baker and James Rybicki at the FBI a draft of an exoneration statement letting Hillary Clinton off the hook.  The fix was in.  Now it was time to set things in motion to end the charade and shut down the investigation.  The only unfinished business was to finalize the probe as expeditiously and as plausibly as possible.  This meant that the players in the final act had to execute their roles with dispatch and with a certain degree of finesse.

It makes sense that Lynch didn’t want to be the one to announce the exoneration because she wasn’t as familiar with the details of the yearlong probe as Comey was and, therefore, believed she was less capable of handling pain-in-ass questions from reporters and congress in the aftermath of the planned exoneration.  To complicate matters, in 1999, President Bill Clinton had appointed her to lead the office for the Eastern District of New York as United States Attorney, a post she held until 2001.  It would be very suspicious, to say the least, for Lynch to exonerate the wife of her benefactor.  If Hillary Clinton were elected president, as was expected at the time, Lynch would, in all likelihood, be invited to remain in her position as U.S. Attorney General in the Clinton administration.  These ties to the Clintons represented a conflict and made her vulnerable to quid-pro-quo accusations.  Furthermore, she reported directly to the president making the nexus between a Clinton exoneration and Obama uncomfortably close.

Therefore, it was better to have Comey exonerate Clinton because he was further removed from the president and he had already committed to clearing her of any wrongdoing.  In addition, Comey and his pals at the FBI and the U.S. Department of Justice, who hated Trump with a passion, were anxious to see it through because they would be the beneficiaries of a grateful Clinton, who seemed to be a shoo-in to become the next president.  It would also give sanctimonious James Comey an opportunity to capture the spotlight, which he relishes.  From Lynch’s standpoint, an embarrassing meeting with Bill Clinton was preferable than being the point person making a high-stakes announcement in the middle of a presidential contest on whether Hillary Clinton violated the Espionage Act and obstructed justice.  A significant advantage of a direct exoneration of Clinton by Comey, where he acted as judge and jury, would be to short-circuit a lengthy review process by DOJ prosecutors of the FBI’s evidence, thus enabling the Clinton case to be closed right away.  The need to shut down the FBI’s probe of Clinton as soon as possible was the paramount consideration at the time because the presidential election was only four months away.

The Clintons had evaded the arm of the law for decades.  So, what difference would it make if Clinton escaped justice one more time?  In other words, the decision to exonerate Clinton would meet general expectations.  Time would quickly put the email scandal in the public’s rearview mirror along with all the other Clinton scandals.  The anticipated Clinton victory at the polls would ensure that the entire affair would be quickly relegated to an historical footnote.

The prearranged meeting on the tarmac successfully achieved its intended objective.  Bill Clinton and Loretta Lynch had the motives and the means to pull it off.  It was so easy a caveman could do it.  All Bill Clinton had to do was glad-hand his way into the presence of Lynch, who was waiting for him.  There was no way the meeting of a former U.S. President and a U.S. Attorney General would go unnoticed at a public airport.  And it didn’t, which is exactly what the two of them wanted to happen.  Their preplanned encounter began the final chapter of the FBI’s bogus investigation of Clinton’s emails.  A few days after the June 27th tarmac meeting, Hillary Clinton attended a laughable softball interview with the FBI on July 1st, and then she was cleared by Comey during a televised press conference held on July 5th.  One, two, three and it was all over.

So, it took one week to cap off the grand finale of an expensive FBI investigation into the Clinton emails that had a preordained outcome from the outset.  The players in this disturbing miscarriage of justice thought they were very clever and could easily use their immense power, as our nation’s top law enforcement officers, to manipulate our system of justice to meet their political aims.  But none of them ever thought they would be flushed out over the ensuing years and that they themselves would become the subject of government investigations for obstruction of justice, tampering with a national election, perjury, and other crimes.

If there is any justice, all the perpetrators of this elaborate fraud at the FBI and the DOJ will be brought to justice and made to stand trial.  Now that the Mueller report has been completed and President Trump has been cleared of all charges, the focus has shifted to the deep-state Praetorians who thought, and still think, they are above the law.