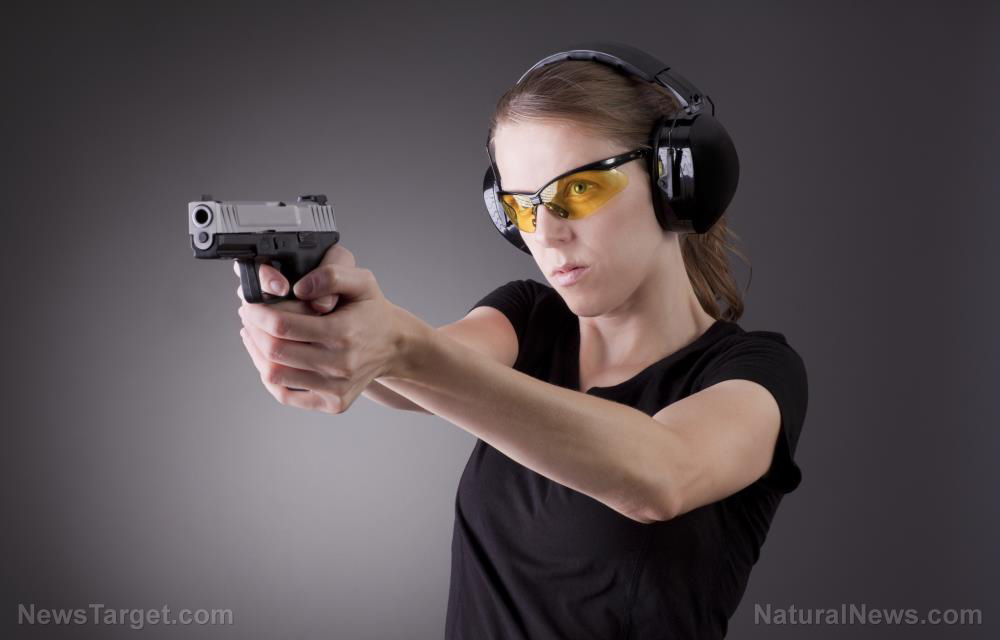 (Natural News) Gun control activists took to the streets for the “March on the NRA” recently. The August 4th protest took place in Fairfax, VA, just outside of the NRA’s headquarters. Their rallying cries included calls to dismantle the Second Amendment and ban “fully semiautomatic weapons,” and chants of “Shame! Shame! Shame!”

Some were simply supporters of stricter gun laws, but others believe that American citizens should have their right to bear arms stripped away entirely. One protester, identified as “Amy,” told the National Rifle Association’s camera crew that she supported a full repeal of the Second Amendment, and stated she did “not think civilians need guns at all.”

Another gun-grabber declared that people shouldn’t have the right to defend themselves and their families against home intruders.

“A gun ban is absolutely what’s necessary. I think that we need to start from scratch with the whole gun issue,” the woman laughed.

She added, “We have people who think it’s okay to kill an intruder into their house.”

SAVE THE BEST FOR LAST: This one #gun-grabbing #protestor thinks THAT YOU SHOULD NOT BE ABLE TO #DEFEND YOUR LIFE if an #intruder breaks into your house. The #NRA and our 6 million members know better than this and we will never stop fighting for the #2A! #EmptyHQ #FreeIceCream pic.twitter.com/SYWWztnl6Z

She went on to state that a home intruder would not receive the death penalty from a judge — a totally bogus straw man argument. If an intruder breaks into your home with the intent of harming your family, and you prevent that — then the only crime is the intrusion. But if you don’t act, the crime committed by the intruder could be far more serious.

It would be great if we lived in ideal world, where people didn’t need guns to protect them from would-be criminals or an over-zealous, tyrannical government. But that’s not the world we live in — and that’s why we have the Second Amendment.

Other protesters said they supported a ban on “fully semiautomatic weapons,” or flat-out banning guns in entirety. Yet, the organizations which orchestrated the march continue to assert that “No one is trying to take your guns away.”

“I believe in the ban of all guns,” another protester tells the camera crew. “I don’t think its necessary for civilians to carry around firearms and things that can kill people in an instant of second.” Kitchens and tool sheds must be frightening for these people.

Yesterday was #Saturday, which means our HQ employees were at home enjoying the sun with their family and friends. Meanwhile, #misinformed #gun-grabbing #protestors were chatting with our social media team. As promised, here is part 1 of 3. Stay tuned! Happy watching! pic.twitter.com/teB8eDvXB9

Writing for Bearing Arms, Tom Knighton notes that in many cases, gun control advocates are misinformed on how gun ownership works in the United States.

Knighton contends, “I can’t help but be amazed at the number of people protesting who don’t even understand the subject they’re supposedly so passionate about. I mean, if you think the gun laws are insufficient, how can I take your claim seriously when you don’t even know what the gun laws are?”

And it’s not just gun laws that many so-called gun control activists don’t understand: They don’t even know what kinds of weapons they’re against. These people say they’d like to see the AR-15 and the infamous “fully semiautomatic weapon” banned, but can’t even explain what these things are.  See below:

What do you think about "fully semi-auto" #firearms? These misinformed #protestors seem to think they exist and that ALL #GUNS SHOULD BE #BANNED. #Protest 101: before you make signs and hit the streets, know the basics of what you’re #protesting! Stay tuned for more! #2A #NRA pic.twitter.com/S5mV8WOJoe

See more coverage of stories like this at Guns.news.