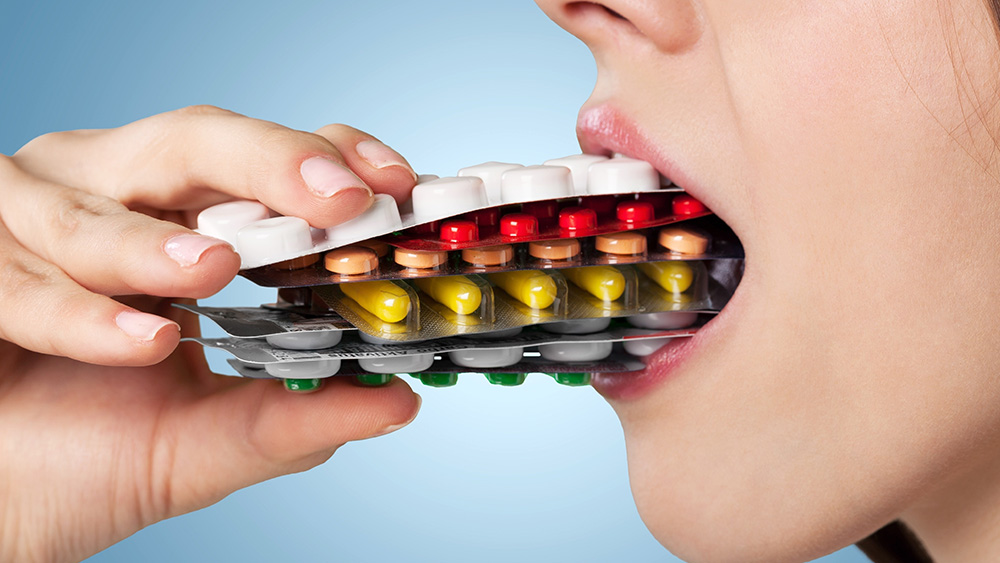 (Natural News) The reason there are no prescription medications available today where the side effects aren’t worse than the ailment being treated is because Big Pharma will not treat or heal anything without creating several new issues that keep their “customers for life” coming back for more. Most Americans do not want to stop eating junk food, fast food, corporate franchise restaurant food, microwaveable food, prepared food bar “stuff,” and “diet” food that’s mostly chock full of synthetic sweeteners, GMOs and MSG.

Due almost entirely to these nasty eating habits, about 200 million Americans seek medical doctors to prescribe them chemical-filled pills to kill the pain, quell the hypertension, reduce the inflammation, unclog the clots, numb the anxiety, and nullify the depression.

Most Americans think the FDA was created to protect us from dangerous chemicals that might wind up in food and medicine, but just the opposite is true. Over the past century, the FDA has tried to destroy all forms of holistic care in America that compete with “slash-and-burn” drug and vaccine treatments that are readily dished out by the allopathic Ponzi sick-care scheme that masquerades as ‘health’ care in this country.

The CDC is a actually a for-profit corporation listed on Dun and Bradstreet. As a health protection agency, the CDC is supposed to save lives and conduct critical science for responding to threats when they arise, but pharma corporations have lobbyists and their vice presidents now in positions of control in the bureaucracy, writing legislation that favors new, untested drug approvals, as they have for decades.

Both the FDA and the CDC promote toxic chemicals as medicine, including prescription medications, chemotherapy, and vaccines. Meanwhile, any food, herb, tincture, plant, seed, or essential oil that treats, prevents or cures disease is banned as “medicine” while being manipulated in labs, weakened or deadened, patented, and then declared a failure.

Prescription drug deaths skyrocket while the Big Pharma world pretends to search for cures for cancer, dementia, and diabetes

More Americans use and abuse “controlled” prescription drugs than heroin, cocaine and methamphetamines combined. How many of them will die this year? About 50 people will die today from overdosing on opioids. And now heroin is the death drug of choice for most people who become addicted to opioid pain relievers. Most teenagers think it’s safer to take a friend’s prescription drugs than to dose some illegal street drugs, just because they were prescribed by a doctor, but that’s not true at all.

The side effects of most prescription drugs that treat depression and anxiety include worsened depression and thoughts of suicide. How ridiculous is that? Every prescription drug advertised on television for all American children and teens to see comes slathered with side effects you wouldn’t wish on your worst enemies. Then they all feature the same tag line, “Ask your doctor if (fill in complex chemical name here) is right for you.”

It would only make sense that natural cures would be banned if they caused side effects like all the prescription medications do, but they don’t. If organic foods caused the health problems conventional foods do, they too would be banned, recalled or stuck with warning labels.

It’s as if we are all living in total idiocy like the movie “Idiocracy.” More than 200 million Americans think it’s okay if their medical doctor prescribes them “medicine” that can cause internal bleeding, loss of vision, coma, feelings of suicide, and thoughts of committing homicide. Wake up America. You’re living inside a real-life nightmare, where the food is toxic, the medicine is more toxic, and the medical doctors have no nutrition education, yet go to school for eight years to learn how to juggle chemical medicines like some Bozo science clowns. Maybe all M.D.s should wear big red wigs with big red noses and big red shoes while scribbling out those toxic prescriptions.