Here’s all the substantial links regarding Election Fraud by Brenda Snipes and Broward County officials.

Overt violations of ballot box chain of custody in Broward County

Trucks being used to block entrance to election offices, to prevent public and press of witnessing what is is going on. Clear violation of Florida law.

NBC and FOX sued Broward County because they were barred from viewing vote counting.

Same trucks used to transport ballots against chain of custody recorded removing documents in the middle of the night, in violation of a court order they had to fulfill by 7pm that day. Which the refused to comply with.

BREAKING: I took this video as the riot police removed me from where trucks were secretly loading stuff in/out of Broward Supervisors office. All this while they are violating constitutional rights & a court order! #BrowardCounty pic.twitter.com/DbxyKRde4f

Same caravan of cars used to deliver ballots to the rental truck, were all rental cars. One of them was an Avis rental. Ballot box found in back of rental car. Guy was close friend of Andrew Gillium

EXCLUSIVE PHOTO: An SOE box with the word “PROVISIONAL” was found by an @Avis employee in the back of a rental car at #FortLauderdaleAirport tonight. Last person to drive the car was a Broward County employee with @Broward.org email address. @browardsheriff responded to scene. pic.twitter.com/cAGE1e37xt

Broward county sheriff showed up to the Avis rental, at Ft. Lauderdale airport and shut down the entire airport because of a suspicious package. It was a ballot box.

New Video: Why did the Broward Elections Department BLOCK OUR VIEW of ballots being bundled inside the Davie, Florida voting site? What were they hiding? Another video we need investigated by all levels of law enforcement. Fire Brenda Snipes now. pic.twitter.com/Cpk1akUlcv 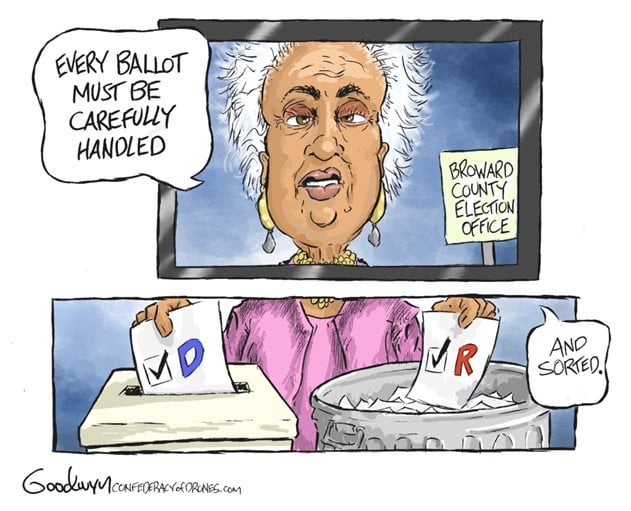