TALLAHASSEE, Fla. (CBS12) — As Florida starts to reopen, the architect and manager of Florida’s COVID-19 dashboard, announced she’d been removed from her position, Florida Today reported.

Rebekah Jones said in an email to CBS12 News that her removal was “not voluntary” and that she was removed from her position because she was ordered to censor some data, but refused to “manually change data to drum up support for the plan to reopen.”

Jones made the announcement May 5 in a farewell email to researchers and other members of the public who had signed up to receive updates on the data portal, according to Florida Today. She said that for “reasons beyond my division’s control,” her office is no longer managing the dashboard, involved in its publication, fixing errors or answering any questions.

Florida’s COVID-19 dashboard, created by a team of Florida Department of Health data scientists and public health officers led by Jones, was praised by White House officials for its accessibility, the Florida Daily reported. But over the last few weeks, it “crashed and went offline, data disappeared with no explanation and access to the underlying data sheets became difficult.”

Jones told CBS12 News that since she’s been removed, the dashboard still hasn’t been fully repaired.

These allegations are disturbing. Manipulating the data on Florida’s COVID-19 dashboard could cost lives.

“Jones also told CBS12 in Tallahassee on Monday that she refused to ‘manually change data to drum up support for the plan to reopen’ the state.”t.co/XJ24rukaPZ

(FL) COVID numbers for May 17th were double before the firing of the data scientist. The number has since been changed. Date Taken: May 18th 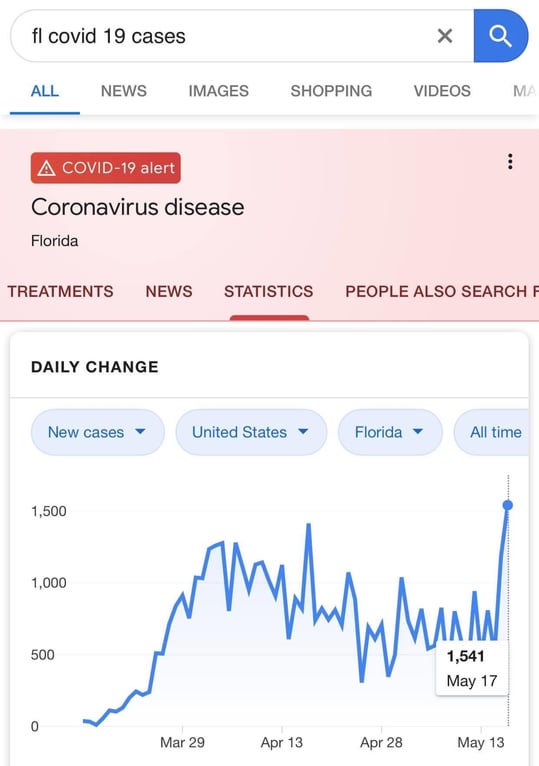