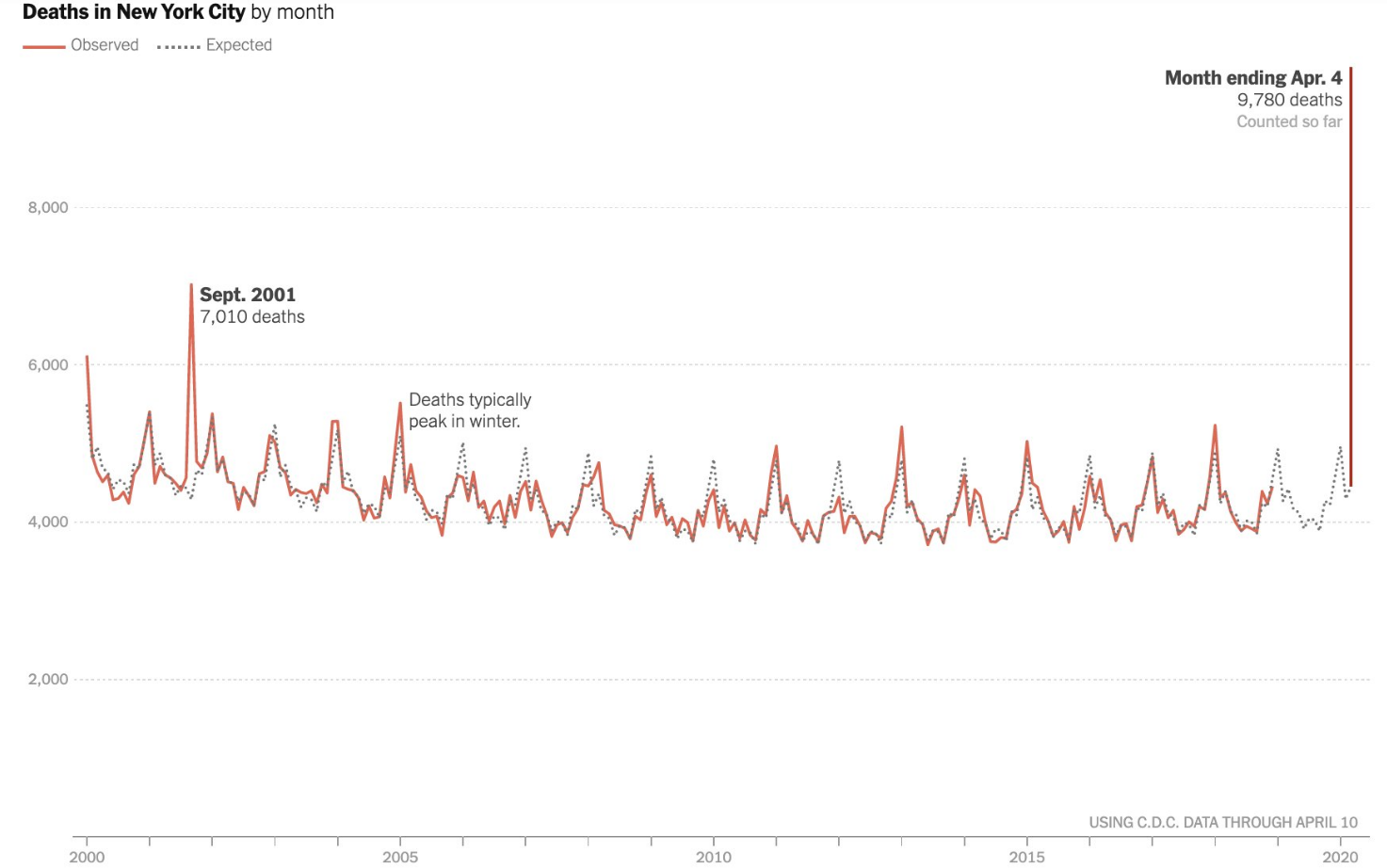 The full article is available for free in link above, however.one must subscribe to a free account to view it. Below is a portion of the full article.

Notes: Counted deaths for the month ending April 4 include an additional 1,396 coronavirus deaths reported by the city that have not yet been added to the C.D.C. data.Source: New York Times analysis of provisional data from the National Center for Health Statistics, Centers for Disease Control and Prevention; NYC Department of Health and Mental Hygiene.

The overall rise in deaths suggests that the combination of crowded hospitals, an overtaxed ambulance system and a fearful population could have resulted in more deaths among people with heart attacks, strokes or other ailments who might have survived in normal circumstances.

The measurements in our chart rely on a New York Times analysis of provisional data from the National Center for Health Statistics, along with historical data from the C.D.C. and the city’s Department of Health. They capture the number of people who died within the city limits in each month since January 2000.The historical numbers include some small adjustments because of differences in how the two public health organizations measure deaths in the city.

The recent numbers are most likely an undercount. Even in normal times, death certificates take time to be processed and collected, and complete death tallies can take weeks to become final. This is especially true for cases involving coronavirus. “Covid deaths all have to be manually coded,” said Bob Anderson, chief of the mortality statistics branch at the C.D.C.’s National Center for Health Statistics, adding that death counts from New York City typically lag actual deaths by 10 or 11 days.

But even if the current count is perfect, roughly 9,780 people have died of all causes over the past month in New York City, about 5,000 more than is typical.

The numbers for the last two weeks of the period are even more stark: nearly 7,000 dead, more than three times as many deaths as would normally be expected this time of year.

As our charts show, deaths are strongly seasonal: On average, more people die in winter and fewer in summer. These fluctuations aren’t just related to the flu. In a typical year, the vast majority of the variation in mortality is driven by seasonal variation in the number of heart disease deaths.

But the deaths over the last month dwarf what would be expected from seasonal variations, and look more like a mass casualty event. The city’s medical examiner’s office is holding bodies in refrigerated trailers outside of hospitals. City emergency medical technicians are declaring deaths in homes and on the streets instead of bringing people to hospitals.