Israeli psychopaths murdered 64 unarmed protestors and wounded 2,700 others, over 1,200 of whom were shot with live ammunition, in a pre planned massacre (latest casualty count).
www.aljazeera.com/news/2018/04/gaza-protest-latest-updates-180406092506561.html

The purpose of the massacre from the Israeli side was to deter further protests and to prove to the world they could get away with committing any atrocity. (The last part of this may not be true we shall have to wait and see – see below.)

The protests on May 14th were the culmination of six weeks of protests for the “Great March of Right of Return”, which demanded the right of refugees to return to their homes as guaranteed by UN human rights law.
Their homes are now in Israel and the Israelis are breaking international law by not allowing the Palestinian refugees to return home.
70% of the Palestinians in Gaza are refugees (or the ancestors of refugees) from the 1948 Nakba (or Catastrophe) where 700,000 Palestinians were ethnically cleansed from Israel by Israeli militias who murdered thousands of Palestinians in various atrocities if they refused to leave their homes.

Over 50 unarmed peaceful Palestinian protestors had already been murdered by the Israelis in the weeks prior to May 14th.

The 70th anniversary of the Nakba was on May 15th. The protests were moved up one day to coincide with the move of the US Embassy to Jerusalem.

Despite over 50 unarmed Palestinians being murdered by Israeli snipers in the preceding weeks, tens of thousands of Palestinians took part in the protests on May 14th (estimates range from 35,000 to 50,000).

The massacre on May 14th was not a “clash” as the Israeli government and pro Zionist Corporate media are trying to make out. A “clash” suggests some sort of equality of forces but the Israelis had high powered sniper rifles with orders to shoot to kill, while the protestors had been ordered to peacefully protest.
There were a couple of hot heads throwing rocks with sling shots at Israeli snipers 100 yards or more away. The Israeli snipers were safely hidden behind large earthworks a short way back from the fences, while the Protestors were completely exposed on open ground.

The Israelis fired at the Protestors indiscriminately but deliberately targeted innocents using high powered rifles with sniper scopes. The people who were shot, were shot quite deliberately.

They shot people peacefully waving flags hundreds of yards way from the border:-

Israeli soldiers shot and injured an elderly Palestinian man during pro-Gaza demonstrations in Al-Bireh city, and when paramedics approached to give him first aid, the soldiers shot them too! (Video)
twitter.com/Ian56789/status/996705461117300738 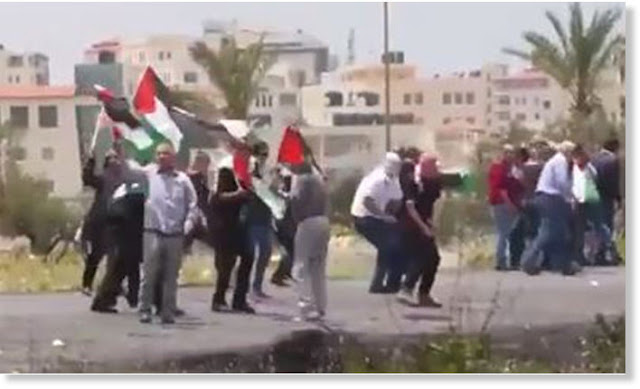 The Israeli snipers shot several Paramedics and doctors treating the wounded, killing one.
This is an undoubted War Crime and against the Geneva Convention and all rules of Warfare.

Canadian doctor: Israeli soldiers shot me in both legs as I was treating injured protesters during Gaza Massacre
mondoweiss.net/2018/05/canadian-soldiers-protesters/ 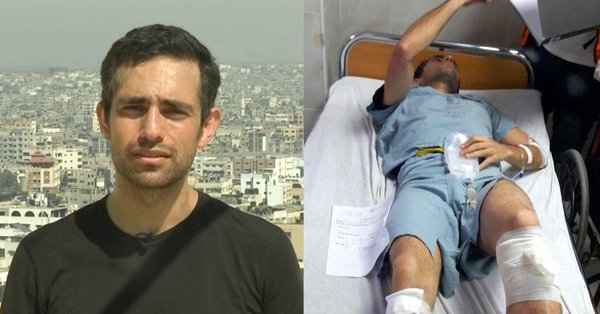 The Israelis shot several members of the Press clearly wearing Press Flak jackets, 2 of whom were murdered:- 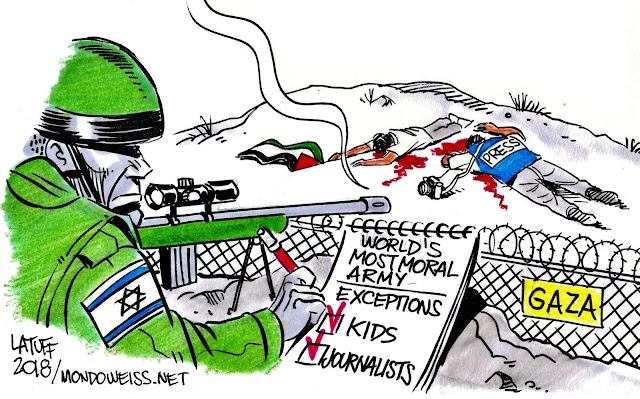 Israel shoots an internationally-acclaimed, award-winning photographer because she was capturing Israeli brutality
www.middleeastmonitor.com/20180517-award-winning-photographer-shot-by-israel-soldier-in-the-west-bank/ 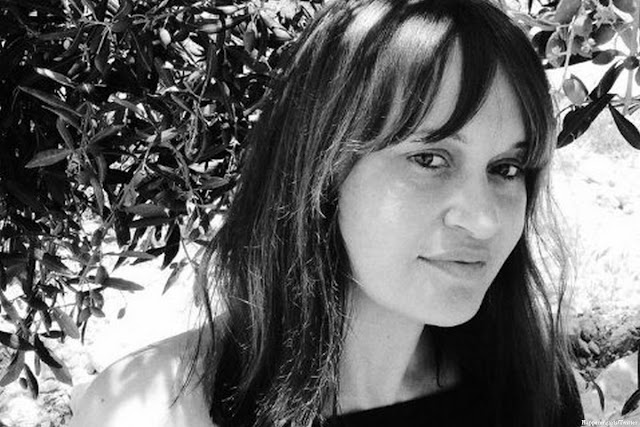 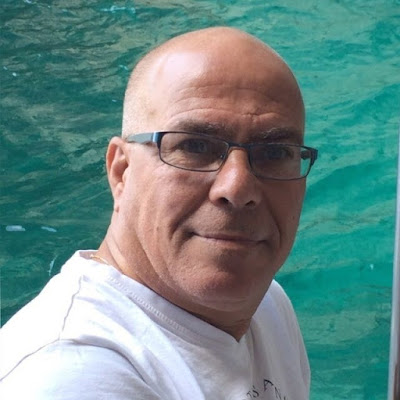 The Israelis used large quantities of tear gas dropped from drones, during the protests. 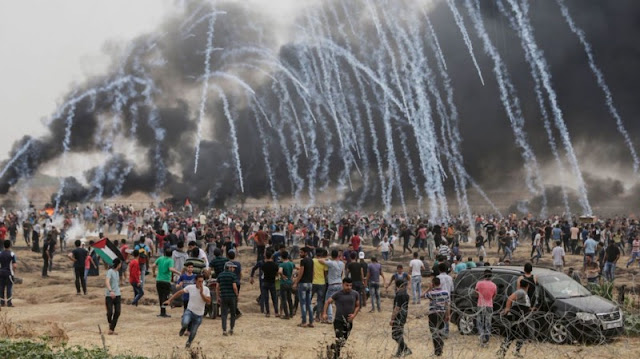 The Tear Gas was also targeted at tents set up well away from the front lines and well away from the border where women cooked and provided food for the protesters and which also offered some shelter to treat the wounded.
In one of these makeshift tents an 8 month old baby girl, Laila Alghandour, was murdered by Israeli tear gas. 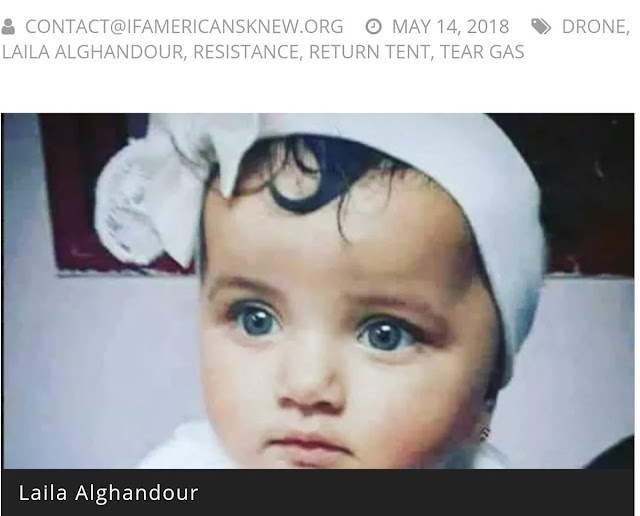 The Israelis are claiming that 52 of the people killed were Hamas terrorists.
But this is not backed up by the evidence of the videos of the people being deliberately murdered and shot by the psychopathic Israeli snipers.

This number comes from a claim by a Hamas spokesman, but the number is inflated for political purposes to exaggerate the influence of Hamas on the protests.
Pictures were posted on Hamas’ web site of people killed during the massacre. But there is no credible evidence to say how many of these people were actually Hamas members.

The protests were pre planned, but not by Hamas.
They were organized by ordinary people in Gaza.
Hamas members were asked to attend (by Hamas) but to lay down their arms and to protest peacefully.

The Israelis are blaming Hamas for their mass murders, but this is nonsensical.
Hamas didn’t provoke the Israeli snipers into murdering peaceful protestors well away from the fence, or medics treating the wounded, or the Press recording events, or the shooting of 60 year old men peacefully waving flags.

If the Israelis had wanted to prevent a massacre they could have prepared beforehand with non-lethal means to quell and deter any protesters that tried to breach the fence, such as significant numbers of water cannon.
If any protesters did manage to breach the fence (which they did not) they could have been arrested or tasered or stopped by any other such non-lethal means as Police in other countries use to quell a violent protest.
The Police in Europe do not quell riots by starting off with indiscriminately shooting and murdering the rioters with live ammunition. If they did the policemen and politicians who allowed it would be immediately fired.
Only the Israelis get a pass for cold blooded murder.

READ  All Of A Sudden, There Is A Tremendous Amount Of Political Chatter About Creating A Palestinian State In The Middle East

The Gaza protests were peaceful and in no way a riot. Go ask a riot control policeman in Germany or the Netherlands or the UK how they would have prepared for and handled the Gaza situation.
It would NOT have been how the Israelis did it.

The Israelis WANTED to murder people.
And they wanted to murder LOTS of unarmed people to send a message to the whole world that they are untouchable and can get away with any atrocity, no matter how brazen.

We will see if this turns out to be true.
The UN are now sending a War Crimes investigation team to Gaza.
Of course the Israelis are already refusing to cooperate with the investigation and will try to deny the UN team entry to Gaza – the Israelis know they are guilty of massive War Crimes.

The UN has also proposed that a UN Peacekeeping force be sent to Gaza to prevent the Israelis committing more War Crimes in the area.
The US will veto this resolution, but then it will be sent to the full UN General Assembly where it will be approved by an overwhelming number of countries (in the last such vote on Israel in December the US/Israel lost by 128 votes to 9).
This will cause enormous embarrassment to the US and Israeli governments.
It will also cause further splits between US/Israel and Europe which are already on shaky ground with Trump cancelling the Iran Deal and Russian sanctions back on the table for possible cancellation at the instigation of Italy.
It will also provide added impetus to the BDS movement to boycott Israeli goods in Europe and the US.

Ivanka Trump said it was a “great day for Israel in moving the US Embassy to Jerusalem” on May 14th while the world’s media simultaneously broadcast the mass murders in Gaza.
I’m pretty sure Ivanka’s statement is not true.
The US and Israel are even more isolated in the world than they were before. 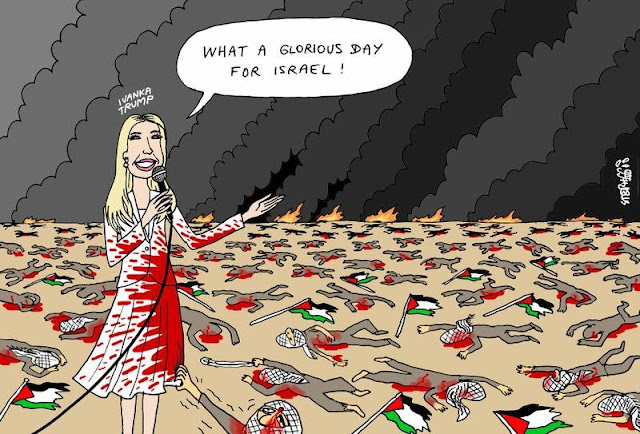 The purpose of moving the US Embassy to Jerusalem is to ensure there can never be a Peace Settlement with the Palestinians and there will be Perpetual War in the Middle East
ian56.blogspot.com/2018/05/why-moving-us-embassy-to-jerusalem-is.html 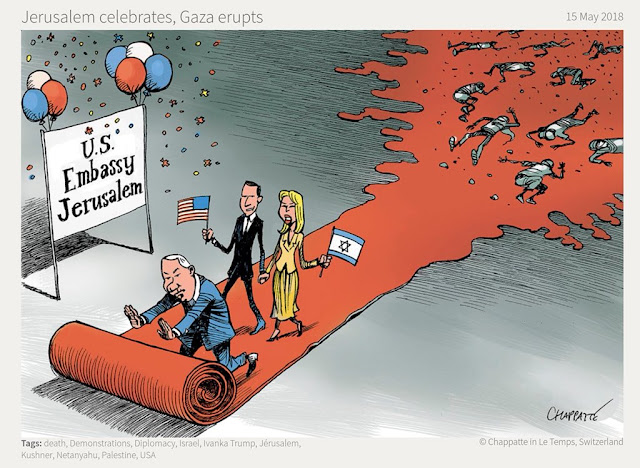 Excellent informative 8 minute video with GMU Assistant Professor Noura Erakat @4Noura being interviewed on CBS about the Gaza Massacre and the Israeli-Palestine conflict in general. 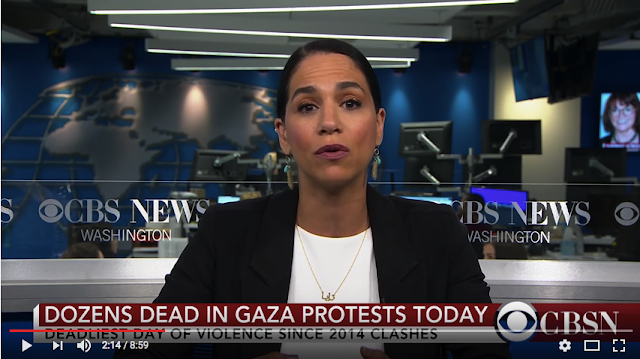 Israel was only allowed to join the UN on three conditions.
They have broken all three. 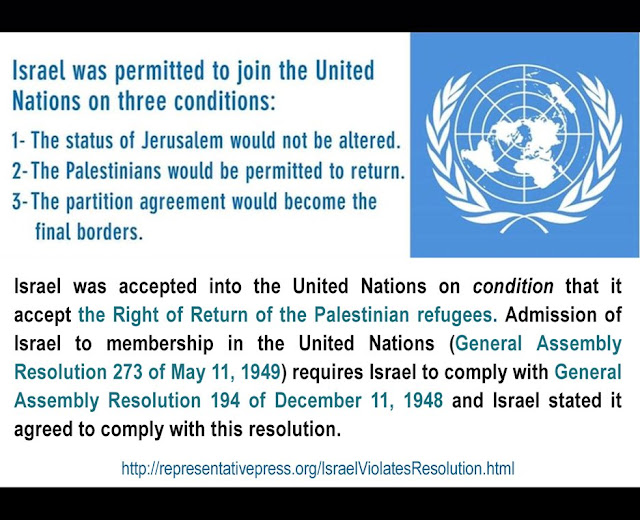