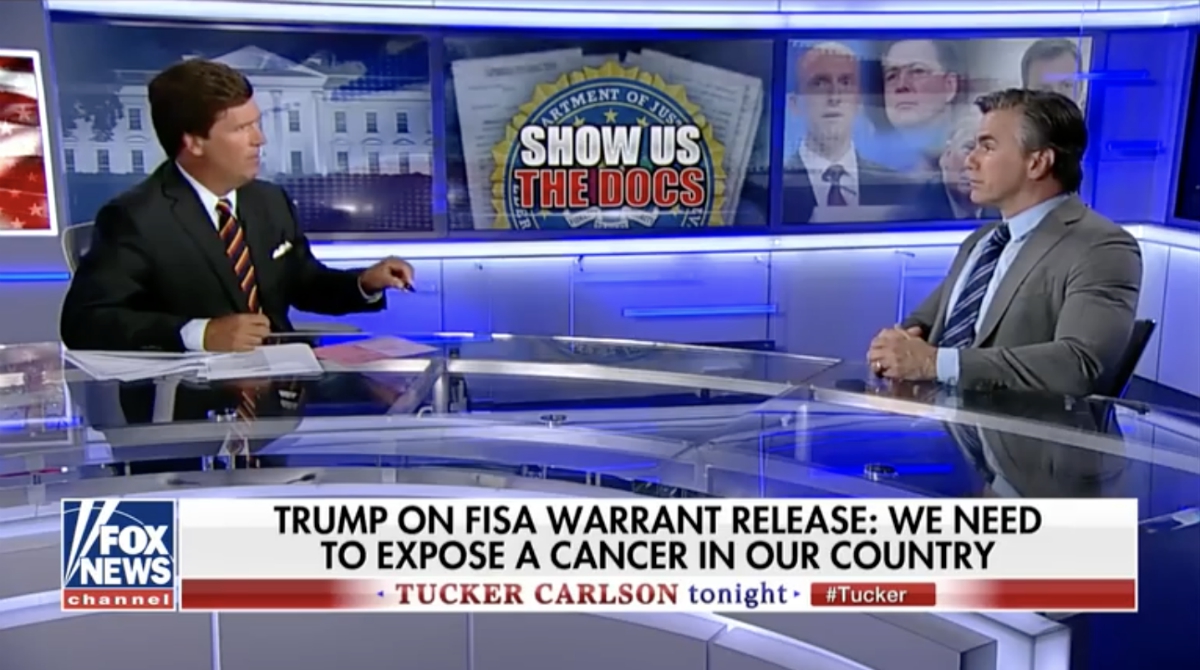 (Natural News) A cabal of Democrats are conspiring with the Deep State to halt the release of unredacted FISA court applications regarding onetime Trump campaign adviser Carter Page, in direct defiance of an order issued to the FBI and Justice Department by the president.

Earlier this week POTUS Donald Trump said he had given both agencies instructions to declassify and release the documents in an effort to be transparent and to allow the American public to see exactly why former President Obama and officials within his administration believed it was in the vital national interest to spy on an American citizen, and one that just happened to be associated with a rival presidential campaign.

But according to investigative reporter Sara A. Carter, sources say there are elements within the DoJ and FBI that will try to defy the president and instead issue heavily redacted documents.

We say ‘panicking’ because the entire operation to spy on the 2016 Trump campaign was not only hatched by a Democratic president but carried out by Deep State operatives who have shown disdain for POTUS Trump and who appeared to be working to both thwart his victory and then undermine him after he took office.

Constitutional law experts like D.C.-area attorney Will Chamberlain have said that anyone who defies a lawful order by the president, who is exercising legal authority under Article II of the Constitution as head of the Executive Branch, is seditious.

When are we going to see some arrests?

“You are equal branches of government, but they’re not subordinate to you,” Chamberlain said of the letter signers, The National Sentinel reported. “I’m sorry — President Trump has not issued a request to the intelligence agencies that they declassify this information, he has issued an order.”

“President Trump has issued an order to his subordinates to declassify certain information related to the Russia investigation,” he continued. “He has plenary declassification authority as the president of the United States. The FBI and DOJ are subordinate to him. Congress does not get to order Executive Branch officials to defy a president — that is actually a constitutional crisis.”

Fox News legal analyst and attorney Gregg Jarrett, writing on the news network’s website Wednesday, agreed. And he went a step further: He said any Executive Branch official who disobeys the president’s order should be fired for “rank insubordination.”

And he issued a warning similar to Carter’s:

In the alternative, [Deep State officials] may endeavor to delay or “slow roll” the release of documents hoping that the political winds may shift or that control of Congress itself will change hands in the upcoming election.

The Democrats are panicking because Hillary Clinton – who also played a role in “Spygate” by paying for the bogus “Russia dossier” – was supposed to beat Trump. All of this nefarious behavior, that is very likely illegal in some respects, was never supposed to get out. The American people were never supposed to learn about it.

Now it’s all on the cusp of being revealed thanks to a duly-elected president who has been targeted since before he took office.

It’s about time. Now, if only his attorney general, Jeff Sessions, would step up, we might actually begin to see some much-needed prosecutions.

Read more about the corruption of the Deep State at Corruption.news.