You’re all going down. You know who you are. Mark my word….

Was his tweet in reference to the payments that have been traced from the Obama regime to FBI informant Stefan Halper?

Less than a week after Stefan Halper was outed as the FBI informant who infiltrated the Trump campaign, public records reveal that the 73-year-old Oxford University professor and former U.S. government official was paid handsomely by the Obama administration starting in 2012 for various research projects.
www.zerohedge.com/news/2018-05-21/fbi-informant-stefan-halper-paid-over-1-million-obama-admin-spied-trump-aide-after

A longtime CIA and FBI asset who once reportedly ran a spy-operation on the Jimmy Carter administration, Halper was enlisted by the FBI to spy on several Trump campaign aides during the 2016 U.S. election. Meanwhile, a search of public records reveals that between 2012 and 2018, Halper received a total of $1,058,161 from the Department of Defense.
www.usaspending.gov/#/search/68d183f62648f90913efbf55858f3893

Halper’s contracts were funded through four annual awards paid directly out of the Pentagon’s Office of Net Assessment (ONA). Established as the DoD’s “internal think tank” in 1973 by Richard Nixon (whose administration Halper worked for twitter.com/The_War_Economy/status/978272721858678784), the ONA was run by foreign policy strategist Andrew Marshall from its inception until his 2015 retirement at the age of 93, after which he was succeeded by current director James H. Baker.
www.defense.gov/About/Biographies/Biography-View/Article/1363986/james-h-baker/

The most recent award to Halper for $411,575 www.usaspending.gov/#/award/23674475 was made in two payments, and had a start date of September 26, 2016 – three days after a September 23 Yahoo News article www.yahoo.com/news/u-s-intel-officials-probe-ties-between-trump-adviser-and-kremlin-175046002.html by Michael Isikoff about Trump aide Carter Page, which used information fed to Isikoff by “pissgate” dossier creator Christopher Steele. The FBI would use the Yahoo! article along with the unverified “pissgate” dossier as supporting evidence in an FISA warrant application for Page.

Halper approached Page during an election-themed conference at Cambridge on July 11, 2016, six weeks after the September 26 DoD award start date. The two would stay in contact for the next 14 months, frequently meeting and exchanging emails.
dailycaller.com/2018/03/25/george-papadopoulos-london-emails/

He said that he first encountered the informant during a conference in mid-July of 2016 and that they stayed in touch. The two later met several times in the Washington area. Mr. Page said their interactions were benign.
www.nytimes.com/2018/05/18/us/politics/trump-fbi-informant-russia-investigation.html

Halper used a decades-old association with Paul Manafort to break the ice with Page.

Page noted that in their first conversation at Cambridge, Halper said he was longtime friends with then-campaign chairman Paul Manafort. A person close to Manafort told TheDCNF that Manafort has not seen Halper since the Gerald Ford administration. Manafort and Page are accused in the Steele dossier of having worked together on the campaign’s collusion conspiracy, but both men say they have never met.
dailycaller.com/2018/05/20/stefan-halper-carter-page/

Spying on Page after the election…

The second installment of Halper’s 2016 DoD contract is dated July 26, 2017 in the amount of $129,280 – around three months before the FISA warrant on Carter Page was set to expire following repeated renewals signed by Deputy AG Rod Rosenstein and a federal judge.

On July 28, he emailed Page with what the Trump campaign aide describes as a “cordial” communication, which did not seem suspicious to him at the time.

In the email to Page, Halper asks what his plans are post-election, possibly probing for more information. “It seems attention has shifted a bit from the ‘collusion’ investigation to the ‘ contretempts’ [sic] within the White House and, how–or if–Mr. Scaramucci will be accommodated there,” Halper wrote. 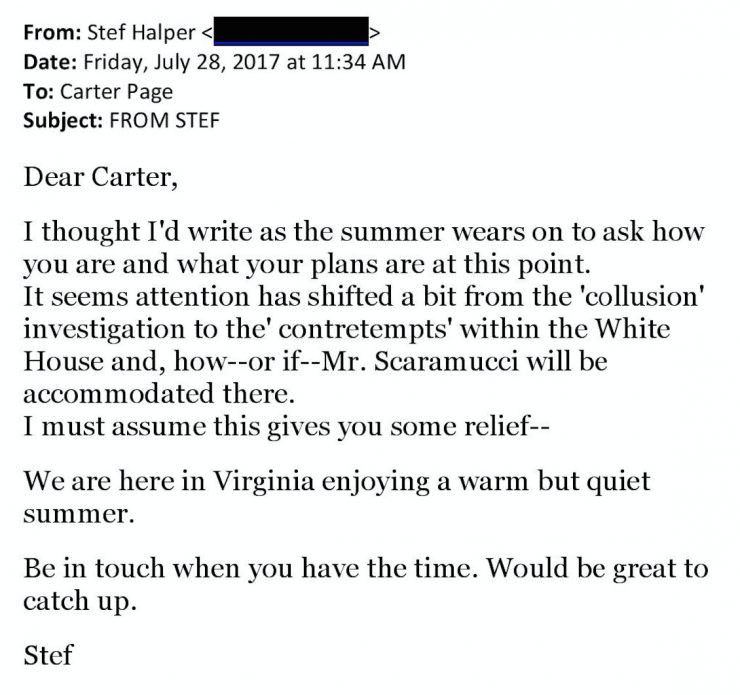 con·tre·temps
1. An unforeseen event that disrupts the normal course of things; an inopportune occurrence.
2. An argument or dispute: “another France-versus-England contretemps” (Rob Hughes).

See also  Federal Reserve Alert! Vice Chair for Supervision Michael S. Barr in speech: "We are currently evaluating whether the supervisory stress test that is used to set capital requirements for large banks reflects an appropriately wide range of risks."

www.bbc.com/news/world-us-canada-40735613
Perhaps sensing an opportunity to find out if Page was still “on the inside,” Halper may have reached out to find out what he knew.

Finally, Jacob Wohl makes a very good point with this question: How much time has the MSM spent talking about the massive cash payments sent to Stefan Halper to spy on our President? ZERO.

How much time has the MSM spent talking about the massive cash payments sent to Stefan Halper to spy on our President? ZERO.

How much time has the MSM spent talking about the massive cash payments sent to Stefan Halper to spy on our President? ZERO.

Stefan Halper was the same person who invited George Papadopolous to London, where he just so happened to sit down next to that infamous Australian “Diplomat” (who also worked with the Clinton Foundation)

Stefan Halper was the same person who invited George Papadopolous to London, where he just so happened to sit down next to that infamous Australian "Diplomat" (who also worked with the Clinton Foundation)