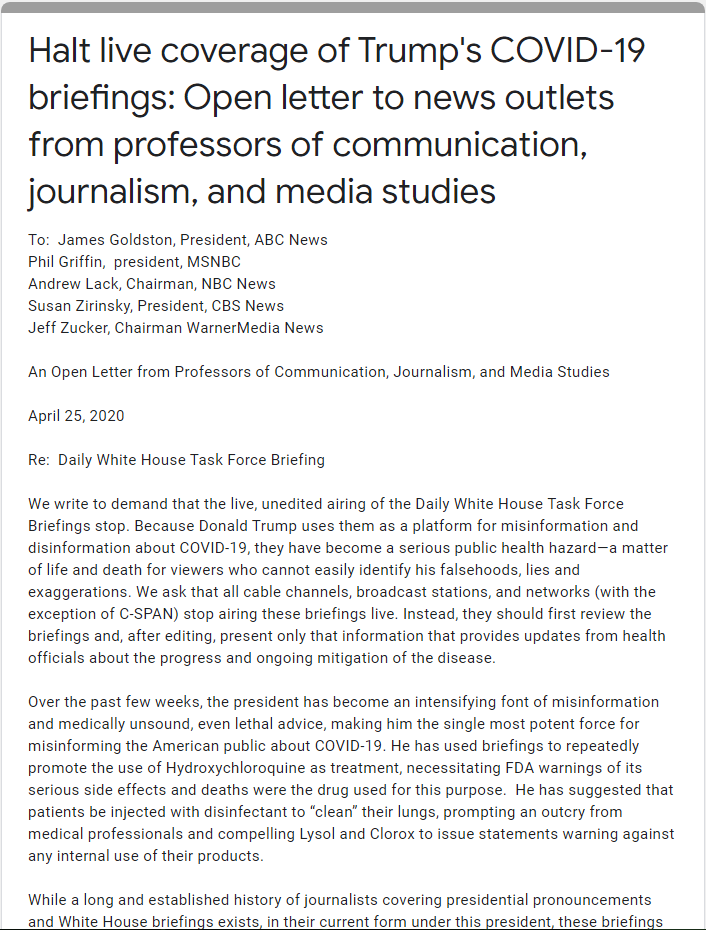 If the public decides that basically all our institutions are garbage and wants to burn them down, based on the last few years I’m going to find it hard to argue to the contrary.

DAVID HARSANYI: A Rant against the Media.

Why is the first inclination of Donald Trump’s supporters to lash out at the press when he says something ridiculous? Part of it is political expediency, of course. Most of it, though, is completely understandable.

Even when Trump badly mangles science, journalists, who spend vast amounts of their time chasing gotchas, offer a misleading and histrionic rendering of his comments. Trump doesn’t want Americans to inject themselves with disinfectants or ingest bleach and die. Journalists know this.

The media are a collection of well-funded outlets that set the agenda, narrative, tone, and focus of coverage while conspiring with a major political party. Reporters don’t openly collude with Democrats (well, most of the time they don’t), they merely share the same objectives and set of values. This wasn’t a problem created by Trump’s emergence. It’s problem that’s been festering for decades.

And it was on full display during Trump’s latest press confeerence: ‘Media is broken’: Journo Olivia Nuzzi asks Trump ‘possibly the most ridiculous question asked so far’ at today’s WH COVID19 presser (video). UPDATE (FROM GLENN): Nuzzi’s fellow media flacks are congratulating her on her bravery. But of course, real bravery would be asking Joe Biden about Tara Reade. No journalist has been brave enough to do that, and despite Nuzzi’s previous #MeToo posturing, I very much doubt she’ll break that pattern.