Just last year, the American economy was performing strong: the Dow Jones hit record highs and the U.S. unemployment hit a record 2.1%. In usual times, it would have been highly unlikely to have seen the country’s largest-ever stimulus package just a year later. But, the coronavirus has brought entirely unique circumstances to the world economy, and the U.S., along with other countries, has responded with massive economic programs. 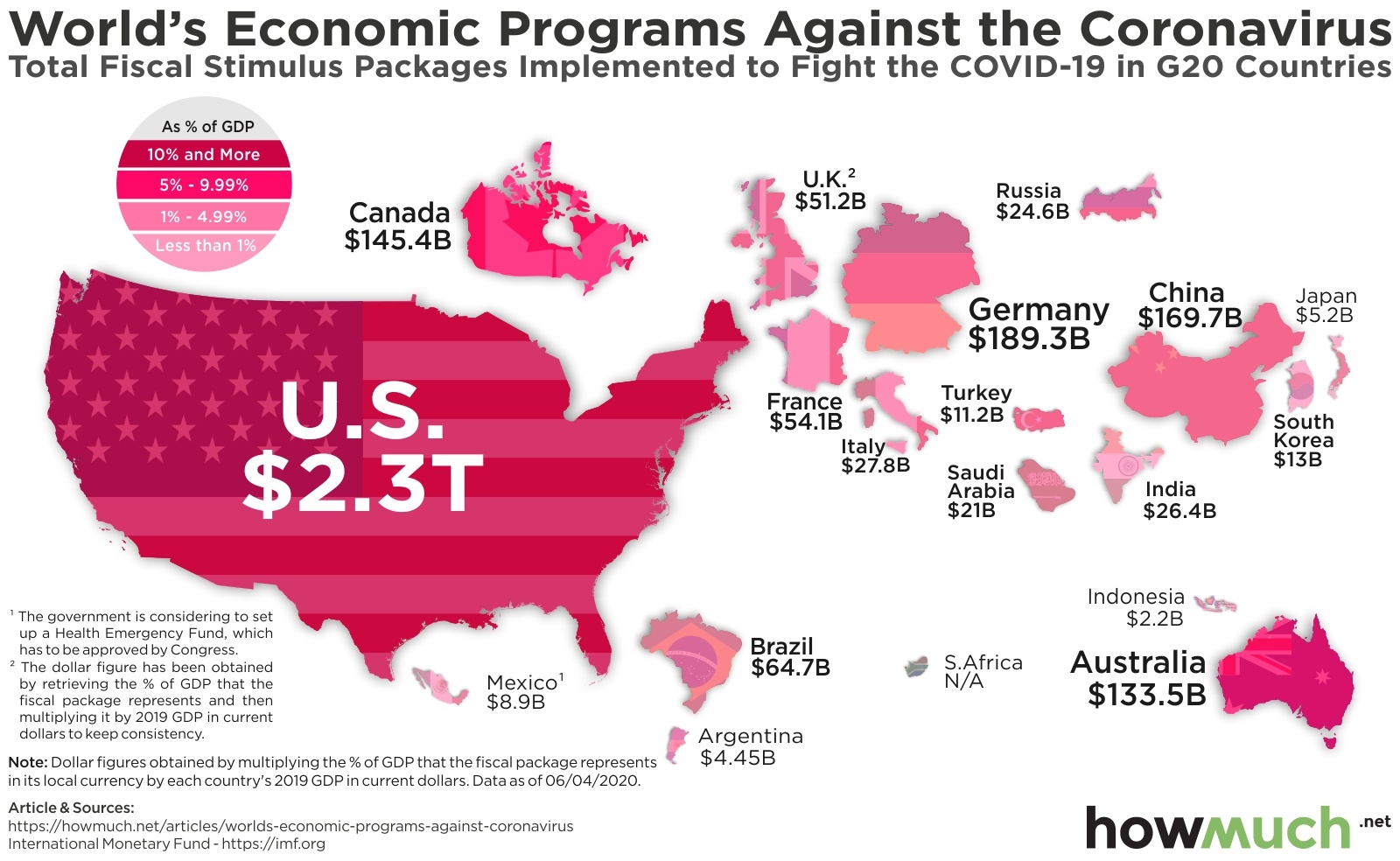 Our coronavirus stimulus data comes from the International Monetary Fund (IMF). We also have compared the stimulus for each country to that country’s gross domestic product (GDP) using additional data from the IMF and from the United Kingdom’s Office for National Statistics. We have plotted the data in a map for each country with a fiscal stimulus program, drawn to scale for its total stimulus amount. A darker shade of red on the country indicates the stimulus plan represents a larger percentage of GDP. Note that our analysis focuses on G20 countries only.

The Five G20 Countries with the Largest Coronavirus Stimulus Programs

In the United States, a relief package was delivered that President Trump claimed as “twice as large” as any prior program. The $2 trillion package includes a one-time cash payment of $1,200 to qualifying Americans. While proponents of a universal basic income program claim the program shows the idea is becoming mainstream, there are significant logistical challenges: those without IRS direct deposit may not receive their check for months.

The U.S. is not the only major economy implementing a direct cash payment: Canada has guaranteed $2,000 every four weeks for up to 16 weeks for all workers affected by the pandemic. The program is part of Canada’s C$52 billion ($36.62 billion) program, which was doubled from an initial C$27 billion program.

In Australia, the government will provide wage subsidies of A$1,500 every two weeks per employee. Although summer in Australia, the country reported nearly 6,000 cases by early April, questioning the assumption that warmer weather will kill the virus.

Europe, and particularly Germany, have also passed aggressive economic stimulus programs: the European Central Bank (ECB) will spend over 1 trillion euros on Eurozone bonds over the next nine months. While the ECB has considered a special European coronavirus bond, northern European countries like Germany and the Netherlands fear that this will encourage southern countries like Italy and Spain to spend recklessly.

Was the stimulus plan in your country appropriate? Do you support direct cash payments? Please let us know in the comments and share with your friends.