U.S. stocks recovered Monday’s losses and kicked off December with more gains. The rallies we saw in November continued on to start the final month of 2020 – a year which has been quite trying and difficult.

In the mid-term and long-term, however, there is certainly a light at the end of the tunnel. Once this pandemic is finally brought under control and vaccines are mass deployed, volatility will surely stabilize, and optimism and relief will permeate the markets. In fact, CNBC personality Jim Cramer said that beating COVID-19 would be like “the end of prohibition.” Stocks especially dependent on a rapid recovery and reopening, such as small-caps, should thrive.

It is a simple fact – markets will continue to wrestle with the negative reality on the ground and optimism for an economic rebound in 2021. While more positive vaccine news continues to trickle in day by day, there is still discouraging COVID-19 news, economic news, and geopolitical news to consider. Amidst the current fears of a double-dip recession with further COVID-19-related shutdowns and no stimulus, it is very possible that a short-term downside persists. However, Tuesday’s stimulus update offered some kind of hope. Due to this tug of war between good news and bad, any subsequent move downwards will likely be modest in comparison to the gains since the bottoms in March and since the start of November. It is truly hard to say with conviction that another crash or bear market will come. If anything, the constant wrestling match between sentiments will keep markets relatively sideways.

While there is long-term optimism, there is short-term pessimism. A short-term correction is very possible. But it is hard to say with conviction that a big correction will happen. 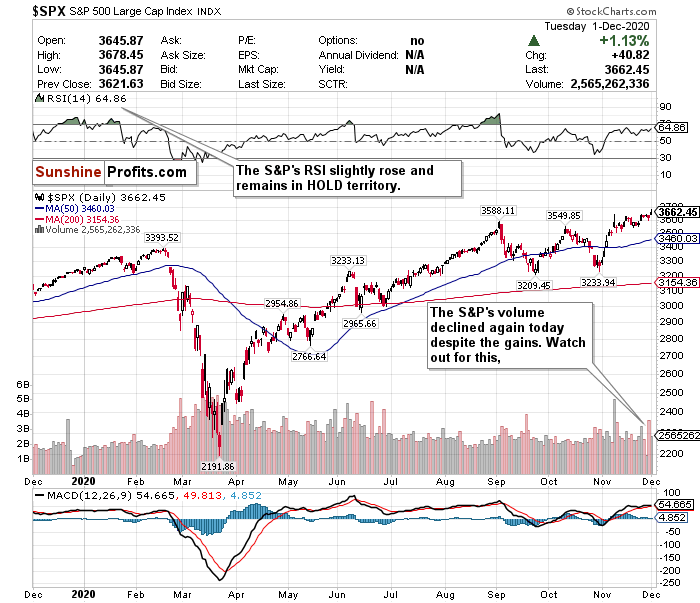 In Tuesday’s S&P chart, there are a few indicators that show that the S&P could face some near-term volatility. However, again, it is hard to say with conviction that it will be something major – especially compared to its gains since March. The RSI of 64.86 keeps the S&P in a HOLD category, and it has ticked up somewhat since Tuesday. Be very wary if the RSI exceeds the overbought level of 70 – because it’s approaching.

The S&P’s sharp decline in volume since November 9 is what is more alarming. Especially the fact that it declined on Tuesday – despite the index’s move to a record closing high.

Low volume, especially a sharp drop in volume, means that there are fewer shares trading. Lower volume also means less liquidity across the index, and an increase in stock price volatility. Therefore, any drop in volume coinciding with a sharp rally puts some serious doubt on the sustainability of the up-trend and short-term outlook.

We’re in the early recovery phase of the cycle following the COVID-19 recession, but this rapid rebound is under pressure. Further pullback from these elevated levels would not be a shock… but another surge based on good news would not be a shock either. Because of all of the uncertainty, a HOLD for the S&P is an appropriate call. For an ETF that attempts to directly correlate with the performance of the S&P, the SPDR S&P ETF (SPY) is a good option.

Today’s premium analysis will showcase a “Drivers and Divers” section which will break down some sectors that are in and out of favor.