We are living in strange times ladies and gents, and America is basically under martial law following the January 6th rally, when disenfranchised Trump supporters gathered to protest the election steal.

The thing is, Washington DC is currently occupied by the military, and feds are now arresting people who rallied on the DAY BEFORE the so-called insurrection.

Joe Biden didn’t bother to explain the plebs this weird situation, nor any of his people by that matter. However, J.B. Pritzker, the Governor of Illinois announced the goyim that “they” are fighting, let me quote, “white supremacists” and “disinformation.”

This actually makes a lot of sense.

The FBI recently raided the homes of two men who sponsored an invective-laced rally near the US Capitol a day before the deadly insurrection, the first known search warrants involving people who organized and spoke at rallies preceding the attack. CNN learned of the raids through an eyewitness account, public records, a lawyer representing one of the rally organizers and an FBI spokeswoman who confirmed details of the searches.

Neither man has been charged with any crimes.

A key question about the fledgling investigation has been how aggressively prosecutors will scrutinize the people who organized and spoke at rallies that preceded the stunning assault.

Taylor and Hostetter are well-documented promoters of conspiracy theories ranging from QAnon and the “deep state” to those related to the Covid-19 pandemic and the 2020 presidential election. 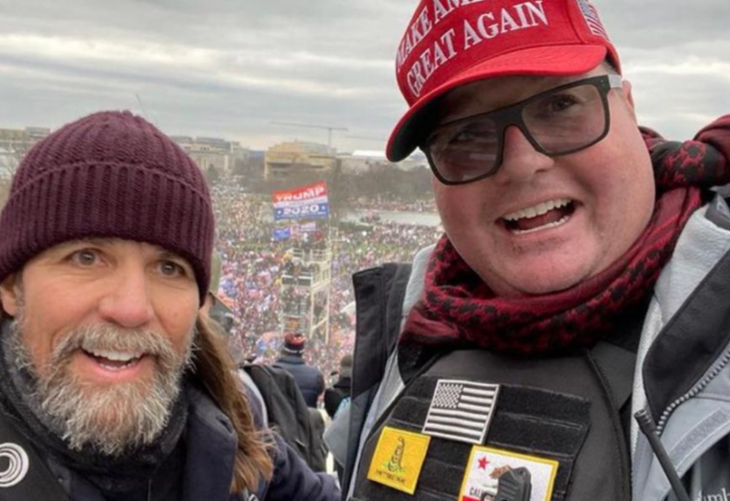 Nobody is asking Biden or his minions why Washington DC is under military occupation. The official line is that the military was summoned to stop MAGApedes to party too hard during Biden’s inauguration, but that was more than 2 weeks ago, yet tens of thousands of National Guardsmen from multiple states are still there.

Why? No one in the Feral Gummint seems to know , except from the governor of  Illinois, who claims the troops are fighting disinfo and white supremacists. That means you, if you’re white and a Trump supporter.

“The U.S. Department of Defense has asked Illinois to assist federal and local agencies in this continued effort, and Major General Neely and I are ready to ensure that the state of Illinois continues its proud legacy of protecting our democracy,” Pritzker said in a statement.

“Ultimately, we must root out the dark forces of racism, white supremacy and disinformation that have created this moment, but until we do that, our extraordinary troops will deploy with honor.”

On Wednesday, the Department of Homeland Security issued a terrorism advisory system bulletin due to a “heightened threat environment across the United States” that the department believes “will persist in the weeks following the successful Presidential Inauguration.”

“Information suggests that some ideologically-motivated violent extremists with objections to the exercise of governmental authority and the presidential transition, as well as other perceived grievances fueled by false narratives, could continue to mobilize to incite or commit violence,” the bulletin reads in part.

I have no idea what that means to be honest. Moving more than 20,000 troops to Washington DC and occupying the Capitol is a bold move, but remember, we are dealing with the same people who told us during the BLM riots that we have to abolish police, because of “muh institutionalized racism” and “abuse of power”.

There’s no precedent for what’s going on in America, and truth be told, no one has any idea as to where and how this will end.

If you ask me, this has to do with “normalizing” a heavy military presence on the streets, because this is going to be the “new normal” in Biden’s America. But this may sound too conspiratorial for some of my readers.

However, that would make perfect sense, considering the general plan of the elites of pushing further the Covid-19 hysteria in order to install a high-tech surveillance state (which is already deployed under the pretence that only private companies are spying on you), then to push in global warming nonsense as a justification for things going down the drain economically, and continued poverty.

Currently, they are working hard to substitute the reasoning for why you have to go into poverty from the coronavirus (lockdowns) to the old-theme of global warming. You can see that many of Joe Biden’s EOs are somehow related to “climate.”

That is the bigger picture.

Check out this video: