In September of this year, our law firm announced a public corruption investigation of the events surrounding the election held in August of 2018 in Broward County. Since that time, we have received information about the activities of the Broward County Supervisor of Elections Office (“SOE”) and other agencies and individuals. Because of the discrepancies and irregularities that have occurred with the November election, we have expanded our investigation to include that election as well.

THE VOTERS OF BROWARD COUNTY NEED TO SPEAK UP AND DEMAND ACCOUNTABILITY, TRANSPARENCY AND CHANGE

The issue of election fraud and corruption in Broward County is not new. In 2011 and 2012, it was alleged that politicians were using ballot “mules” to skew voting results. It was the Broward County Mayor who sounded the alarm about these mules in 2012. However, nothing was done.

Then in 2016, Tim Canova, a candidate for the congressioinal seat held by Debbie Wasserman Schultz, lost and demanded access to certain original voting ballots. After intense litigation, Canova learned that the ballots he was seeking had been illegally destroyed by SOE months earlier. A judge ruled in his favor on that issue and essentially found that Brenda Snipes, head of SOE, had illegally signed off on the destruction of the ballots, which is a felony. Nothing has ever been done to Snipes for this violation of law. WHO IS PROTECTING BRENDA SNIPES AND HER CO-CONSPIRATORS?

Now it is 2018. Two elections in a matter of months have produced a host of problems with the integrity of the electoral process in Broward. It has also raised other issues about public officials trying to influence the voter base and results.

We feel it is important that Broward voters know some of the things we have been told by whistleblowers. To say it is disturbing is an understatement. But we want Broward voters to become activists for change and to stop the corruption of public officials and push for accountability. So we are sharing some of the information provided to us by whistleblowers as examples of how bad things really are in Broward and how some politicians and law enforcement agencies seems to be turning their head the other way to this corruption which has gone on for years.

A judge recently ruled that the counties violated public records laws—and the whole ballot counting process has been done in secret. So, yes, it’s right that Gov. Rick Scott, the Republican U.S. Senate candidate who has declared victory, recently filed a lawsuit over this nonsense. The National Republican Senatorial Committee has also joined the lawsuit.

Marco Rubio on Twitter: Every vote legally cast & received within timeframe required by law should be counted. The issue in #Florida has been the repeated violations of election law by & the incompetence & the lack of transparency of #PalmBeachElections & #BrowardElections. 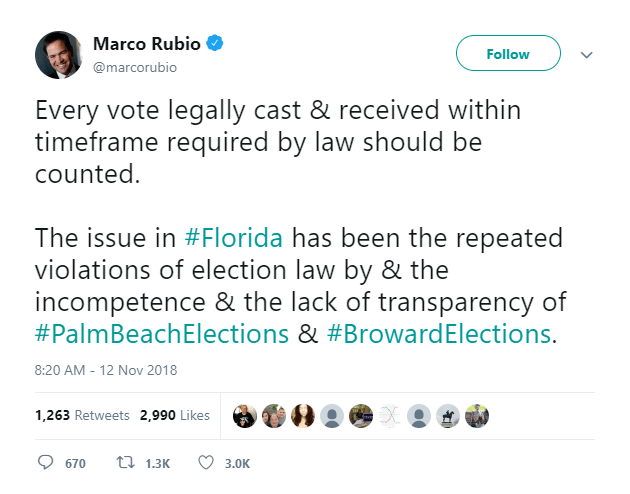 The corporate media is distrusted for exactly this sort of reason: archive.is/GLu1f