Admittedly, it takes quite a bit to raise my blood pressure, but this is one of those real-world issues that does it.  There are a lot of really good people in upstate New York and outside the boundaries of that crazy city they are best known for.  The New York state assembly passing a bill [A416 LINK HERE] to set up involuntary COVID quarantine camps needs to be stopped right now.  This is nuts.

The bill is obtuse in the extreme, and grants the state permission to remove and detain someone defined as “a significant threat to public health.”  Those of you who have watched the creation of Quarantine Camps in Australia, and those who noted the ongoing activity in Australia seems designed to be a beta test for the USA, will quickly see the common thread with this proposal in New York. 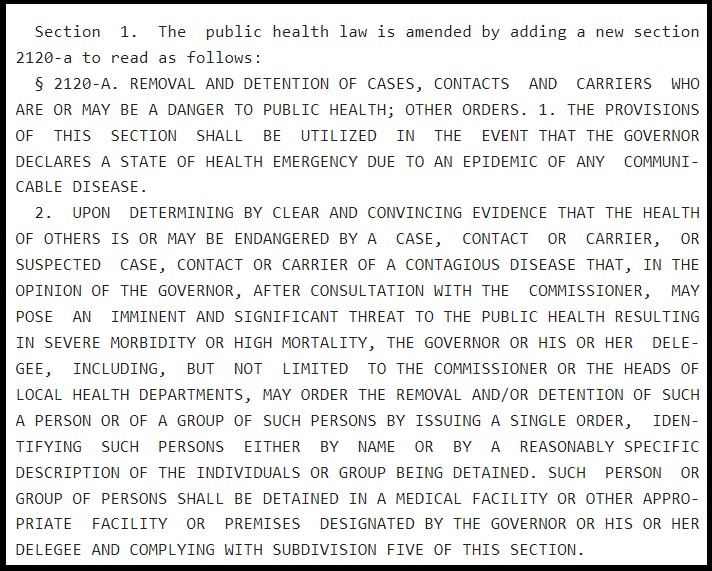 The bill, A416, was originally introduced in January 2021 and made its way into committee.  According to The National Pulse, New York is about to vote on this bill on the floor on January 5, 2022 (about three weeks away).  You can provide feedback directly at the public link to the proposal [SEE HERE]

I am a firm believer in federalism, and the independent right of states to construct their own laws and choices.  However, that said, it is also important for everyone to stand up for our brothers and sisters, regardless of their location behind enemy lines, and assist them in the fight to retain their own freedom when possible.

Good grief, is there anything more anti-freedom than arbitrary power given to a governor and state bureaucracy that will enable the state to force people into detention camps.

The bill also says the government can, “require an individual who has been exposed to or infected by a contagious disease to complete an appropriate, prescribed course of treatment, preventive medication or vaccination.”  That seems like this bill gives the state the right to detain anyone they want and forcibly vaccinate them.

It seems unfathomable that New York citizens would grant the government this much power over their lives.  However, given what we are witnessing in Australia, New Zealand and parts of Europe, our confidence that this New York legislative effort will not succeed is considerably less than it was a year ago.

Sunlight is the best disinfectant.

UPON DETERMINING BY CLEAR AND CONVINCING EVIDENCE THAT THE HEALTH OF OTHERS IS OR MAY BE ENDANGERED BY A CASE, CONTACT OR CARRIER, OR SUSPECTED CASE, CONTACT OR CARRIER OF A CONTAGIOUS DISEASE THAT, IN THE OPINION OF THE GOVERNOR, AFTER CONSULTATION WITH THE COMMISSIONER, MAY POSE AN IMMINENT AND SIGNIFICANT THREAT TO THE PUBLIC HEALTH RESULTING IN SEVERE MORBIDITY OR HIGH MORTALITY, THE GOVERNOR OR HIS OR HER DELE-GEE, INCLUDING, BUT NOT LIMITED TO THE COMMISSIONER OR THE HEADS OF LOCAL HEALTH DEPARTMENTS, MAY ORDER THE REMOVAL AND/OR DETENTION OF SUCH A PERSON OR OF A GROUP OF SUCH PERSONS BY ISSUING A SINGLE ORDER, IDEN-TIFYING SUCH PERSONS EITHER BY NAME OR BY A REASONABLY SPECIFIC DESCRIPTION OF THE INDIVIDUALS OR GROUP BEING DETAINED. SUCH PERSON OR GROUP OF PERSONS SHALL BE DETAINED IN A MEDICAL FACILITY OR OTHER APPRO-PRIATE FACILITY OR PREMISES DESIGNATED BY THE GOVERNOR OR HIS OR HER DELEGEE AND COMPLYING WITH SUBDIVISION FIVE OF THIS SECTION.