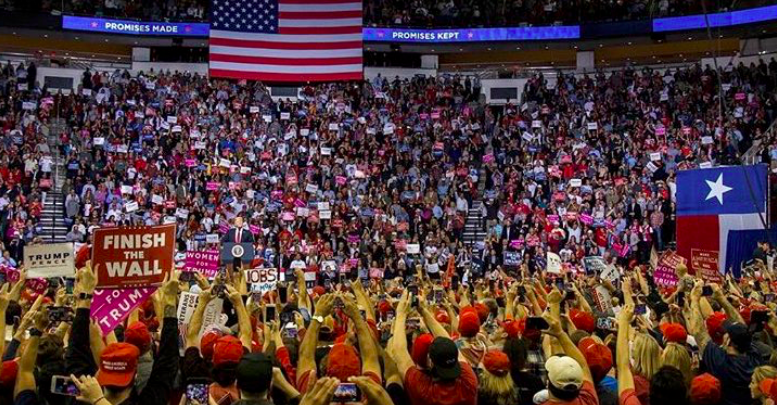 Just two weeks away from the November midterm elections, the first test of President Trump’s staying power, and a new poll from NBC News and The Wall Street Journal found the 45th president’s approval rating at an all time high of 47 percent. This is up 10 percentage points from just six months ago. Why is the Donald finally getting support nationwide? Just look at what he has accomplished and how many promises he keeps.

Even Joe Scarborough is giving the president the credit he deserves.

Here’s what he said of Trump recently:

“I can tell you, especially with Pat, the one that kept winking at Mika and saying ‘Bless your heart,’ she believes that America is in trouble and that Donald Trump is the only one fighting to revive the country. And I know Elise is — I don’t know if you are a fellow former Republican, but at one point we were both Republicans most of our lives. The great frustration with Republicans has been — we elect our Republican presidents, we knock on doors for them, we have blood and sweat and tears for these people, we contribute to them, and then they appoint liberal justices or then they back down and try to make a deal on immigration with Ted Kennedy, then they try to make a deal with Ted Kennedy on education. They do all these things they told us they were not going to do. Because they all tell us they’re going to move the embassy to Jerusalem. They all tell us that. And it all ends up being a lie. And Elise, what they were saying was, ‘Unlike every other Republican president we’ve elected, this guy is doing exactly what he said he was going to do.’”

For all of Trump’s faults as a person and his flaws as the chief executive of the largest bureaucracy and military in the world, he has set out to accomplish what he promised he would do on the campaign trail, in stark contrast to the many politicians who came before him, and already has quite a track record to show for it. He is the most pragmatic president in my lifetime and was elected because he was different, a real changemaker. His first two years in office have revealed his unparalleled ability to fulfill promises he made to his voters.

CNN even put out an article earlier this month pointing to Trump’s recent winning streak.

Stephen Collinson’s analysis of the president’s recent accomplishments starts off with: “Only a re-election party on the night of November 3, 2020, could possibly offer the same vindication for America’s most unconventional commander in chief as the 36 hours in which two foundational strands of his political career are combining in a sudden burst of history.”

He is referring to the pivotal confirmation of Judge Brett Kavanaugh to the Supreme Court, a travesty that unearthed just how far Democrats will go to score political points. The establishment of a conservative majority on the highest court in the land was one of Trump’s biggest campaign promises and was likely the number one reason why millions of Americans bit the bullet and voted for the Donald two years ago.

In that same week, Trump touted the best jobs data in 49 years. The economy was the number one selling point for the real estate developer turned chief executive. If it’s all about the economy, then Republicans have a good chance of surprising the pundits in a couple weeks by holding onto both the House and the Senate. Trump delivered a sizable tax cut to millions of Americans at the end of last year and has installed a deregulatory regime to help small and large businesses alike succeed and hire more people throughout his time in office. The president stuck with Kavanaugh as he did with the tax cuts and deregulation, and he is crafting an enticing message for Americans to vote Republican on November 6th.

“So,” Collinson writes, “he has every right to return to voters in the next four weeks ahead of the midterm elections to argue he has done exactly what he said he would do. He now has a strong message to convince grass-roots Republicans that it’s well worth showing up at the polls.” We will find out soon whether the country likes what they see or want to put a stop to the president’s accelerating agenda.

Sure, Trump lies all the time and uses hyperbole on a daily basis. He’s a politician now. He’s from New York. He can’t help it.

“But when it comes to the real barometer of presidential truthfulness — keeping his promises — Trump is a paragon of honesty,” Thiessen claims. “For better or worse, since taking office Trump has done exactly what he promised he would.”

What promises has he kept? Here’s a comprehensive list. Like the moves or not, he does what he says he is going to do.