“In an explosive new development in the Florida election process, a provisional ballot box from the Broward County Supervisor of Elections Office was discovered in the back of a rental car by an Avis employee at the Fort Lauderdale Airport on Sunday night.

I received a tip around 6 pm from a political insider that an Avis employee contacted the police at the Fort Lauderdale airport, on Sunday evening, alerting them to the provisional ballot box. However, the airport police reportedly didn’t want to touch the SOE ballot boxes, prompting the AVIS employee to contact Richard Denapoli, the Broward County GOP state committeeman, who quickly made his way over to the airport to meet the Florida Department of Law Enforcement (FLDE) where he began filming and taking pictures as officers were claiming there was a “bomb threat” at the airport.

Pictures taken at the scene show two boxes. One box is red, and the other is grey. The grey box is labeled “PROVISIONAL BALLOT BOX” with a sign that says “Broward County Supervisor of Elections”, a purple tag that says “ERT region 13”, and a backwards yellow tag with a seven digit numerical and five letter code.

According to the Avis employee, the rental car was last driven by Noah Holliman, whose has an @broward.org email address connected to his Florida voter registration profile.

Nearly 20 minutes after receiving the tip, a heavy police presence blocked off traffic and surrounded entrances of the Ft. Lauderdale Airport, located at the epicenter of elections fraud: Broward County.

READ  Progressive policies in action: Homelessness in LA County expected to skyrocket by 86% in next 4 years

“Our deputies and bomb squad are responding to a suspicious package outside Ft. Lauderdale Airport Terminal 4.”

However, this reporter knew ahead of this tweet that a provisional ballot box was discovered in an AVIS rental car that was dropped off at the airport and subsequently I made my way over to the airport, only to be blocked by a police officer who is on video telling me the airport might be shut down for n hour or two.

Upon confirming with DeNapoli that the boxes were indeed labeled provisional ballots, I immediately informed the public that Broward County Sheriff’s Officers were on the scene filling out a police report and documenting the ballots, whereas local and national media were totally silent on the discovery of the ballot box in an apparent media blackout.

Why was there a media blackout on a suspicious package being delivered to the airport, when in reality officers appear to have been aware from the beginning that this was a provisional ballot box according to the AVIS employee speaking with Denapoli, who contacted FDLE?

“The AVIS employee didn’t know what to do. No one wanted to touch the boxes or take responsibility for them. Finally, sheriffs deputies agreed to take the provisional ballot boxes into their custody. It’s an odd situation when supervisor of elections (SOE) employees are so careless with important election materials, but its becoming a trend in Broward County.”

I met up with Denapoli after video and photographic evidence was taken of these provisional ballot boxes that were left at the airport. We met at the Broward County Supervisor of Elections office, the epicenter of this national outrage, to see if Broward sheriffs deputies were going to transfer the custody of the provisional ballot boxes to the Supervisor of Elections, or hold them for processing overnight.

Denapoli sounded the alarm from the site of the AVIS rental when upon hearing I was on the case. He began filming the provisional ballot boxes along with the Broward County police response, while the “media” was in Terminal 4 reporting on a non-existent bomb threat that was literally tweeted from the official Twitter account of the Broward Sheriffs Office. Meanwhile, there was never a bomb.

Well, it gets worse–Noah Holliman, the Broward County employee who dropped off the rental car with boxes of provisional ballots is friends with Sheriff Scott Israel on Facebook.

But wait, there’s more! Holliman also appears to be tied to Democrat gubernatorial candidate Andrew Gillum, who lost his election to Congressman Ron DeSantis, but revoked his concession speech on Saturday “unapologetically.”

Coincidentally, Gillum was hosting a campaign event at the Mount Olive Baptist Church in Fort Lauderdale on Sunday night, which is located less than 20 minutes away from the Fort Lauderdale airport.” 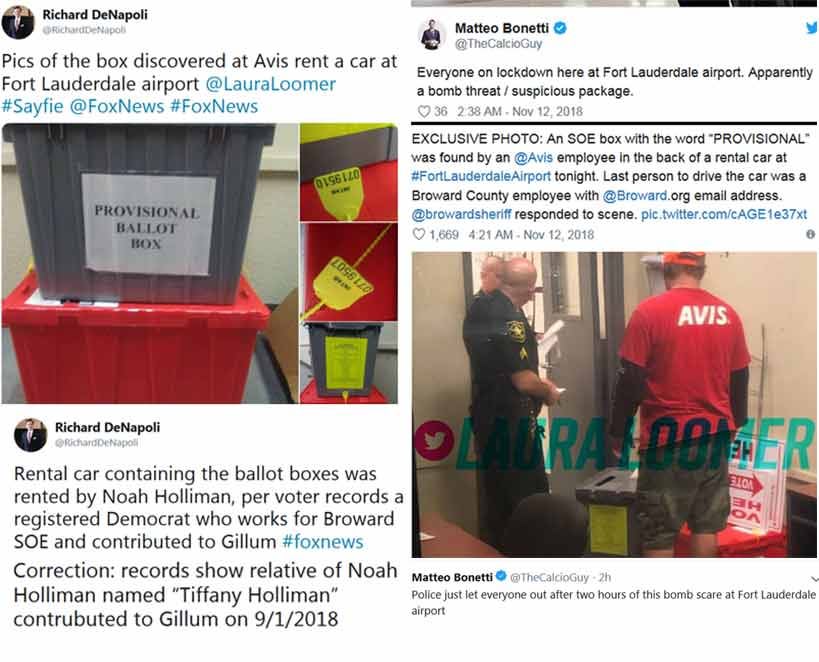