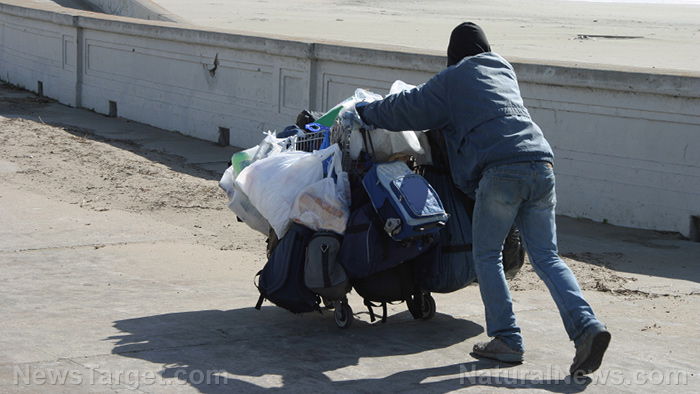 (Natural News) Even though places like San Francisco and Los Angeles typically get the most attention, out-of-control homelessness is also a major problem in Sacramento, California’s capital, where human feces, urine, trash, and drug needles are reportedly piling up all across the city at an exponential rate.

The Democrat stronghold, and the locale from which Governor Gavin Newsom rules California, is said to currently have about 5,570 homeless people living on its streets – a figure that’s 19 percent higher than just two years ago, illustrating how quickly homelessness is spreading across the Golden State.

With about 130,000 homeless people in total, California leads the pack in societal failure and economic collapse. And Sacramento is quickly becoming one of California’s many ground zeros for rampant homelessness, which is starting to drive away local businesses that can no longer operate successfully due to all the blight.

“I just want to tell you what happens when I get to work,” stated Liz Novak, a local salon owner, to the media about what she’s had to deal with trying to conduct business in Sacramento.

“I have to clean up the poop and the pee off of my doorstep. I have to clean-up the syringes. I have to politely ask the people who I care for – I care for these people that are homeless – to move their tents out of the way of the door to my business.”

Things became so bad for Novak that she finally decided to close up shop and move somewhere else in the hopes that things might improve. But with the way things are going, the homeless problem in California is likely to continue growing and spreading to other cities and towns, as well as into more rural areas.

“I am angry about it,” Novak added about having to move her business. “I wouldn’t be relocating if it wasn’t for this issue.”

For more related news about the impending collapse of California and America at large, be sure to check out Collapse.news.

As it turns out, the vast majority of Sacramento’s homeless population, around 93 percent, are natives who grew up in Sacramento and used to live in real houses. But because of skyrocketing housing prices and a decrease in economic opportunities, many of these folks decided to just hit the streets and make a “living” there instead.

For people like Cali Carlisle, a local homeless person in Sacramento, this means shooting up heroin all day long and lounging around wherever she can find a place to sit or lie down.

“All we do is lie around, eat ice cream, have sex, and take drugs,” Cali told the media during an interview. “Man, I love ice cream,” she added.

Other local homeless like Brian Workman relocated to San Francisco from nearby San Jose due to the extremely high housing prices in the Bay Area. He had originally come there with a friend who worked for Netflix, and was given money from the IPO to get settled. But after a falling out, Workman ended up on his own, and eventually homeless, as things went south.

“We had a falling out and I moved here because it was cheaper,” Workman said. “I got married in 2005 and had a couple of kids. I was married for nine years. But then my father-in-law came to stay and there wasn’t room and I was paying rent for an apartment but couldn’t live there.”

“I needed a hearing aid that cost $3,000 but I couldn’t afford it,” he added. “It’s really difficult to keep work if you can’t hear. So I ended up on the streets.”

You can read a more in-depth report about the homeless crisis in Sacramento at this link.