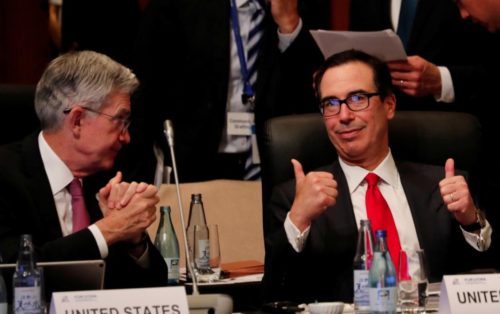 The most interesting thing about what the Fed is now doing is that it is illegal. The Fed’s argument that it is not monetizing the US debt fails now on its own terms. The Fed is buying treasuries for no purpose other than to directly finance the government’s escalating debt. Here’s the deal:

The drastic moves by the Feds and Fed throughout 2020 sidetracked us without any discussion straight into Modern Monetary Theory, which claims the government can create as much debt as it wants forever and the Fed can directly finance that debt forever with the only bound being the restraints of inflation.

The Fed’s absolutely massive reverse repo operations (used this month to extract half a trillion dollars in cash money out of the system!), done at the same time the Fed is creating money in the system, leave us with no question that the Fed is directly financing the government and monetizing its debt at whatever level the government demands (with almost no restraint on the government’s part for its role).

The Fed is financing the government at this level to save the nation from the economic devastation caused by the government-mandated COVID closures of 2020, but it is doing it at the cost of crushing monetary policy. No one in the main financial or political media is calling the Fed out on this outright debt financing, and no one is likely to care because everyone quietly realizes the entire economy and all markets would crumple into the dust if the Fed stopped doing what it is doing.

What they don’t allow themselves to realize is that this situation predictably developed because the Fed has been creating total economic dependence on itself for the last decade. We are now witnessing the terminus of years of bad Fed policy that piled up as the Fed tried to centrally control the US economy under its own superior intelligence as to what is best for markets. (At a level that has made Chinese central planning look like the “B” team.)

Most financial writers and political writers wore blinders to block out that reality throughout the long period over which the Fed tried to create a recovery from the Great Recession. I have always argued they were creating a permanently Fed-dependent recovery that could never withstand the Fed’s withdrawal of stimulus money and never withstand the next major financial crisis.

Let me explain the economic denial I am getting at

While all astute and honest people knew the Fed was financing the government debt for years, the Fed USED TO be able to somewhat reasonably argue it was not buying treasuries illegally to finance the government but that it only bought treasuries as a way of setting monetary policy. It could make that argument on the basis that the Fed does not directly set market interest rates by mandate. It sets rates by buying and selling financial instruments on supposedly open markets to manipulate interest rates by controlling supply and demand. (The Fed wouldn’t use the term “manipulate,” but that has always been what it is doing.)

Now all pretense is gone! What the Fed is doing now CLEARLY has nothing at all to do with executing monetary policy. That argument vanished completely this month because the Fed’s purchases of treasures are now actually driving monetary reality totally out of whack from the Fed’s own stated policy goals.

The Fed’s absolutely massive treasury purchases in recent months are driving interbank lending rates to press below the zero bound that the Fed has set as its target. As a result, the Fed is now having to do half a trillion dollars in overnight reverse repos (effectively reselling those treasuries to banks at record levels) just to keep foundational interest rates from going negative due to all the treasuries the Fed is soaking up.

That leaves not even a hint of room for the Fed to claim it is only buying treasuries as a way of setting market interest rates. The Fed, is in fact, doing it SOLELY to finance government debt (“monetize” the debt) because the government switched to Modern Monetary Theory without discussion at the start of the COVIDcrisis, distributing bucket loads of helicopter money straight to the masses and directly to corporate aid, which it demands its banker (the Fed) finance.

To what extreme is the Fed having to intervene to control the monetary damage its own funding of government debt is causing?

Take a look at the following graph published by one of my favorite financial writers, Wolf Richter: (And note that all previous highs happened only at quarter-end or year-end interventions when huge volumes of bank rebalancing take place, which is not the situation now.)

It’s a crazy situation the Fed backed into as tsunami of liquidity goes haywire, banking system strains under $4 trillion in reserves.

…With these reverse repos, the Fed is selling Treasury securities to counterparties and is taking their cash, thereby massively draining liquidity from the market – the opposite effect of QE….

Even as liquidity is going haywire, and as the Fed trying to deal with it via reverse repos, the Fed is still buying about $120 billion per month in Treasury securities and mortgage-backed securities, thereby adding liquidity.

Why is it doing that? Obviously, the treasury purchases are for no other reason than to fund the government bloated budget of stimulus programs. The economy clearly doesn’t need the extra money, or the Fed wouldn’t be sucking it out the other end of the pipe. It’s overnight repos have undone four months of its QE. So, the QE is not needed; but it is financing the government and hyper inflating the housing market (again).

This liquidity-haywire situation appears to be an emergency that needs to be addressed now, and so the Fed is addressing it through the backdoor via the overnight reverse repos.

How overFed have bank reserves become as the Fed finances the government?

Bank reserves have gone up because the government, under Yellen’s new treasury regime, has been recently spending the huge amounts of money it borrowed through the Fed last year. When the government spends money, it does so by transferring money to pay for all the items and services it buys from its Federal Reserve bank account to the reserve accounts of the Fed’s member banks. The flood of Fed-financed money, once banked by the treasury at the Fed for government programs, is now passing through the system. The flood crest is moving down the river and literally overflowing the banks.

See also  BTC is up nearly 40% since Jim Cramer said to get out 14 days ago. Inverse Cramer never fails.
Trending: Views: 21