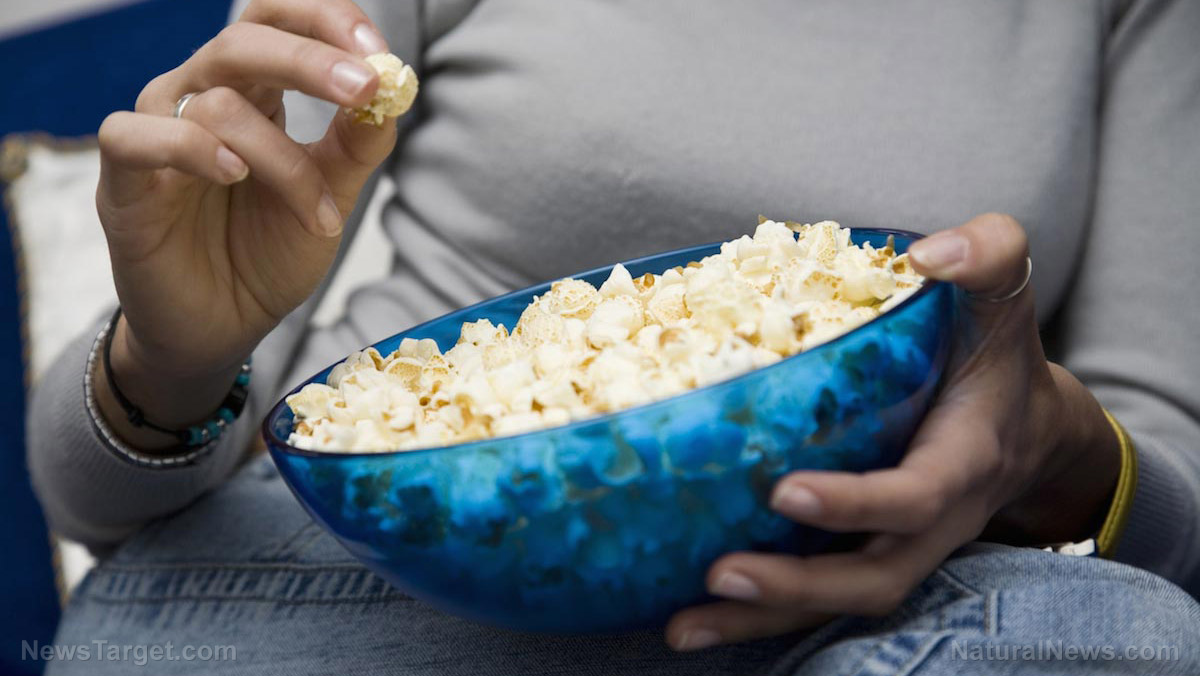 (Natural News) When it comes to snacking, popcorn is usually thought of as one of the healthier snacks out there. It’s low in calories, rich in antioxidants, and offers a satisfying way to get your daily fill of whole grain goodness. But that’s if you opt for plain, air-popped popcorn. According to LiveScience.com, microwave popcorn is anything but healthy, thanks in part to some dangerous hidden chemicals.

The damage you don’t see

Diacetyl is a common food additive most often used to imbue popcorn with a creamy, buttery flavor. It’s made by extracting hydrogen from 2,3-butanediol, a naturally-occurring substance and byproduct of sugarcane molasses fermentation. Although delicious when added to popcorn, diacetyl was all but phased out of popcorn production by the early 2000s due to its dire effects on the health of factory workers.

In 2005, a report pointed to diacetyl as the primary cause of severe obstructive lung disease in eight former workers of an unnamed microwave popcorn packaging plant. The study, conducted by researchers from the National Institute for Occupational Safety and Health (NIOSH), noted how workers were exposed to a variety of volatile organic compounds, with diacetyl being one of the most prominent. Further studies only supported these findings, with some finding out that heating up diacetyl could result in damage to the cells covering the lungs and trachea. (Related: Microwave Popcorn Flavoring Fumes Linked to Lung Disease.)

As a result, numerous popcorn companies swore to remove diacetyl from their products. It was eventually replaced with 2,3-pentanedione and 2,3-hexanedione. However, as a 2016 rat study revealed, these two organic compounds were actually no better than diacetyl. All three substances caused the test rats to develop bronchial fibrosis, a respiratory disease wherein scars form in lung tissues and lead to more severe breathing problems. In particular, the effects of 2,3-pentanedione were on par with that of diacetyl.

Speaking to LiveScience.com, NIOSH researcher Ann Hubbs explained that these compounds harm the respiratory system by damaging the proteins in the lining. “The chemicals react especially readily with an amino acid called arginine,” said Hubbs. The reaction that occurs from the contact between the compounds and arginine weakens and scars the alveoli or the tiny air sacs of the lungs.

How to have your popcorn and eat it too

Fortunately, avoiding these chemicals is an easy feat. The key is to steer clear of prepackaged microwave popcorn. Instead, purchase unpopped popcorn kernels and make your own at home. You could cook it on the stovetop with your oil of choice, but you still risk heating up fats that could cause health problems in the long run. Air popping is the way to go with popcorn since you basically steam it without the need for oils.

Electric air poppers can be bought for a decent price. But, if you’d much rather approach popcorn popping with traditional flair, you could also air pop it on the stove. For this, you’ll need a two-quart, nonstick pot with a lid:

Visit StopEatingPoison.com for more news on food safety and health.