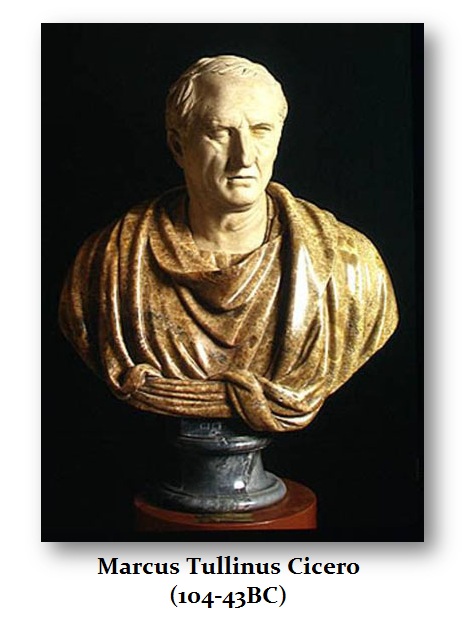 When the oligarchs assassinated Caesar and Cicero put out a never-ending onslaught against Gaius Julius Caesar (100-44 BC), Brutus (85-32 BC) issued a coin promoting that he killed Caesar on the Ides of March for the people. This was an early propaganda coin. However, in fact, the people supported Caesar against the oligarchy.

The Senate had to flee Rome because the people did not support them. As for Brutus, Suetonius (Divus Augustus, 13) says that the head of Brutus was sent to Rome to be thrown at the feet of Caesar’s statue.

Perhaps the greatest of all fake news reporters was none other than Cicero (104-43 BC). He was an Optimat and thus was against Julius Caesar (100-44 BC) who was a member of the Populares — the people rather than the Oligarchs. The leader of the Optimates was none other than Cato. It was Plutarch who reported that when a friend of Cicero remarked that the constellation of Lybra was due to rise the next day, Cicero snapped – “Yes, by edict.”

This is merely an example that the Optimates were constantly complaining about every reform Caesar would make including the calendar which they would bribe the priest to delay elections. Because of the fake news of Cicero, even Shakespeare bought into it and painted Julius Caesar as a ruthless dictator. However, when Caesar crossed the Rubicon, the cities all cheered and opened their gates. The Optimates had no support of the people for they were exploiting the Republic since they were the Oligarchs. It was Cato who instigated the Civil War. 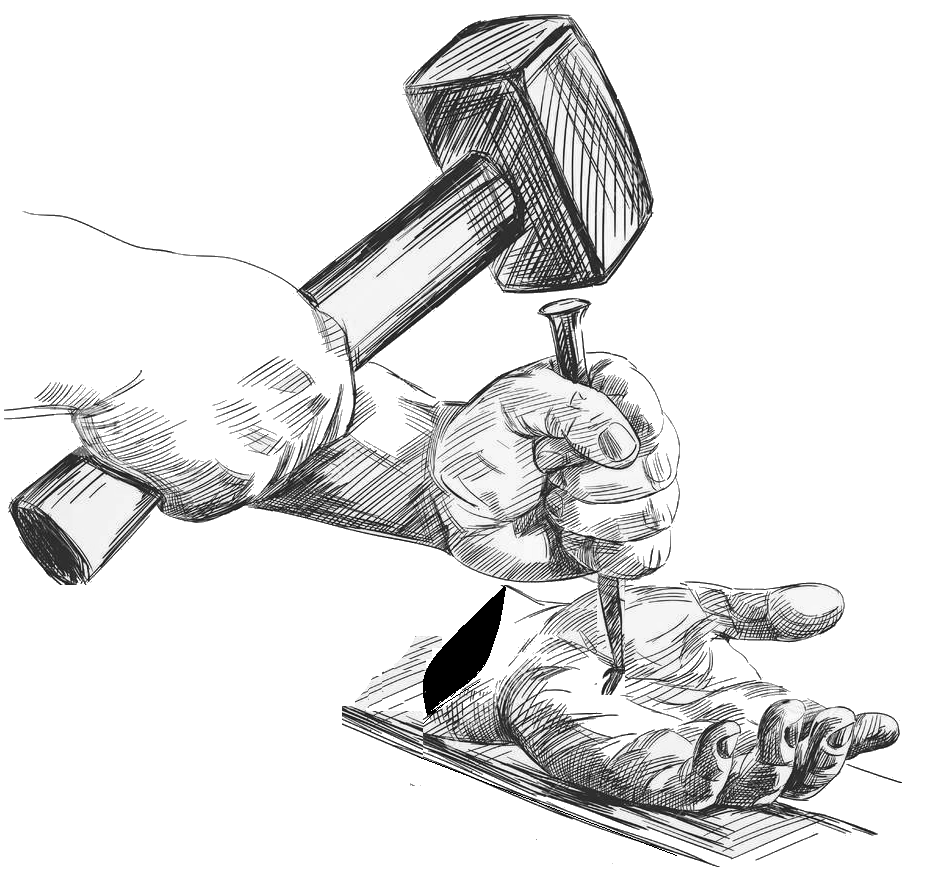 Cicero paid not just with his life, but they cut off his hands and nailed his head on the Rostra in the Forum Romanum according to the tradition. According to Cassius Dio, Marc Antony’s wife Fulvia took Cicero’s head, pulled out his tongue, and jabbed it repeatedly with her hairpin in an act of final revenge against Cicero’s power of speech.

Every ruthless government in history has used the media for propaganda. This has been an ancient practice. Following the death of Nero, that was the end of the Julio-Claudian line. People jumped for joy and may believe that the Republic would then be restored. This is also when the Jews rebelled and thought they could now move to be independent and exist the Roman Empire. After a civil war, the military general Vespasian (69-79 AD) rose to power defeating his rivals. The Romans used the reverse side of the coins as newspapers announcing various events and victories. Vespasian had to crush the Jews or risk that other previous conquered lands might try the same solution of rebellion. The coinage of Vespasian marked the defeat of Judea and he proudly announced – “CAPTIA” proclaiming their defeat as a warning to all other provinces. 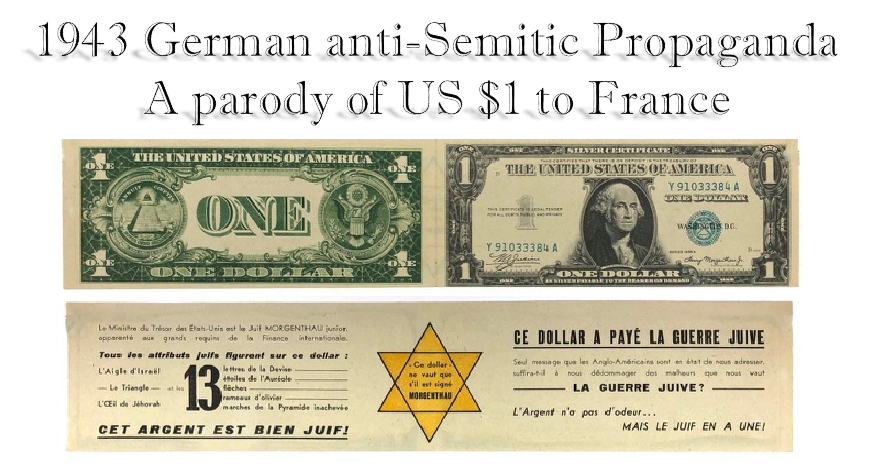 In October 1943, French citizens awoke to find the streets of Paris were littered with the United States $1 Silver Certificates of 1935. The French were overjoyed believing that Americans from the land where the streets were paved in gold,  had showered them with dollar bills following the defeat of the German occupation forces. However, upon close examination, not only did all the bills have the same serial number Y91033384A, but they unfolded, and inside was propaganda.

The front and the back of the folded leaflet were excellent reproductions of the genuine one-dollar bills. Inside was a vicious attack upon the United States and Judaism. The propaganda read:

This dollar is valid only if signed Morgenthau. The Minister of the United States Treasury is the Jew Morgenthau Junior, allied to the big sharks of international finance. All the Jewish symbols appear on this dollar: the Eagle of Israel, the Triangle, the Eye of Jehovah and the thirteen letters of the device, stars of the halo, arrows, olive branches and steps of the unfinished pyramid. This money is certainly Jewish! This dollar has paid for the Jewish war. The only message that the Anglo-Americans are able to address to us is: Will this dollar be enough to compensate us for the sorrows caused by the Jewish war? Money has no smell … but the Jew has one!”

Propaganda has been a powerful tool that has torn society apart and always seeks to divide and conquer. 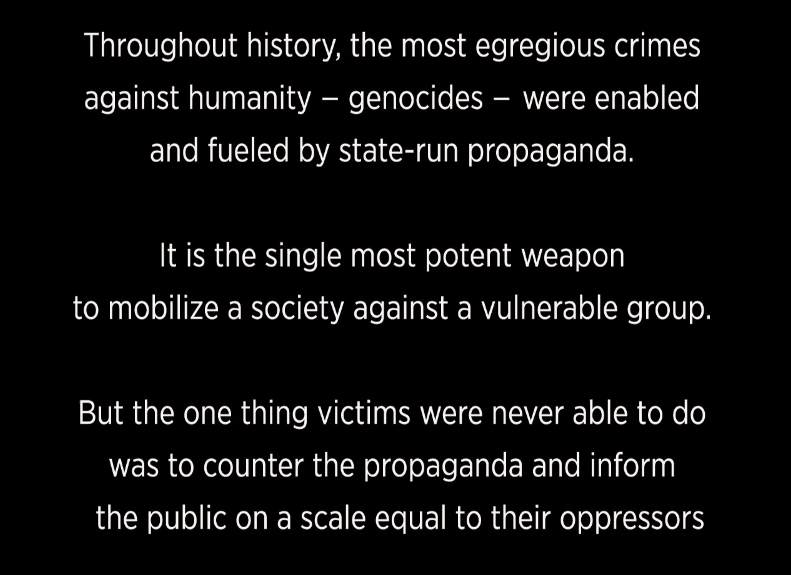 This is the danger that mainstream media now threatens our very future. They are shameless and never reflect that what they are doing leads only to one conclusion. Why is CNN, the New York Times, and The Washington Post, the leaders of this cabal, joined by ABC, CBS, and NBC, acting in such a treasonous manner? What is the end objective? Sterilized genocide to save the planet? Chelsea Clinton, who Hillary is grooming for 2024, is now openly calling on Facebook to SILENCE Tucker Carlson. Such a move shows a complete disregard for the First Amendment and even Bill Gates advocating silencing all his critics — the “crazies” he calls them. Anyone who advocates silencing their opposition is a traitor to everything the American dream and Constitution stood for and generations were asked to lay down their lives to protect. These people have no place in a democratic society.

Free speech protected by the First Amendment. This means that I must respect that even Communists have a right to speak, for if I do not defend their right to speak, then I myself have no right to speak. Silencing the opposition is ruthless tyranny. Just look at history. It warns us of people like Chelsea Clinton and Bill Gates.