I am surprised to learn that Joe Biden owns an island, called Water Island, across from the late Jeffrey Epstein’s Island.  There is an old submarine base there, and Ghislaine Maxwell is connected with a submarine company in the same area.

One of the greatest investigative journalists of all time, George Webb, just reported on these shocking facts.  That would mean if Biden won the Presidency, we would have a President who has some hidden life aspect we knew nothing about.

Take a look at the trip George Webb took to report on Water Island.

I ran across this on a new search engine I have been using. And by the way, I love it. It is called Yandex.

I have discovered a new report and video about Covid – 19.  It is quite fascinating, and, if true,  explains how it was pulled off to spark a society reset.

For a very long time, a cult…if one could imagine…possibly with someone like Bill Gates at the head of the pyramid…has manipulated the world.  That cult decided the United States had to come into submission.  China was the role model, and the only way to move the US into the same place was a societal reset.   Enter the Wu han virus.

Gates has always spoken about population control as a-matter-of-fact.  He demands lockdown, and he has told us about how important vaccines are – we must have the vaccine for Covid-19 when it is discovered.  How adamant he has been. Gates has been the puppet master, while Fauci has been the puppet.

This excellent video presentation gets it all right
except that there really is a bioweapon at work;
maybe not a virulent coronavirus but a mix of
bioengineered infection agents nevertheless.

Please watch the Video.  It explains what I believe happened to thrust us into a surreal environment. Just keep the faith. It is not over. 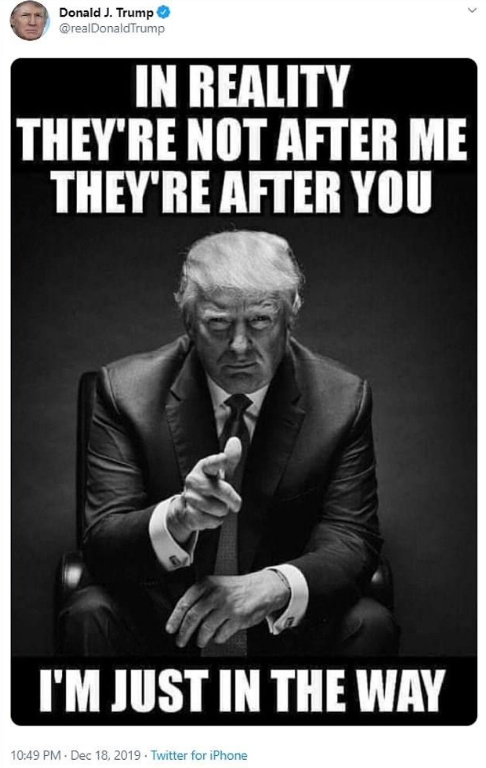 By the authority vested in me as President by the Constitution and the laws of the United States of America, it is hereby ordered as follows:

Section 1.  Purpose.  One of the reasons pharmaceutical drug prices in the United States are so high is because of the complex mix of payers and negotiators that often separates the consumer from the manufacturer in the drug-purchasing process.  The result is that the price

companies, actually pay for drugs.  Instead, these middlemen — health plan sponsors and pharmacy benefit managers (PBMs) — negotiate significant discounts off of the list prices, sometimes up to 50 percent of the cost of the drug.  Medicare patients, whose cost sharing is typically based on list prices, pay more than they should for drugs while the middlemen collect large “rebate” checks.  These rebates are the functional equivalent of kickbacks, and erode savings that could otherwise go to the Medicare patients taking those drugs.  Yet currently, Federal regulations create a safe harbor for such discounts and preclude treating them as kickbacks under the law.

Fixing this problem could save Medicare patients billions of dollars.  The Office of the Inspector General at the Department of Health and Human Services has found that patients in the catastrophic phase of the Medicare Part D program saw their out-of-pocket costs for high-price drugs increase by 47 percent

from 2010 to 2015, from $175 per month to $257 per month.  Narrowing the safe harbor for these discounts under the anti-kickback statute will allow tens of billions in dollars of rebates on prescription drugs in the Medicare Part D program to go directly to patients, saving many patients hundreds or thousands of dollars per year at the pharmacy counter.

Sec. 3.  Directing Drug Rebates to Patients Instead of Middlemen.  The Secretary of Health and Human Services shall complete the rulemaking process he commenced seeking to:

)  exclude from safe harbor protections under the anti-kickback statute, section 1128B(b) of the Social Security Act, 42 U.S.C. 1320a–7b, certain retrospective reductions in price that are not applied at the point-of-sale or other remuneration that drug manufacturers provide to health plan sponsors, pharmacies, or PBMs in operating the Medicare Part D program; and

Sec. 4.  Protecting Low Premiums.  Prior to taking action under section 3 of this order, the Secretary of Health and Human Services shall confirm — and make public such confirmation — that the action is not projected to increase Federal spending, Medicare

Sec. 5.  General Provisions.  (a)  Nothing in this order shall be construed to impair or otherwise affect:

(i)   the authority granted by law to an executive department or agency, or the head thereof; or

(ii)  the functions of the Director of the Office of Management and Budget relating to budgetary,

(b)  This order shall be implemented consistent with applicable law and subject to the availability of appropriations.

(c)  This order is not intended to, and does not, create any right or benefit, substantive or procedural, enforceable at law or in equity by any party against the United States, its departments, agencies, or entities, its officers, employees, or

agents, or any other person.