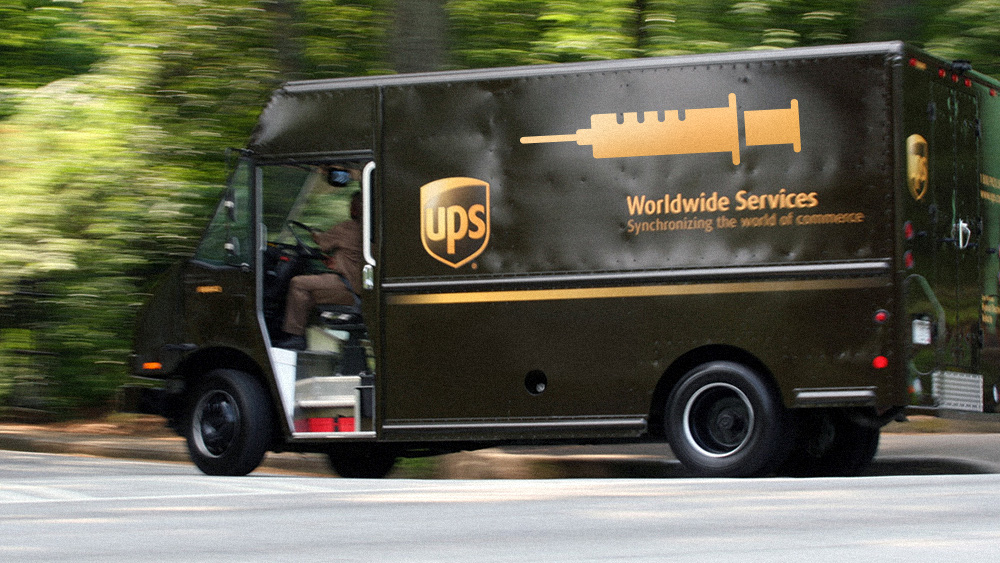 (Natural News) Just when you thought corporate America couldn’t get more insane when it comes to medical tyranny, UPS has announced a pilot project to deliver vaccines to your home, then have you injected by “health care professionals” without you ever having to leave your living room. Merck, makers of the risky vaccine Gardasil, is reportedly partnering with UPS to carry out this door-to-door vaccine initiative.

“The world’s largest package delivery firm is preparing to test a U.S. service that dispatches nurses to vaccinate adults in their homes,” Reuters is now reporting. Reuters explains how the project will work:

Workers in UPS’ 1.7 million-square-foot healthcare complex at Worldport will package and ship the vaccine to one of the more 4,700 franchised U.S. UPS stores. A home health nurse contracted by UPS’ clinical trial logistics unit known as Marken will collect the insulated package, transport it the “last mile” to the patient’s home and administer the vaccine, which will target a viral illness in adults.

Note that they don’t dare ship the vaccine directly to your home, because they don’t want individuals having access to vaccine vials without a “home health nurse” present to inject you with it. Vaccine vials might be dangerous, the thinking goes. They’re only “safe” after they’re injected into your body, at which point all health risks magically vanish.

The partner for this, Merck, has a long history of engaging in nefarious behavior, including bribing doctors, price fixing its drugs and pressuring state and federal lawmakers to enshrine its unethical profit model into law. Reuters explains why Merck is the perfect partner for UPS, since they both only care about money:

Merck, a major UPS healthcare customer, has a portfolio of vaccines for viral illnesses ranging from shingles and hepatitis B to the flu. Spokeswoman Pamela Eisele said the company is considering the project as it looks for new ways to increase access to its medicines and vaccines and boost adult vaccine rates.

The logistics company behind all this is called “Marken.” And as Reuters reports, Marken is already involved in medical experiments on human subjects. “Pharmaceutical companies already pay Marken to give vaccines to patients testing their experimental drugs,” reports Reuters:

Cathy Morrow Roberson, who founded consulting firm Logistics Trends & Insights after working for more than a decade as an analyst at Atlanta-based UPS, said the vaccine project taps the assets and expertise the company has acquired since getting into healthcare in the early 2000s. “They’re reaping the benefits of all the acquisitions and investments they’ve made,” she said.

And there you have it: It’s all about the profits. If vaccines and pharmaceuticals are where the money’s at, UPS is going to follow the money, throwing corporate ethics aside. If this trend continues, it won’t be long before UPS trucks offer “mobile chemotherapy services” to inject everybody with what will surely be called “preventive chemotherapy,” even if you don’t have cancer.

There’s big money in vaccine mandates, since you’d be forcing everybody to buy a product essentially at gunpoint. “[T]he average cost of a shingles shot was $208.72 at a doctor’s office and $168.50 at a pharmacy,” reports Reuters. Now, if they could only mandate all these vaccines by declaring medical martial law all across the country, the pharmaceutical giants would have guaranteed trillions in revenues every year (and UPS could take a piece of that pie by profiting from the logistics of delivering and injecting all the toxic vaccines that people don’t need). (Read MedicalExtremism.com for more reporting on extreme, radical medicine administered at gunpoint.)

Vaccines, of course, harm and kill children every year across the United States and around the world. This irrefutable fact is openly admitted by the federal government itself, which publishes quarterly vaccine injury and death statistics via Health and Human Services: VAERS.HHS.gov. (You can download the Excel spreadsheet there and see some of the numbers for yourself.)

The entire corporate-controlled media, of course, pretends that vaccines never harm anyone. They don’t report a single case of vaccine injury, and they work to systematically ban all vaccine awareness information across social media, search engines, news media and even entertainment programming. As we have previously reported, the CDC actually has a propaganda fund that it uses to pay screenwriters to embed pro-vaccine messages into Netflix programs, sitcoms, standup comedian routines and Hollywood movies.

With this move to deliver and inject vaccines in the homes of its customers, UPS is declaring that grabbing a piece of the “home health services” market is more important than operating with ethics. The idea of UPS wanting to inject everyone with vaccines to make an extra buck will not only frighten many customers; it will motivate them to avoid having anything shipped to their homes via UPS.

UPS drivers, who are now seen as relatively friendly, helpful professionals, will soon be viewed as vaccine predators as the company pushes them to start interfacing with home residents by asking questions such as, “Have you had your flu shot yet?”

In the bigger picture view, by rolling out this pilot program, UPS is actually building a vaccine mandate medical police state infrastructure where UPS drivers will act as medical fascist spies, reporting to Merck (and the CDC, of course) on customers who refuse vaccine shots. UPS drivers will be the snitches for the medical police state, and as more states follow the horrifying example of California pushing vaccine mandates (SB 277) to deny children the right to public education unless they are injected with every toxic substance mandated by the state, UPS will quickly morph into the delivery-and-injection enforcement arm of the medical police state.

No doubt this will eventually result in ride-along “vaccine enforcers” (i.e. medical police) who spy on UPS deliver customers and demand, “Show me your vaccine papers!” or face imminent arrest. Recently in Chandler, Arizona, a SWAT team staged an armed assault on a family to medically kidnap children who were unvaccinated and had a mild fever. This is what the medical police state looks like, and this is exactly what UPS is signing up for.

Here’s what the vaccine police / SWAT team in Chandler looked like as they kicked in the front door and kidnapped children while terrorizing a mother at gunpoint: 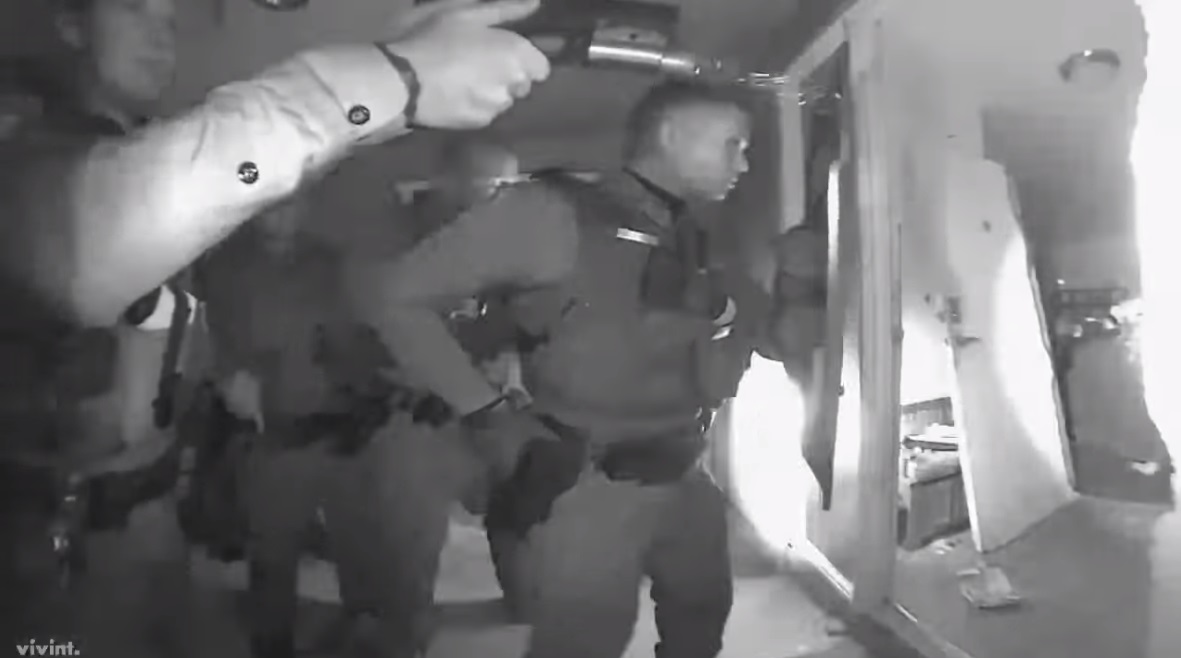 If you doubt that this is happening, you’re wildly uninformed. Rockland County, New York has already announced medical martial law and threatening six months in prison for any person under the age of 18 who steps foot on a public sidewalk, attends a public school, enters a church or a mall without first being vaccinated, even if they have already acquired strong natural immunity by overcoming the measles without a vaccine.

The Rockland County medical martial law rollout was a test scenario to see if the public would accept a “show me your vaccine papers” medical police state without protesting. Because the sheeple went right along with it, the program will shortly be expanded to more counties and states.

UPS will be right there, ready to surveil its own customers, ready to inject them with vaccines and happily raking in profits from the pharmaceutical industry. This makes UPS the front-lines militant wing of Big Pharma, and it puts UPS drivers in the position of pushing toxic substances that even the U.S. government openly admits maim and kill children and adults every year in the United States.

Is this really the business UPS wants to be in? The business of maiming and killing people for profit? Delivering psychiatric drugs to children? Pushing chemotherapy (chemical weapons) in living rooms? Dishing out statin drugs, diabetes drugs and blood pressure drugs that kill 100,000 Americans a year?

Make no mistake: If UPS pursues this line of business, Natural News and the entire independent media will call for a nationwide boycott of UPS, and our tens of millions of readers will demand all shipments be delivered via Fedex or USPS rather than invite a vaccine snitch UPS driver onto their front porch.

Partnering with Big Pharma is partnering with the “death business.” If that’s how UPS wants to make money in the future, it will find itself having no future at all. People want UPS to deliver packages and that’s it. They don’t want UPS pushing vaccines, medication, chemotherapy and whatever else they’ll come up with next.