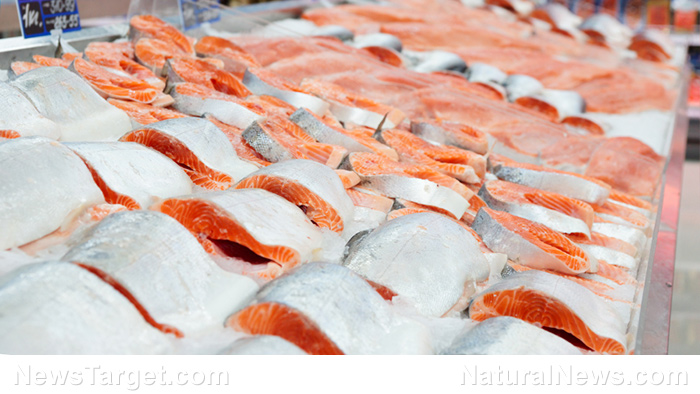 (Natural News) One out of every three seafood products purchased from Canadian retailers is likely mislabeled. These are the results of a new study from the University of Guelph. The research reveals fraud throughout the seafood supply chain in Ontario. Fraudulent labeling practices were revealed at the import stage, at the processing plants, and all the way to the retailers.

In all, the researchers investigated twelve different species of fish. They collected fifty-one samples of fish from importers, eleven samples from Ontario processing plants, and one hundred forty-one samples from retailers. After tracing the packages to their origin, the researchers found that 32 percent of the samples were mislabeled. Broken down, the mislabeling was most prevalent at retailers (38.1 percent), but the fraud was also prevalent at the processing plants (27.3 percent) and at the import stage (17.6 percent).

If the products are frequently mislabeled, who really knows what’s in the seafood product itself? Who knows whether the fish is real or not, whether it’s laced with fillers, chemicals, and/or heavy metals? The fraud is so pervasive, Canadian retailers can’t even get the name of the fish right. Some of the fraud begins before the fish enter the country, which compounds mislabeling issues further down the line.

“We’ve been doing seafood fraud studies for a decade,” said lead author Professor Robert Hanner. “We know there are problems. But this is the first study to move beyond that and look at where the problems are happening throughout the food supply chain.” The Canadian Food Inspection Agency (CFIA) is looking for ways to counter the problems with seafood mislabeling.

The origin of the fish samples in the study was confirmed using DNA barcoding. This process, invented by the University of Guelph, attributes a short, standardized region of genetic material to each species so that the sample can be properly identified.

Hanner believes there are two motivations behind the mislabeling which often occurs during seafood repackaging. He says that the mislabeling could be “economically motivated” as distributors purposely mislabel cheap fish as expensive fish to boost revenues. He also pointed to “inconsistent labeling regulations between countries” which allows for broad common names to be used, instead of specific species names. Labeling requirements in the United States and Canada only include the common name, not the scientific name. Different species of fish of the same common name can vary in value, so a cheap form of tuna can be sold for a more premium price.

“It creates ambiguity and opens the door for fraud or honest mistakes,” he said. “It also makes it more difficult to track species at risk or indicate if a fish is a species that has higher mercury content. At the end of the day, Canadian consumers don’t really know what type of fish they are eating.”

Hanner believes that verification testing is needed at multiple points along the supply chain and that countries should use scientific names instead of common names to mitigate the fraud. Despite these efforts, how will countries be able to tell whether the seafood was chemically adulterated before import? Stunning new video showsVietnamese workers plumping up tiger shrimp with a  chemical called carboxymethyl cellulose. The thickening agent is injected into the head, tail, and midsection of the shrimp to make them appear larger, fresher, and to increase their weight. The chemically-adulterated seafood was imported to Australia from 2014 to 2015 and was worth an estimated $220 million.

Not only is labeling fraud pervasive throughout the seafood supply, but there is also several unknowns, including mercury and nitrate content and the presence of plumping chemicals in the seafood.