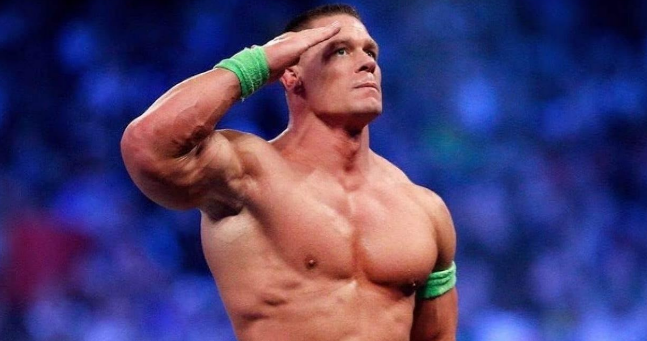 John Cena is a washed-out wrestler starring in Fast & Furious 9, and he recently apologized in Chinese (Mandarin) for referring to Taiwan as a country.

John Cena apologized in Chinese on Sina Weibo after calling Taiwan a country during an interview promoting Fast & Furious 9 pic.twitter.com/dzRKIYgEzL

The first thing to understand is that Taiwan is an outpost of the American regime, which is evil by any metrics.

And China hates Taiwan like the alien regime in Washington DC hates white Americans. Beijing hates Taiwan and the rebels in Hong Kong in the same way that the federal government in DC hates American nationalists.

Washington DC likes Taiwan and the rebels in Hong Kong in the same way that Russia was hospitable to Edward Snowden.

So, getting back to why John Cena issued an apology in Mandarin to the Chinese for calling Taiwan a proper country, this is a very interesting dynamic.

Think about what’s going on here: Cena is a Hollywood actor, and he didn’t know shit about geopolitics, that’s why he said that thing about Taiwan. One may wonder: why would Cena feel so strongly about this? Why did he apologize for an honest and innocent mistake?

Cena is not a government official or a representative of the Congress or the State Department, and his opinion doesn’t mean squat.

So, he apologized because he feels strongly about Taiwan? He did so because he cares deeply about a niche geopolitical issue such as sovereignty over Taiwan?

Obviously, John Cena was forced by his bosses to apologize for a geopolitical faux-pas he doesn’t even understand most probably.

So he was forced to apologize, and feign sincerity and repentance towards China because his bosses are beholden to a foreign country.

Beijing exerts influence over Hollywood due to the fact the Chinese market is the biggest in the world, and Cena’s bosses who are owned by foreign interests forced him to apologize to the Chinese because they are subservient to another country.

That’s a very interesting dynamic a lot of conservatives are willing to call out as long as we’re talking about China (or Russia).

When the NBA does this for example, i.e. they don’t allow you to order a custom jersey if they contain phrases that are deemed offensive by the Chinese propaganda, a lot of conservatives say this proves that the NBA is owned by the Chinese.

In the case of John Cena, so-called conservative leaders like Jack Posobiec, who incidentally is a former intelligence operative, say that he is embarrassing in his humiliating apology for a foreign country, which proves he’s owned by China.

A lot of people understand this dynamic when we’re talking about China. It’s easy to call China out, and say Chinese influence in media, or the Chinese state has bought and paid for Hollywood, or the Chinese commies have infiltrated our government etc.

But, when it comes to other countries, it’s another story.

READ  Can Anyone Figure Out What This Woman is Saying? LOL

As in, we’re supposed to believe that when Marjorie Taylor Greene says “I stand with Israel”, the reason she’s saying that is that she’s feeling strongly about the issue.

We’re supposed to believe that when Andrew Yang puts out an apology and says “I’m so sorry, I made careless remarks about the Israeli-Palestinian conflict”, when AOC walks back her statements about the Israeli Palestinian conflict, when countless people say that, or Ilhan Omar says “it’s all about the Benjamins” and gets widely condemned, we have to believe that that’s not a charade, it’s sincere.

The reason that there is a democratic majority for Israel in the US congress, when we look at every major leader of both parties going to AIPAC, when we see every sitting Republican congressman saying they stand with Israel, we are supposed to believe that that’s not the same thing we’ve seen with John Cena.

We’re supposed to believe that it’s not a foreign country disgracefully buying our (sometimes) American politicians and institutions, we’re not supposed to look at the people who are bought and paid for and say: you are a grovelling slavish lap dog for a foreign country.

We’re supposed to look at that charade and say they are all sincere in their love for Israel, and it’s not exactly the same dynamic as China calling John Cena and making him apologize.

The same goes by the way for all of Jewish power in America. Not just the Israeli state’s, but the Jewish lobby too, which is somewhat separate, but certainly is distinct. We are not supposed to talk about Jewish power, but you can say that the chicoms own Hollywood.

Can you say that the Jews own Hollywood (even if they brag about it publicly), is that acceptable in polite society?

You can definitely go on Fox News as a Republican/Conservative and say to Sean Hannity or Tucker Carlson: those damn chicoms own Hollywood and they’re influencing our entertainment industry, they bought and paid for it, it’s disgraceful, it’s not American.

And Tucker would say: that’s a great point, dude. This is really disturbing, what do you make of that?

You can go on Fox News and say that the Chinese own the media, and the media never says anything negative about China because they are owned by China.

Now, can you say Jews own the media?

The only reason you can’t say anything about Jews and media is because they run the media.

The same goes for the Israeli lobby. Why do you think it is that Breitbart publishes very aggressive articles advocating for Israeli interest?

It’s because the people doing the writing are Jewish Zionists. Why do you think the Daily Wire does the same? Who runs the Daily Wire? Ben Shapiro. What’s Ben Shapiro? A hard core Zionist Jew who says you’re anti-Semitic if you’re not a Zionist.

He actually said that, i.e. you hate Jews if you don’t support Zionism 100%. And what about Blaze TV? Who runs that? Mark Levin and Glenn Beck.

We could go down the list, but nobody will say this, for the same reason that John Cena can’t say Taiwan is a country.

The reason why John Cena can’t go out and say Taiwan is a country is the same reason why countless Americans who talk against Jewish power in the US are blacklisted/deplatformed/debanked/banned on social media/internet, or put on the no-flight list.

READ  Japan, the country with the longest Human Life Expectancy in the world, also has the least number of vaccinated people (for anything, not just covid)
912 views