The Governing Council of the ECB met last week, announcing significant, dovish changes to its monetary policy . First of all, the ECB decided to increase the envelope of the pandemic emergency purchase program (PEPP) by €500 billion to a total of €1,850 billion. It also extended the horizon for net purchases under the PEPP to at least the end of March 2022.

Second, the ECB decided to extend the reinvestment of principal payments from maturing securities purchased under the PEPP until at least the end of 2023. Third, the ECB eased the conditions of the third series of targeted longer-term refinancing operations (e.g., through extension of the period over which considerably more favorable terms will apply by twelve months, to June 2022, and through granting more subsidized loans to banks to stimulate lending). Fourth, the ECB extended the duration of the set of collateral easing measures adopted in April. Fifth, the central bank decided to offer four additional pandemic emergency longer-term refinancing operations (PELTROs) in 2021. Sixth, the Eurosystem repo facility for central banks (EUREP) and all temporary swap and repo lines with non-euro area central banks will be extended until March 2022. Seventh, net purchases under the asset purchase program (APP) will continue at a monthly pace of €20 billion, while the interest rates will remain unchanged.

Whoa, what an impressive list of “recalibrations” of the ECB monetary policy instruments! Why did the central bank implement them? Well, the reason is the second wave of the pandemic . As I pointed out in several previous reports, although the prospects of the rollout of the vaccines are encouraging, the pandemic continues to pose serious risks to the public health, negatively affecting the economy. The ECB seems to agree with me:

The resurgence in COVID-19 cases and the associated containment measures are significantly restricting euro area economic activity, which is expected to have contracted in the fourth quarter of 2020. While activity in the manufacturing sector continues to hold up well, services activity is being severely curbed by the increase in infection rates and the new restrictions on social interaction and mobility. Inflation remains very low in the context of weak demand and significant slack in labour and product markets. Overall, the incoming data and our staff projections suggest a more pronounced near-term impact of the pandemic on the economy and a more protracted weakness in inflation than previously envisaged.

So, the second wave of the epidemic dragged down economic activity, prompting the EBC to further ease its monetary policy stance . Although the ECB is officially concerned about weak GDP growth and low inflation , its main goal is to keep bond yields exceptionally low. Or as ECB President, Christine Lagarde , told a press conference : to preserve favorable financing conditions over the epidemic, to “build that bridge across the pandemic until we have reached herd immunity so that the economic recovery is well-advanced, self-sustained and inflation is back at its pre-pandemic path.”

What does the ECB’s easing of its monetary policy imply for gold? Well, so far, gold prices were little changed in the immediate aftermath of the ECB meeting on Thursday (December 10), as one can see in the chart below. 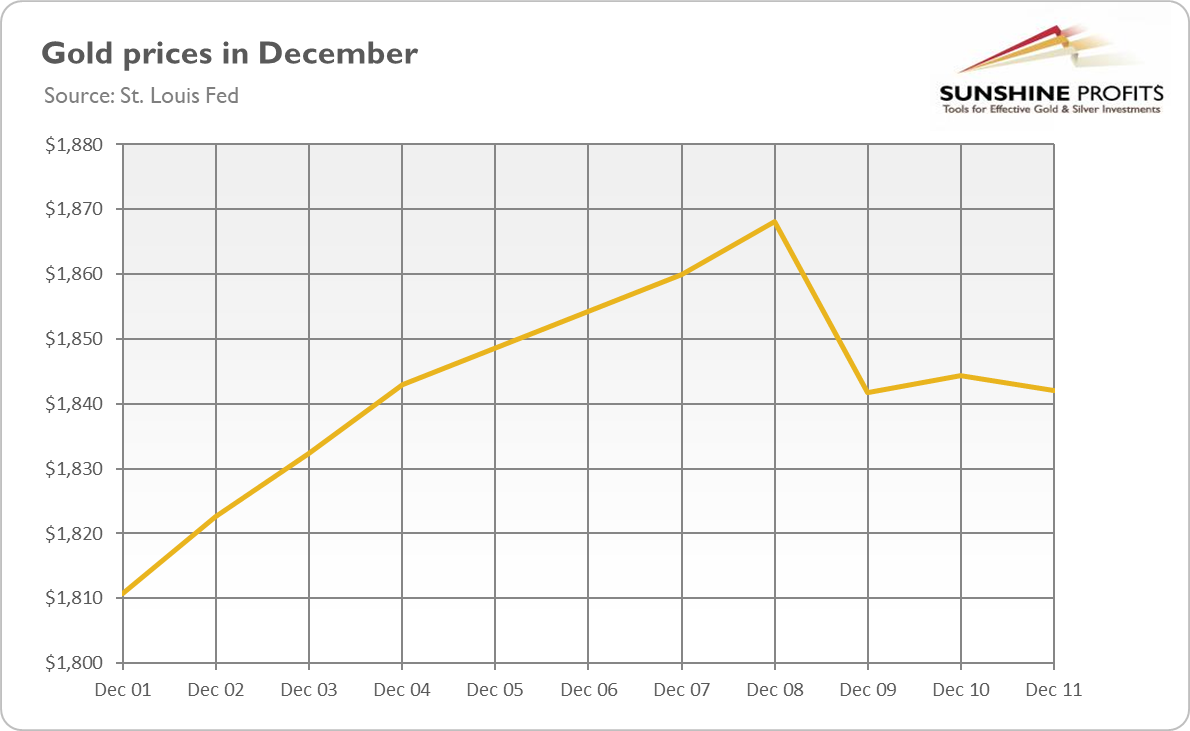 When it comes to the more distant future, the ECB’s actions will put downward pressure on the bond yields, supporting gold prices. Many yields on European Treasuries are already near their lowest levels on record. The central bank promised to keep financing costs low, de facto using the yield curve control, only without the formal target.

On the other hand, the easing of the ECB’s monetary policy and lower European interest rates should weaken the euro against the US dollar, exerting downward pressure on gold prices.

However, investors shouldn’t forget that the FOMC will announce its own decision on the stance of the American monetary policy. Given the U.S. resurgence in COVID-19 cases and a weakening economy in the fourth quarter, the Fed is likely to become even more dovish, providing the needed support for the yellow metal .