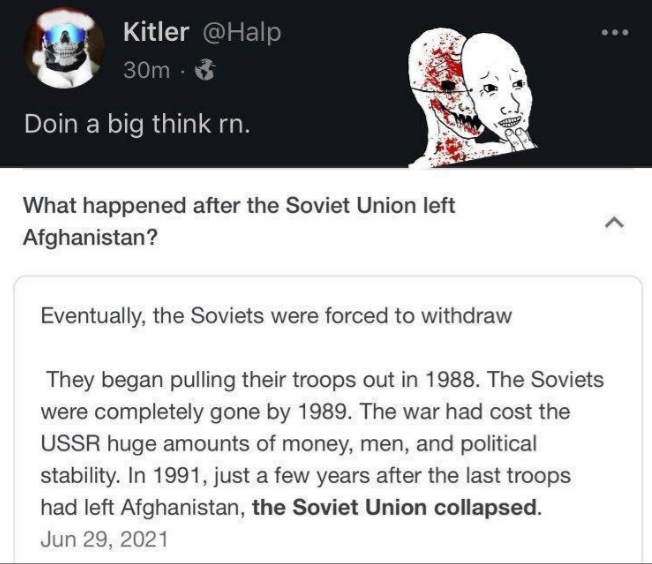 In 407 AD, Roman legions were withdrawn from Britannia to defend Rome. Despite this, Rome was sacked 410.

The United States is also a crumbling empire: Senile President, ethnic hatred towards the people who founded America, celebration of perversion, collapse of rule of law.

2001: The US invades Afghanistan. They immediately decriminalize opium production and sodomite pedophilia (punishing those who oppose it), and begin teaching Afghan women about feminism and gender studies.

None of the footage coming out of Afghanistan will be used to shame the ruling class, and nobody will even lose their jobs over it.

Instead, it will be used to shame you into accepting more waves of refugees so the same people can profit even more off the misery they engineer.

Very, very bad optics for an empire in aggressive decline:

After the Taliban swept #Kabul, residents are desperate to flee #Afghanistan. Watch the chaos at the Kabul airport. pic.twitter.com/WbxK1wzHdM

KABUL AIRPORT: Apocalyptic scenes continue to play out as Afghanistan falls into the hands of the Taliban

My source sent me this video of all the Taliban prisoners being released … this is #BidensAfghanistan Terrorists that many of our troops and Afghan troops captured free to start terror training camps again pic.twitter.com/XX4L7noBC5