For decades, the share of U.S. children living with a single parent has been rising, accompanied by a decline in marriage rates and a rise in births outside of marriage. A new Pew Research Center study of 130 countries and territories shows that the U.S. has the world’s highest rate of children living in single-parent households.

Almost a quarter of U.S. children under the age of 18 live with one parent and no other adults (23%), more than three times the share of children around the world who do so (7%). The study, which analyzed how people’s living arrangements differ by religion, also found that U.S. children from Christian and religiously unaffiliated families are about equally likely to live in this type of arrangement. 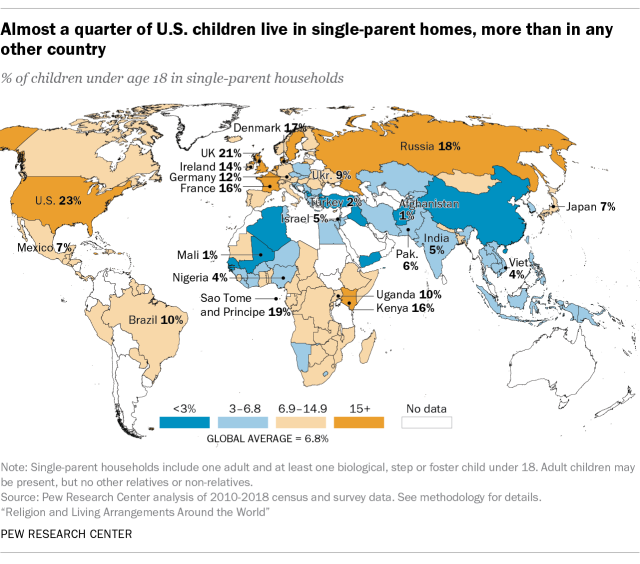 While U.S. children are more likely than children elsewhere to live in single-parent households, they’re much less likely to live in extended families. In the U.S., 8% of children live with relatives such as aunts and grandparents, compared with 38% of children globally.

Around the world, living in extended families is linked with lower levels of economic development: Financial resources stretch further and domestic chores such as childcare are more easily accomplished when shared among several adults living together.

The U.S., like other economically advanced countries, particularly in Europe and northern Asia, has relatively small households overall. The average person in the U.S. lives in a home of 3.4 people – which is less than the global average of 4.9, but slightly higher than the European average of 3.1. In the U.S., Christians (3.4), the unaffiliated (3.2) and Jews (3.0) live with roughly the same number of household members.

However, household sizes vary by age – the average U.S. child under 18 lives in a household of 4.6 members, while the average adult age 60 or older only lives with one other person.

In early adulthood, Americans continue to live with their parents at relatively high rates. Adult child households account for 20% of Americans between the ages of 18 and 34. (Adult child households are defined as at least one parent living with one son or daughter 18 or older and no minor children or other family members.) Young adults in the U.S. are similar to their Canadian counterparts in this regard, and North America has a higher share of young adults who live in this arrangement than any other region.

Americans also differ from others around in the world in their living arrangements after age 60. Older adults in the U.S. are more likely than those around the world to age alone: More than a quarter of Americans ages 60 and older live alone (27%), compared with a global average of 16%. There are only 14 countries with higher shares of older adults living alone, and all are in Europe. They include Lithuania (41%), Denmark (39%) and Hungary (37%).

The most common arrangement for older U.S. adults, however, is to live as a couple without any other children or relatives. Almost half of U.S. adults ages 60 and older live in such households (46%), compared with a global average of 31%. Conversely, older Americans are much less likely to live with a wider circle of relatives. Just 6% of older U.S. adults live in extended-family households, compared with 38% of adults ages 60 and older globally.