As oil prices continue to maintain the latest trajectory above the psychologically significant $50/barrel level, investors are increasingly recalibrating their investment prisms for beaten-down oil and gas companies.

WTI has rallied 12.8% over the past 30 days to trade at $53.02 per barrel while Brent is up 12.3% to $56.49, levels they last touched nearly a year ago thanks to a revamped OPEC-plus deal as well as an unexpected bonanza after Saudi Arabia announced plans to unilaterally cut its oil production by another 1M barrels.

For a sector that was supposed to be on its deathbed, U.S. shale might be the biggest beneficiary yet of the oil rally as higher crude prices offer a much-needed reprieve to strained balance sheets. The U.S. shale patch bears some of the highest production costs in the world, with most companies in the sector needing oil prices between $50 and $55 per barrel to break even.

That’s highly significant because it implies that another 5-10% climb in oil prices from here could mean the difference between bleeding cash and gushing profits for the shale sector.

But not all oil and gas companies need such high oil prices to break even, with a handful solidly in the green even at current prices.

Here are 3 such companies. 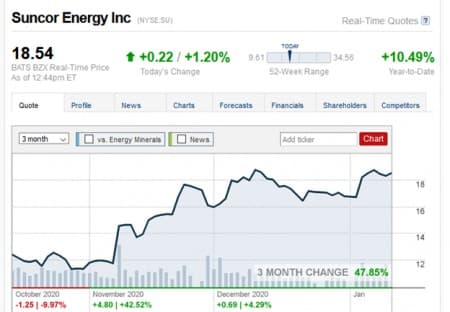 Warren Buffett spent much of 2020 offloading his energy stakes. Notably, back in May, Berkshire Hathaway (NYSE:BRK.B) sold off its final stake in Phillips 66 (NYSE:PSX) despite repeatedly touting the company’s management team as one of the best in the business, especially as far as capital management is concerned.Related: Google Looks To Turn Data Centers Into Energy Storage

However, it did not take long before Buffett went shopping again–this time picking 19.2 million shares of Suncor Energy Inc. (TSX:SU) (NYSE:SU) worth ~US$217 million. That’s a tiny stake, really, when you consider the firm’s past energy buys. Nevertheless, it might be one of its smarter ones.

At first glance, Buffett’s purchase of Suncor stock appears to have been driven by his long-term ethos to buy companies that are undervalued compared to their intrinsic values. After all, Suncor never truly recovered from the 2014 oil crisis and has been on a particularly sharp downtrend over the past two years. The Covid-19 pandemic and the oil price war only served to exacerbate the stock’s unfortunate trend.

But there could be something deeper than that.

It appears Warren Buffett is a big fan of Suncor’s assets, especially its long-lived oilfields with a lifespan of approximately 26 years. Suncor’s dependable assets have helped the company generate stable cash flows and pay out consistently high dividends. Suncor had consistently increased dividends since it began distribution in 1992 till the 2008 financial crisis. The company, however, slashed the dividend by 55% in April due to the pandemic but boasts a still respectable forward yield of 4.6%. Thankfully, the deep dividend cut really helped shore Suncor’s balance sheet, which is now among the most resilient among its peers.

In fact, Suncor revealed that it requires WTI prices to be north of $35/barrel to meet capex and dividend payouts. With WTI prices hovering in the low-50s after several Covid-19 vaccines entered the fray, Suncor appears well placed to maintain that dividend and maybe even raise it in the not-so-distant future. 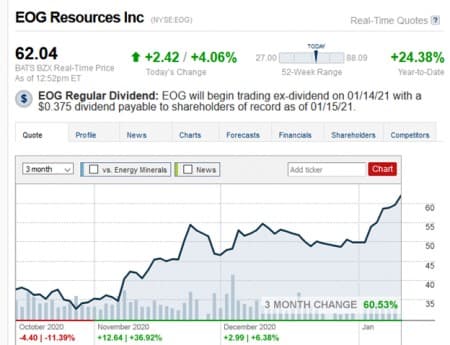 EOG Resources (NYSE:EOG) is not only the largest shale producer but also one of the largest oil producers in the United States.

EOG is also one of the lowest-cost shale producers, needing crude prices at around $36 per barrel to break even.

EOG is spread across six separate shale basins, which gives it great diversification compared to its rivals who operate in one or two basins. The multi-basin approach also allows the company to grow each asset at an optimum pace to maximize profitability and long-term value.Related: Big Oil Is An Unsung Hero In The Fight Against COVID

Also, being smaller than oil majors such as ExxonMobil (NYSE:XOM) and Chevron (NYSE:CVX) makes EOG nimbler and able to adapt to rapid changes in oil demand–a big plus during these uncertain times.

With oil prices well above the company’s breakeven level, EOG plans to use its free cash flow to pay down debt, buy back shares, and possibly even boost the dividend. 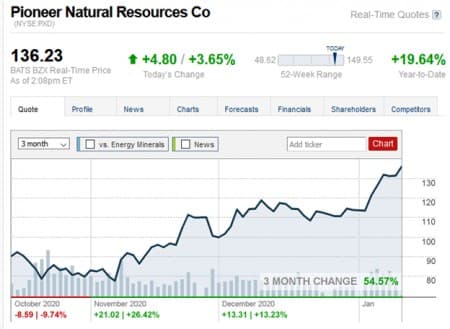 Of the leading oil and gas majors, Pioneer Natural Resources (NYSE:PXD) sets itself apart as the only top 10 producer with zero international interests. Further, Pioneer has been selling off most of its assets in the Eagle Ford to better focus on the Midland Basin side of the Permian, where it dominates.

Further, Pioneer has announced plans to acquire Parsley Energy in an all-stock transaction valued at ~$4.5 billion. Pioneer says the merger is expected to drive annual synergies to the tune of $325 million and to be accretive to cash flow, free cash flow, earnings per share, and corporate returns beginning in the first year after the merger.

Pioneer Natural Resources’ improved cost structure is capable of delivering impressive free cash flows at low oil prices, and this should keep it in good stead even as low energy prices persist.

That’s great for the company’s bottom line, because the company’s breakeven is already low, somewhere around the mid-30s. All that extra free cash flow is likely to flow into the pockets of investors via dividends if oil prices remain high as Pioneer is looking to adopt a variable dividend model. Many oil companies are turning to variable dividends that reward income investors with higher dividends during periods of higher oil prices without completely cutting them off during leaner times.