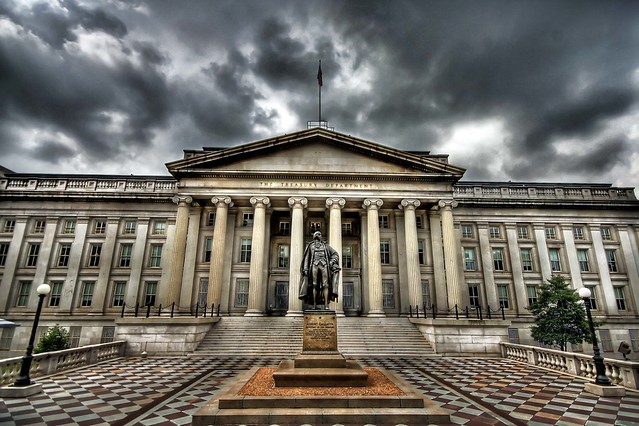 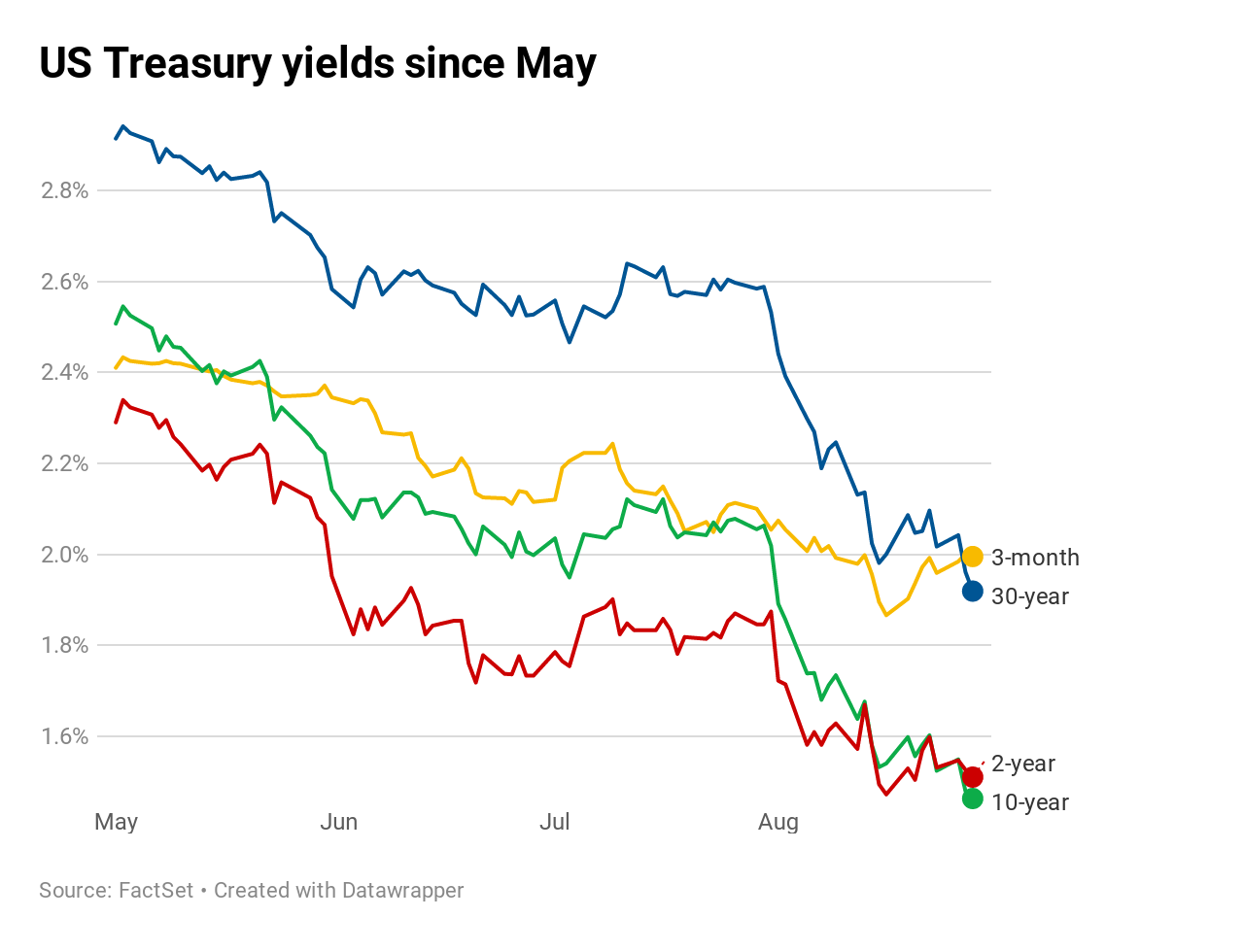 The rate on the benchmark 30-year Treasury bond sank to a new all-time low on Wednesday while the U.S. yield curve inverted even further as fixed-income traders continue to bet on tepid inflation and slower growth around the world.

The 30-year bond yield dropped to as low as 1.907% early Wednesday morning, breaking its prior all-time low of 1.916% clinched earlier in August. The 30-year rate later moved off those lows to trade at 1.916%, still below yields on U.S. debt of far shorter duration such as 3-month and 1-month bills.

The yield curve inversion, meanwhile, continued to worsen on Wednesday. The yield on the benchmark 10-year Treasury note slumped further below that of the 2-year note — at 1.454% and 1.5%, respectively — after closing inverted for the second day in a row on Tuesday. Yields fall as prices rise.

A Dollar Rising Into a Possible U.S. Recession Could Be a Bad Omen

(Bloomberg) — The dollar has been ascendant in 2019 and forecasts for a U.S. recession are growing louder. If the greenback’s strength keeps up and the economy does shrink, some experts are worried this combination will make it harder for the economy to claw back out.

A Federal Reserve Bank of New York indicator shows more than 30% odds of a downturn in the next 12 months. Exports and investments are critical parts of U.S. gross domestic product, so a dollar that climbs as rates fall — and traders expect the Fed to keep reducing them — would leave just consumers and fiscal policy to power growth.

Not only does the U.S. currency’s climb tend to erode the profits of American multinationals, but it also raises the costs of foreign corporations with trillions of dollar-denominated debt. The pressure from greenback strength on other economies could even encourage those countries to join a U.S. attempt to weaken it.

“If you start to see the U.S. economy really begin to decelerate and the dollar continue to strengthen, that would suggest a dislocation with fundamentals that is unsustainable and will get the attention of policy makers,” Bank of America senior foreign-exchange strategist Ben Randol said in a phone interview. “If the U.S. can make its concerns heard with its international counterparts, it can potentially get some support for a coordinated intervention that suppresses the strength of the dollar.”

The rich have cut their spending on everything from homes to jewelry, sparking fears of a trickle-down recession that starts at the top.

From real estate and retail stores to classic cars and art, the weakest segment of the American economy right now is the very top. While the middle class and broader consumer sections continue to spend, economists say the sudden pullback among the wealthy could cascade down to the rest of the economy and create a further drag on growth.

Luxury real estate is having its worst year since the financial crisis, with pricey markets like Manhattan seeing six straight quarters of sales declines. According to Redfin, sales of homes priced at $1.5 million or more fell 5% in the U.S. in the second quarter. Unsold mansions and penthouses are piling up across the country, especially in ritzy resort towns, with a nearly three-year supply of luxury listings in Aspen, Colorado, and the Hamptons in New York.

Retailers to the 1% are faring the worst, with famed Barney’s filing for bankruptcy and Nordstrom posting three consecutive quarterly declines in revenue. Meanwhile, Wal-Mart and Target, which cater to the everyday consumer, are reporting stronger-than-expected traffic and growth.

Warren Buffett, known for being one of the world’s most prescient investors, has kept quiet on whether U.S. equities are too expensive at a time when the global economy is slowing, Bloomberg reports. But he’s reportedly hoarding a record $122 billion in cash at Berkshire Hathaway Inc., leading to some speculation that he sees a recession on the horizon, or at least is sending some sort of warning. The cash pile is more than half the value of Berkshire’s $208 billion portfolio of public companies, and the only time that percentage has reportedly been higher since 1987 was in the years leading up to the 2008 financial crisis.

Bloomberg also points out that Buffett’s favorite gauge of the stock market, the market capitalization-to-GDP ratio, doesn’t paint a pretty picture at the moment. The barometer, which measures the total value of the stock market as a percentage of GDP, was reportedly telling before the last two economic downturns. It shot up 146 percent at the peak of the dot-com bubble in 2000, and 137 percent just before the financial crisis in 2008. It reportedly hit 154 percent in 2017 and Bloomberg reports that it’s almost certainly higher today since the U.S. stock market is up. If it wasn’t clear already, the lower the ratio, the better.

Just one more thing to keep an eye on. Read more at Bloomberg. Tim O’Donnell