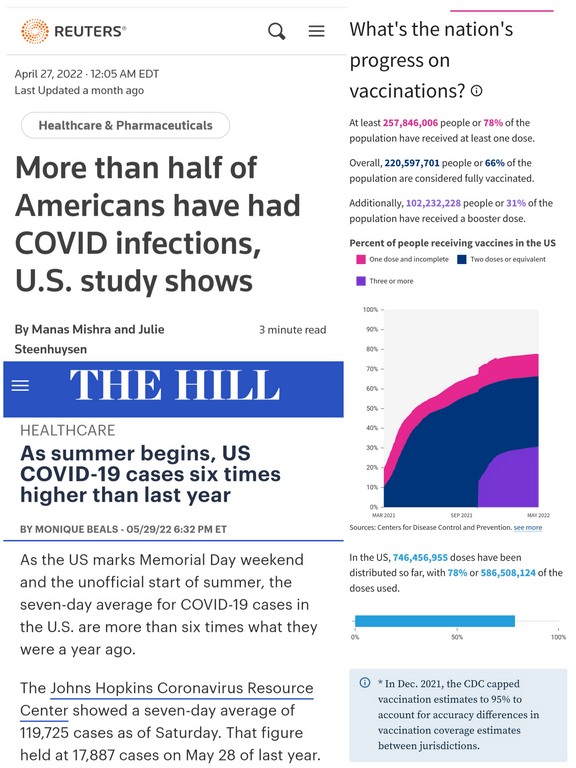 the The Hill article:

As the US marks Memorial Day weekend and the unofficial start of summer, the seven-day average for COVID-19 cases in the U.S. are more than six times what they were a year ago.

The Johns Hopkins Coronavirus Resource Center showed a seven-day average of 119,725 cases as of Saturday. That figure held at 17,887 cases on May 28 of last year.

Despite the rising infection rate, COVID-related deaths were down from last year, a sign of increased immunity through vaccines and prior infections, along with wider availability of treatments.

The seven-day average of 470 deaths reported on Friday marked a decrease from 637 on the same day last year.

In Dec. 2021, the CDC capped vaccination estimates to 95% to account for accuracy differences in vaccination coverage estimates between jurisdictions.

The percentage of Americans who have been infected with COVID-19 jumped from 34% in December 2021 to 58% in February 2022, a new study from the Centers for Disease Control and Prevention (CDC) reveals.

WebMD: Almost 60% of Americans have been infected by COVID.

Reuters: More than half of all Americans have had COVID.

April 26 (Reuters) – Following the record surge in COVID-19 cases during the Omicron-driven wave, some 58% of the U.S. population overall and more than 75% of younger children have been infected with the coronavirus since the start of the pandemic, according to a U.S. nationwide blood survey released on Tuesday.

The study issued by the U.S. Centers for Disease Control (CDC) and Prevention marks the first time in which more than half of the U.S. population has been infected with the SARS-CoV-2 virus at least once, and offers a detailed view of the impact of the Omicron surge in the United States.

So 75% of all American children have already had COVID 19. According to CDC data, there were a total of 1,240 deaths attributed/related to COVID among Americans 0-18 years old.

US Census under 18 population: