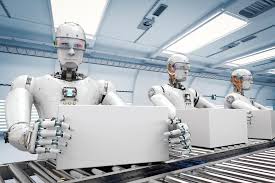 More than 4 million commercial robots will be installed in over 50,000 warehouses by 2025, according to a report by ABI Research.

The 50,000 figure represents a massive expansion of the market from the current situation in which an estimated 4,000 warehouses were found to be using robots in 2018.

ABI says the rapid rate of adoption will be driven by the need for flexible, efficient, and automated e-commerce fulfillment as same-day delivery becomes the norm.

Global adoption of warehouse robotics will also be spurred by the increasing affordability and return on investment of a growing variety of infrastructure-light robots as they are an attractive and versatile alternative to traditional fixed mechanical automation or manual operations.

Will androids write novels about electric sheep? The dream, or nightmare, of totally machine-generated prose seemed to have come one step closer with the recent announcement of an artificial intelligence that could produce, all by itself, plausible news stories or fiction. It was the brainchild of OpenAI – a nonprofit lab backed by Elon Musk and other tech entrepreneurs – which slyly alarmed the literati by announcing that the AI (called GPT2) was too dangerous for them to release into the wild, because it could be employed to create “deepfakes for text”. “Due to our concerns about malicious applications of the technology,” they said, “we are not releasing the trained model.” Are machine-learning entities going to be the new weapons of information terrorism, or will they just put humble midlist novelists out of business?

Let’s first take a step back. AI has been the next big thing for so long that it’s easy to assume “artificial intelligence” now exists. It doesn’t, if by “intelligence” we mean what we sometimes encounter in our fellow humans. GPT2 is just using methods of statistical analysis, trained on huge amounts of human-written text – 40GB of web pages, in this case, that received recommendations from Reddit readers – to predict what ought to come next. This probabilistic approach is how Google Translate works, and also the method behind Gmail’s automatic replies (“OK.” “See you then.” “That’s fine!”) It can be eerily good, but it is not as intelligent as, say, a bee.

In the most ambitious project to date, the Estonian Ministry of Justice has asked Velsberg and his team to design a “robot judge” that could adjudicate small claims disputes of less than €7,000 (about $8,000). Officials hope the system can clear a backlog of cases for judges and court clerks.

The project is in its early phases and will likely start later this year with a pilot focusing on contract disputes. In concept, the two parties will upload documents and other relevant information, and the AI will issue a decision that can be appealed to a human judge. Many details are still to be worked out. Velsberg says the system might have to be adjusted after feedback from lawyers and judges.

Estonia’s effort isn’t the first to mix AI and the law, though it may be the first to give an algorithm decision-making authority. In the US, algorithms help recommend criminal sentences in some states. The UK-based DoNotPay AI-driven chatbot overturned 160,000 parking tickets in London and New York a few years ago. A Tallinn-based law firm, Eesti Oigusbüroo, provides free legal aid through a chatbot and generates simple legal documents to send to collection agencies. It plans to expand its “Hugo-AI” legal aid service matching clients and lawyers to Warsaw and Los Angeles by the end of the year, said CEO Artur Fjodorov.

The idea of a robot judge might work in Estonia partly because its 1.3 million residents already use a national ID card and are used to an online menu of services such as e-voting and digital tax filing.

Some might say that politicians couldn’t get any worse, so here is a question from IFLScience.com:

If you had the opportunity to vote for a politician you totally trusted, who you were sure had no hidden agendas and who would truly represent the electorate’s views, you would, right?

What if that politician was a robot? Not a human with a robotic personality but a real artificially intelligent robot.

Well it urns out, more than a quarter of Europeans would rather have their countries’ important political decisions made by artificial intelligence than their elected and unelected human officials, according to a surprising new survey.

Fully one in four Europeans said they were “somewhat or totally in favor of letting an artificial intelligence make important decisions about the running of their country,” a number that climbed to one in three for the Netherlands, UK, and Germany, according to a survey by the Center for the Governance of Change, a tech-focused research group from IE University in Spain. The figures remained constant across education levels, gender, and political affiliation, indicating either Europeans are abnormally welcoming of their new robot overlords – or they’re sick of their human ones.