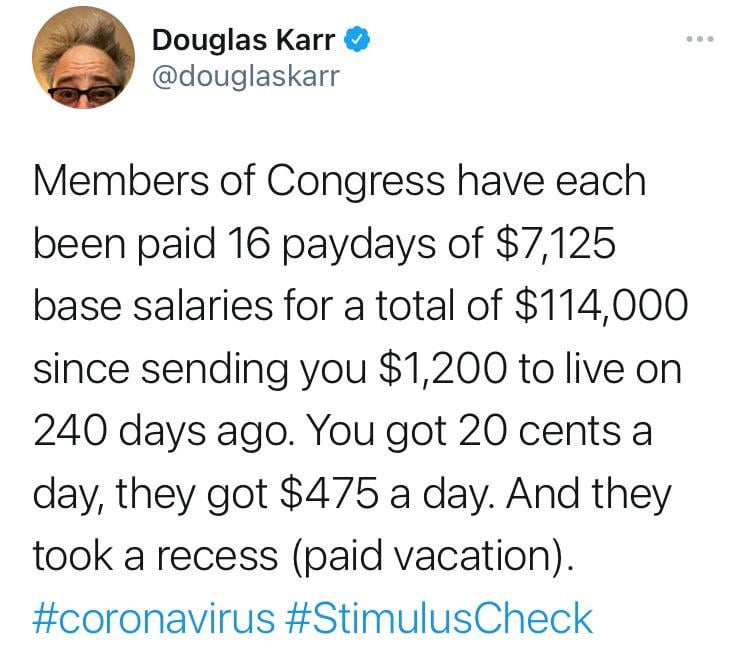 “$600 for 300 million Americans is $180 billion. The stimulus bill that’s about to pass is $900 billion total. That means 80% of this stimulus money is going to special interests and government programs while the average person gets the crumbs.”

$600 for 300 million Americans is $180 billion. The stimulus bill that’s about to pass is $900 billion total. That means 80% of this stimulus money is going to special interests and government programs while the average person gets the crumbs.

With the latest, $900 billion covid-stimulus deal now done (which unless the Democrats win the Georgia Senate runoffs in 2 weeks will be the final covid stimulus bill according to Goldman), attention turns to what’s actually in it.

First: the good news – the bill will include a fresh round of benefits for small businesses as well as the usual one-time pittance for peasants, amounting to a $600 check. Here are the key components:

$300-per-week in enhanced unemployment benefits through March. Expiring programs for gig workers and the long-term unemployed also would continue.

$284 billion for the Paycheck Protection Program that provides grants forgivable loans to small businesses, arguably the most successful and also most abused program of the CARES act. This represents the bulk of the $325 billion the bill puts toward small businesses

$82 billion for education: includes $54.3 billion for K-12 schools and $22.7 billion for colleges; governors would get $4.05 billion to spend on education aid at their discretion.

For-profit colleges would get $908 million for grants to students, and another $1.7 billion would be set aside for historically black colleges, tribal colleges, minority-serving institutions

15 billion in grants for theater operators and owners of small performance venues.

$13 billion in funds for food-stamp and child-nutrition benefits.

$30 billion for the procurement and distribution of a Covid vaccine, as well as testing and tracing.
$1.8 billion in tax credits for businesses to provide paid leave.