Authored by Philipp Bagus via The Mises Institute,

While the euro crisis seems far away as all Eurozone countries ran government deficits below 3 percent of GDP, there is one problem for the euro that quietly keeps growing: the unresolved banking crisis. And this is not a small problem.

The Eurosystems´and euro banks´ balance sheets totaled €30 trillion in January 2018, that is about 291 percent of GDP.

First, banking regulation has become tighter after the financial crisis. As a consequence regulatory and compliance costs have rise substantially. Today banks have to fulfill demands by national authorities, the European Banking Authority, the Single Supervisory Mechanism, the European Securities and Markets Authority and the national central banks. Being at a staggering 4% of total revenue currently, compliance costs are expected to rise to 10% of total revenue until 2022.

Second, there are risks hidden in banks´ balance sheets. That there is something fishy in European banks´assets can quickly be detected when comparing banks market capitalization with their book value. Most European banks have price-to-book ratios below 1. German Commerzbank´s price-to-book ratio stands at 0.49, Deutsche Bank´s is at 0.36, Italian UniCredit´s at 0.23, Greek Piraeus Bank at 0.14, and Greek Alpha Bank at 0.34.

With a price-to-book ratio below 1, buying a bank at the current prices and liquidating its assets at book value, an investor could make profits. Why are investors not doing that? Simply, because they do not believe in the book value of the banks´assets. Assets are too optimistically valued in the eyes of market participants. Considering that the equity ratio (equity divided by balance sheet total) of the Euro banking sector is at only 8.3%, a down valuation of assets could quickly evaporate equity.

Third, low interest rates have contributed to increasing asset prices. Stocks and bond prices have increased due to the monetary policy of the ECB, thereby leading to accounting profits for banks. Monetary policy has, thereby, artificially propped up banking profits during the last years.

Fourth, according to the ECB non-performing loans (NPLs), i.e. loans where borrowers have fallen behind in their payments, amount to €759 bn., that is 30% of the banks´ equity. 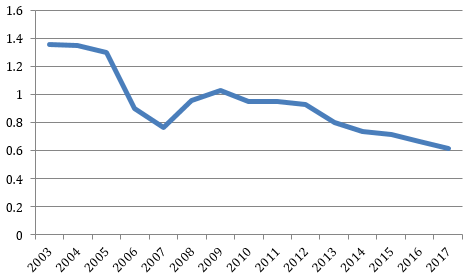 Companies that otherwise would have had to close, can survive due to interest rates close to zero. Their survival is not without cost as they suck up resources that could be used in other projects. Every year of the ECB´s zero interest rate policy 10,000s of bankruptcies are postponed adding to a growing stock of zombie companies. The zombie companies contribute to the anemic growth because they mal use resources that could be use more productively in other lines of production. Once interest rates increase rapidly these zombie companies will come to the roost and insolvency rates will return to more normal levels leading to problems for banks.

Sixth, lower interest rates have posed severe problems to banks´net interest margin. The passive, the transformation and the credit margin of banks have fallen. The passive margin results from investing deposits of bank clients in the overnight interbank market. Banks could earn traditionally a margin this way but not in a world of negative interbank rates. The transformation margin results from maturity transformation, when a bank borrows short-term from a client and lends long-term to another client. With a flattened yield curve, this transformation yields less than it normally would. Borrowing at 0% in order to lend long term at 0% is not profitable. Moreover, when banks lend long term at very low interest rates and short-term rates start to increase, margins fall further.

The credit margin results from the risk of lending. Banks try to compensate the falling passive and transformation margin by assuming higher credit risks. The competition of banks in this field drives down the credit margin as well. Thus the zero interest rate policy of the ECB has cannibalized traditional bank profitability.

Seventh, banks in the Eurozone are still connected closely to their government. As of January 2018, Eurozone banks held €3.536 bn. Government debt on their books which amounts to 13% of their balance sheet total. When in the next recession, the sovereign debt crisis looms again banks can expect losses on their sovereign debt portfolio.

When interest rates increase in the future banks will be confronted with several difficulties. First, non-performing loans will increase and zombie companies will go bust. Second, banks’ long term low interest rate loans will become more difficult to refinance profitably. Third, asset prices will fall leading to losses. Government may get into trouble.

As a result of these losses, banks will be forced to restrict credits as their equity shrinks. Ironically, the ECB´s zero interest rate policy designed to promote credit expansion will finally lead to a credit contraction. There will be a severe recession and a fall in the money supply. The crisis will not only endanger the banking system but the euro as such, because troubled Eurozone government will try to recapitalize their banks through a monetization of newly issued debts.