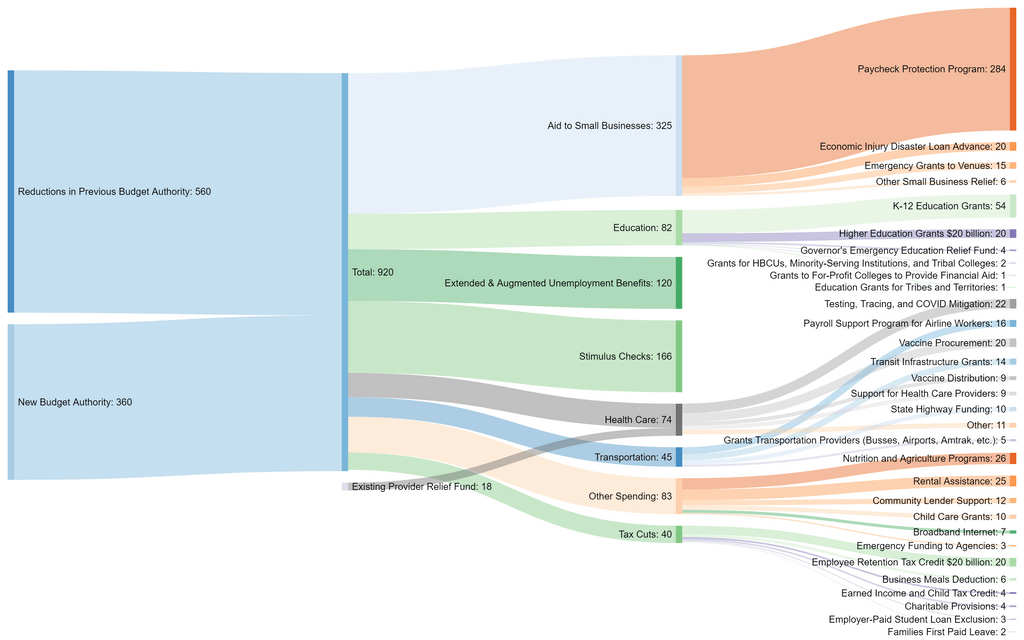 Source: The non-partian Commitee for a Responsible Budget which analyzed the full test of the Coronavirus Response and Relief Supplemental Appropriations Act, 2021 which is Division M of H.R. 133. Numbers are estimates of 10 year costs and are in billions of US dollars.

An important note and one that is causing a lot of confusion, including in other posts. H.R. 133 is titled the Consolidated Appropriations Act, 2021 which is an “omnibus”. It is essentially a bill made out of other independent bills which is passed all at once.

The bill started as an annual appropriations act. This is the spending the government passes each and every year which gives government agencies like the CDC and NASA money to carry out their programs. Because the federal government will shut down without this bill, it is considered “must pass” legislation.

After trying (and failing) to pass an independent COVID relief bill for months, Congress essentially stapled a separate relief act onto the back of this omnibus bill to make it harder to block. The bill is divided into sections. Divisions A – L are normal, full-year budgets to keep the lights on at federal agencies. Division M is the relief bill.

A lot of the spending items being cited in other posts are from the much larger annual appropriations bill that was simply used as a legislative vehicle to get COVID relief passed. Items like money for Egypt, or the border wall are separate government spending – they are not part of the $900B.