Besides that, rents are in free-fall in Chicago, decline in Seattle, plunge here, soar there, city by city.

The peculiar phenomenon that had started last November is getting more and more peculiar. The momentum of median asking rents across the US has split in two: On a national average, one-bedroom rents are soaring in the double-digits while two-bedroom rents are barely ticking up. And this was exacerbated in February: 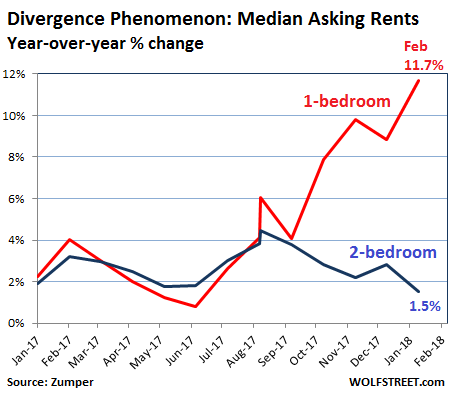 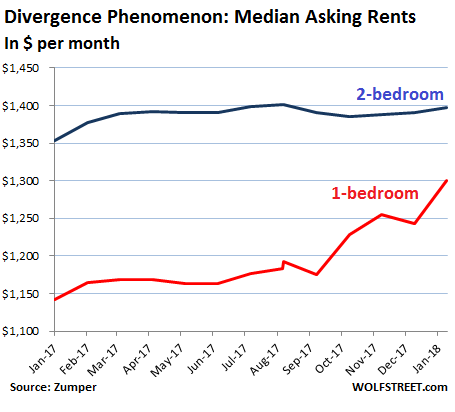 This divergence between the growth of 1-BR rents and 2-BR rents is occurring as 1-BR rents are rising faster or are declining more slowly, depending on the market, than 2-BR rents. In other words, starting in November, on average, the one-bedroom rental market has become a lot hotter or at least “less cold,” depending on the city, than the two-bedroom market, which is beginning to freeze over in many cities.
The reasons for this phenomenon remain unclear, but the guessing game has started. A top contender is simply the price level: Rents are too high, 2-BR rents have moved out of reach, and people are substituting and downsizing.

But rents are local, so to speak.

The key storyline across all three New York City was the record use of concessions. The market share of landlord concessions – inclusive of paid brokerage commissions, free rent, and other costs – was 49.3% in Manhattan, 47.5% in Brooklyn and 50.8% in the northwest region of Queens.

A special word about Chicago:

Back in September 2016, Chicago was the 8th most expensive rental market in the US. But its rents have plunged, and Chicago moved down the list (below). In recent months, it fell to 12th position. In February, it fell to 14th position with 1-BR rents and to 13th position with 2-BR rents, overtaken by Long Beach and Ft. Lauderdale. Chicago rents are in free-fall, if that can be said about a market that moves in months not minutes: 1-BR rents plunged 15% year-over-year to $1,470 and are down 28.3% from the peak in October 2015. 2-BR rents plunged 13.6% year-over-year to $1,970 and are down 25.7% from their peak in September 2015.
The data is based on asking rents in multifamily apartment buildings. Single-family houses and condos for rent are not included. Zumper gleans this data from active listings in cities across the country and aggregates it into its National Rent Report. Unlike some other types of rent reports, Zumper’s data includes asking rents from new construction.
In this table of the 14 most expensive rental markets, the shaded area indicates peak rents and the movements since then. Rents in all but two of the 14 markets were down significantly from their respective peaks. Note the number of double-digit declines. And look at the rents in formerly red-hot Seattle that is now drowning in high-end supply that the construction boom is dumping on the market: 2-BR rents are down 9.4% from their peak: 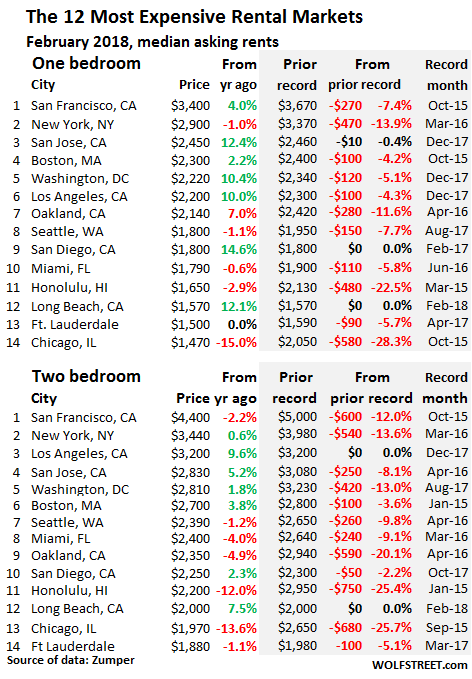 Other trouble spots among the most expensive markets.