The IMF recently issued a stark warning to the world, writing about the second great depression just around the corner. The international organization referred to a global panic that could be triggered by unregulated parts of the financial system as debt levels around the world rise above what they were before the last bubble burst more than 10 years ago.

The report read, “The extended period of ultralow interest rates in advanced economies has contributed to the build-up of financial vulnerabilities.” It later stated, “The large accumulation of public debt and the erosion of fiscal buffers in many economies following the crisis point to the urgency of rebuilding those defences to prepare for the next downturn.” The world’s economy now boasts a median government debt to GDP ratio of 52 percent, up 36 percent from pre-2008. The U.S. has been hovering around or above 100 percent since mid-2012.

The IMF also wrote that “risks tend to rise during good times, such as the current period of low interest rates and subdued volatility.” Once again, the big banks are becoming too big to fail. JPMorgan Chase, with its rapid expansion, is the greatest example of a bank requiring public money to keep them from failing and triggering another global financial crisis.

The report concluded, “Large challenges loom for the global economy to prevent a second Great Depression.”

Let’s dig into the real economic situation in America today and how the many bubbles throughout our economy could spark the next crisis.

Looking at the U.S. economy for a minute, things are not as they seem. The real unemployment rate is much higher than the 3.7 percent (U-3) that is being reported by the Trump administration and the mainstream media. Economists and others watching the jobs numbers closely continue to claim that we are at or near full employment, but this is simply not the case. 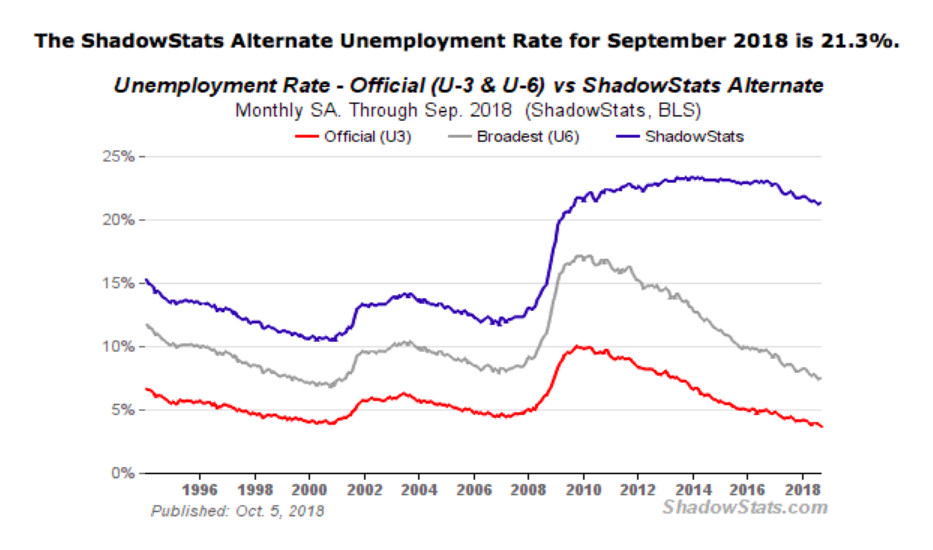 Last week, I wrote about the frightening level of student loan debt in America.

To recap, approximately 45 million Americans now owe more than $1.5 trillion in student loans. Outstanding student loan debt now exceeds auto loan debt and credit card debt, which are both below $1.1 trillion or less. Americans have become far too comfortable taking on high levels of debt despite the hard lessons learned just a decade ago.

The commercial real estate bubble is showing more signs that it is getting ready to pop. Commercial real estate loans at U.S. banks just reached an all-time record high of $4.3 trillion. This number is 11 percent higher than it was prior to the Financial Crisis, which saw a flurry of overvalued real estate assets and ridiculous levels of debt. It is worth noting that banks are on the hook for these loans should the owner default, making the bank wholly reliant on the value of the property, many of which are already valued at unrealistically high levels.

Commercial real estate prices collapsed roughly 40 percent during the Financial Crisis, according to Green Street’s Commercial Property Price Index (CPPI). But the recovery came swift as the index rapidly more than doubled from the low set in May 2009, peaking last September when the index was 27 percent above the pre-recession peak. Since September 2017, the CPPI has dropped 1.7 percent and is also down 2.1 percent from March 2017. 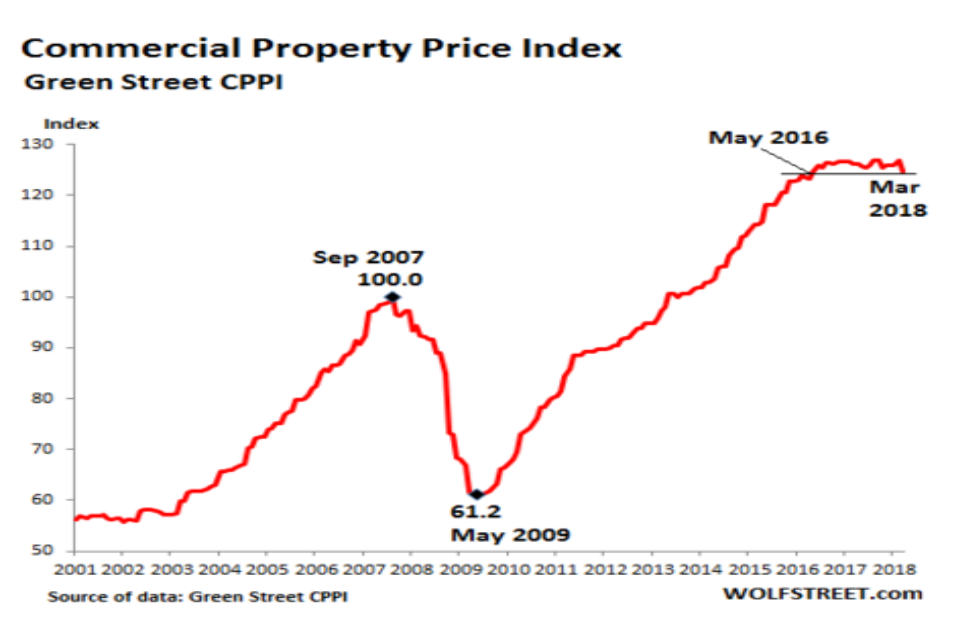 All good things must come to an end. The stock market cannot maintain its current pace for much longer and we have already seen some highly overvalued stocks in the tech sector start to drop in recent weeks.

According to a forecast from Hayes Martin, president of Market Extremes, the U.S. stock market is headed for an 8 to 13 percent decline. This forecasted correction would translate to a drop between 23,448 and 24,796 on the Dow Jones Industrial Average.

Although the total amount of auto loans outstanding in the U.S. are less than student loans, many more of these loans are seriously delinquent when compared to other forms of household debt. Americans love their cars no matter how much they cost!

Finder.com recently analyzed the New York Federal Reserve’s most recent Household Debt and Credit Report and found that in the past five years, seriously delinquent auto loan debt (90+ days) increased at a faster pace than any other type of debt.

The percentage of seriously delinquent auto loans has increased 77.7 percent in the last five years, translating to a total of $22.6 billion. Finder.com put this in perspective by comparing it to other types of delinquent debt over the same time frame: 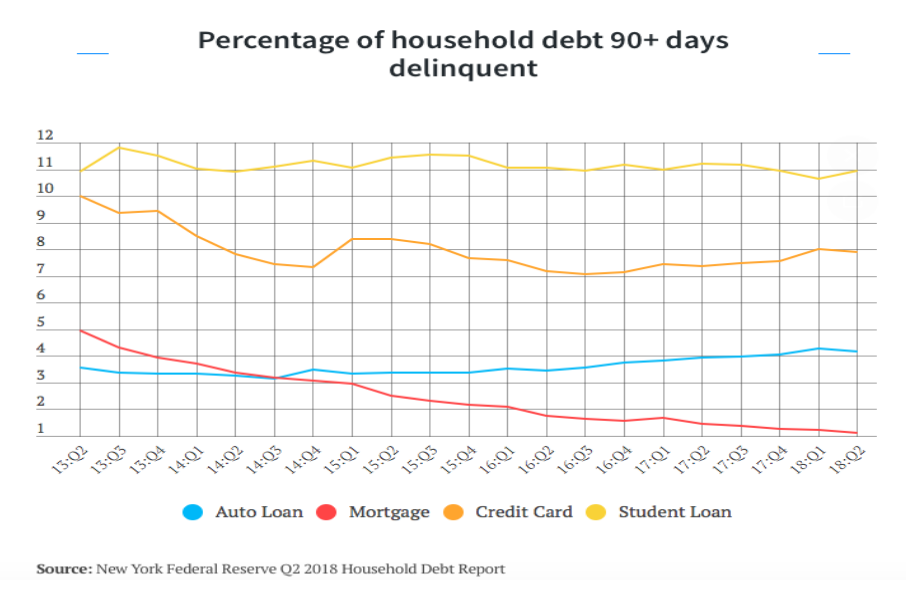 UBS estimates a record $4.3 trillion in lower-quality corporate loans and high-yield bonds, up from $2.4 trillion four years ago. Once we start to see rising defaults in this bubble, get ready for the crash to come hard.

“I view this as the most severe threat to the economy and financial system,” said Mark Zandi, chief economist of Moody’s Analytics.

This collection of debt is largely held by a number of private equity firms, hedge funds, insurance companies, mutual funds, and other financial companies, as opposed to big banks.

If you don’t own a home already, it’s getting harder to buy one with each passing month and every new interest rate hike. Rents are rising much faster than wage growth and home prices are spiraling out of control as lack of new construction and a debt-ridden pool of potential buyers unable to buy their first home or upgrade to a larger one have been another drag on the economy.

See also  Waitress abducted, beaten, & left on side of highway after confronting dine-and-dashers

There was a small window to buy a home on the cheap from 2009 to 2011 but that window has been closed for quite some time now. How can Americans be expected to save enough to buy a home when 40 percent of the population cannot even afford a $400 emergency expense? The rent is too damn high, as they say. 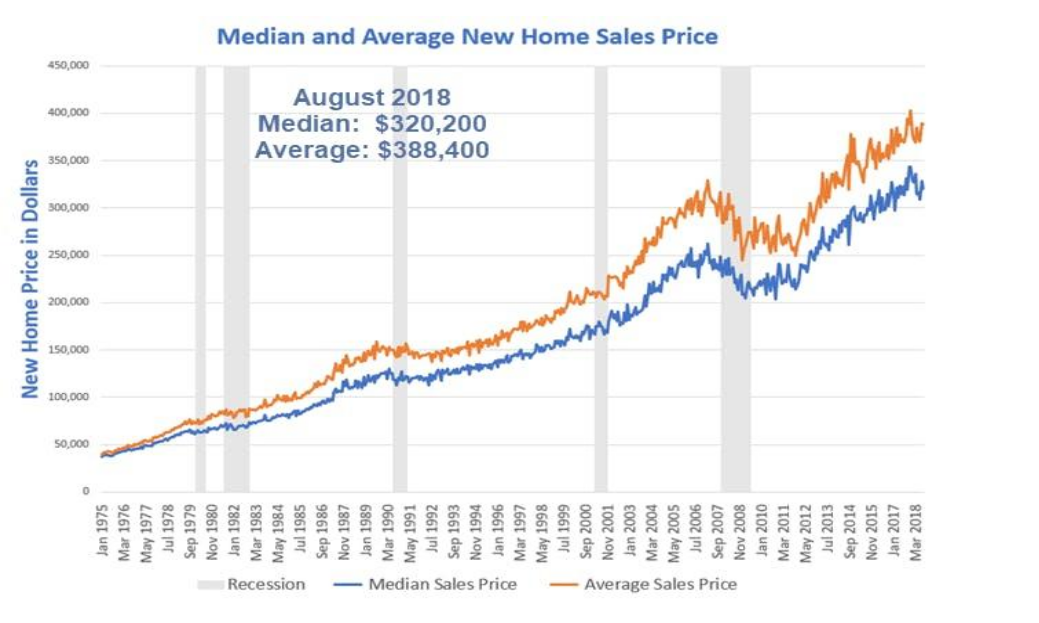 The latest BLS job numbers were touted by President Trump, but a trend of declining job growth is already becoming glaringly obvious. Other never talked about stats in the BLS numbers are worth mentioning.

The labor force participation rate in September remained stubbornly at 62.7 percent while the employment to population ratio of 60.4 percent was essentially unchanged.

The number of involuntary part-time workers increased by 263,000 in September to 4.6 million total. These individuals, previously touched upon, are people who want a full-time job but work part-time because their hours were reduced or they were unable to find full-time work.

There were 1.6 million people marginally attached to the labor force in September, about the same from a year ago. These are individuals not in the labor force, wanted and were available for work, or had looked for a job sometime in the last year. But to make the employment numbers look better, these Americans were not counted as unemployed because they had not actively looked for work in the month before the survey was taken. Among these marginally attached, there were 383,000 discouraged workers, also unchanged from a year earlier. Discouraged workers are people not currently looking for work because they believe there are no jobs available for them, despite the fact that there are more job openings out there than workers to fill them.

Total nonfarm jobs rose by only 134,000 in September, well below what many economists projected and far less than the 201,000 average monthly gain over the last 12 months. Job gains were seen in the Professional and Business Services, Healthcare, and Transportation and Warehousing sectors.

The writing is already on the wall. The crash is coming. The bubble(s) will pop before you know it. Make sure you are prepared. Make sure you have everything you need. Save now while you can. Get out of the stock market while you can. There are too many ticking time bombs out there for this “run” to last much longer.