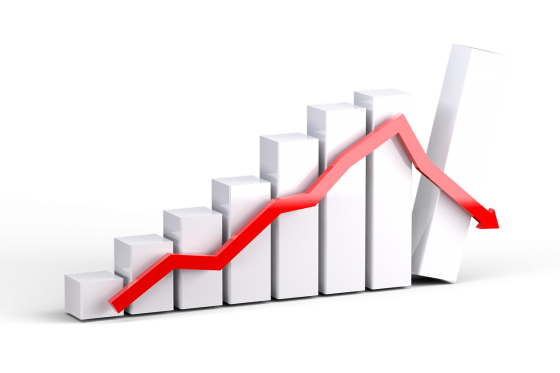 Many of us have been waiting to see what surprises the month of September would bring, and it appears that a stock market crash may be one of them.  Even the most ardent market optimists were admitting that the absurd bubble that had developed over the course of the summer was completely unsustainable, and the only real debate was over when it would finally burst.  So is this it?  Stock prices have certainly plunged quite dramatically over the last several trading sessions, but it is always possible that things could stabilize for a little while.  But whether it happens in September, October, November, December or next year, the truth is that everyone knows that a crash is coming.

On Tuesday, the Dow Jones Industrial Average fell another 632 points, but that wasn’t the real story.  Far more noteworthy was the fact that the Nasdaq was down another 4.1 percent, and that means that it has now dropped a total of more than 10 percent since it hit a brand new record high last week.

Only two times since 2001 has the Nasdaq fallen more rapidly over three trading sessions.  The index is now officially in correction territory, and the losses have been staggering.  In particular, the six largest tech stocks have collectively lost more than a trillion dollars in value during this three day stretch…

The six biggest tech stocks have lost more than $1 trillion over the last three days alone, but it’s really just a dent coming off a huge rally that peaked last week.

Apple, which hit a $2 trillion market cap on Aug. 19, is down about $325 billion in that time period. Microsoft’s down $219 billion, Amazon fell $191 billion, Alphabet cratered by $135 billion, and Tesla, which fell 21% on Tuesday to mark its worst single-day loss in its history, is down $109 billion in the last three days. Finally, Facebook is off by $89 billion.

A trillion dollars is a serious amount of money.

If you had started spending a million dollars every single day when Jesus was born, you still wouldn’t have spent a trillion dollars by now.  So we are talking about a giant pile of money that is almost unimaginable.

Apple has the largest market cap of any of the tech giants, and over the past three trading days it is down a total of more than 14 percent.  That is the worst three day stretch for Apple since October 2008.

But if you want to see a real disaster, just look at what has been happening to Tesla’s stock price.  Do you remember a few days ago when I said that it would still be overvalued if it went down 90 percent?  Well, after Tuesday we only have 69 percent more to go before that actually happens…

Tesla shares closed down 21.06%, making it the worst one-day loss on record. Tuesday’s drop brought the company’s market valuation to $307.7 billion. The stock has been on a tear this year, having risen around 300%, and the company is now worth more than some of the world’s largest automakers, including Toyota and Volkswagen.

It was widely assumed that Tesla would be added to the S&P 500 on Friday, and when that didn’t happen it was “a big disappointment for investors”…

But while S&P Indexes announced late Friday that it was adding Etsy, an online marketplace for crafters; Teradyne (TER), a company specializing in industrial automation and robotics; and Catalent (CTLT), which develops pharmaceuticals, to the index, the absence of Tesla was a big disappointment for investors, prompting the sell-off.

But the bigger disappointment for Tesla investors will come when the general public finally realizes that a company that sold less than 100,000 vehicles and actually lost 862 million dollars last year is simply not worth 307 billion dollars.

I understand that people like to make money flipping Tesla stock, but to me the entire company is a giant mirage that will eventually collapse in spectacular fashion.

As for the market as a whole, I am not too excited about this current downturn just yet.  When CNBC asked Kristina Hooper about what we are seeing, she simply labeled it “a healthy period of consolidation after a dramatic run-up”…

“Some are suggesting this is the start of another dramatic sell-off, similar to the spring of 2000 when the ‘tech bubble’ burst. I highly doubt that,” Kristina Hooper, Invesco Chief Global Market Strategist, said in an email to CNBC. “I think of this rout not so much as a correction, but as a digestion given that the NASDAQ Composite rose more than 60% from its March bottom in the course of less than six months. All In all, I think this is a healthy period of consolidation after a dramatic run-up.”

Yes, it is still entirely possible that this could turn into the big crash that everyone has been waiting for.

But I think that I will wait until the Dow falls below 25,000 before I start hyperventilating.

Of course I am among those that are entirely convinced that a stock market crash is definitely coming at some point.  At this moment in history, stock prices are absurdly overvalued.  Back in 1990, the total value of all U.S. stocks was sitting at a level that was approximately 60 percent of U.S. GDP, and these days that number has been hovering around 200 percent…

In his 2007 memoir, former Federal Reserve chair Alan Greenspan wrote, referring to late 1996, that “America was turning into a shareholders’ nation”. He noted that the total value of US stock holdings had risen from 60 per cent of gross domestic product in 1990 to 120 per cent of GDP by 1996 — “a ratio topped only by Japan at the height of its 1980s bubble”.

In Japan, that ratio had jumped to 140 per cent by the end of 1989, according to the World Bank. The ratio of market capitalisation-to-GDP in the US in 2000, to the amazement of Mr Greenspan, would go on to reach that same level. Today, the market capitalisation-to-GDP ratio in the US is just shy of 200 per cent. The S&P 500 companies alone are worth about $30tn, or 150 per cent of GDP.

So that would seem to imply that stock prices could ultimately fall by more than two-thirds, although I believe in the long-term they will go a whole lot lower than that.

In the short-term, we will see what happens.  10 of the 20 worst single day percentage declines in stock market history have happened during the months of September and October, and it wouldn’t surprise me at all to see some huge waves of volatility during the weeks ahead.

But it is probably going to take some sort of a “trigger event” for the really big crash to happen.

That “trigger event” could happen tomorrow, or it may not happen for quite some time.  But without a doubt the market is perfectly primed for a major disaster, and it certainly won’t take too much to push it over the edge.