Americans control almost 30% of the entire world’s wealth. Other countries aren’t that far behind anymore, and when measured collectively, Asia already boasts a higher total. That’s according to a new global wealth report from Credit Suisse. 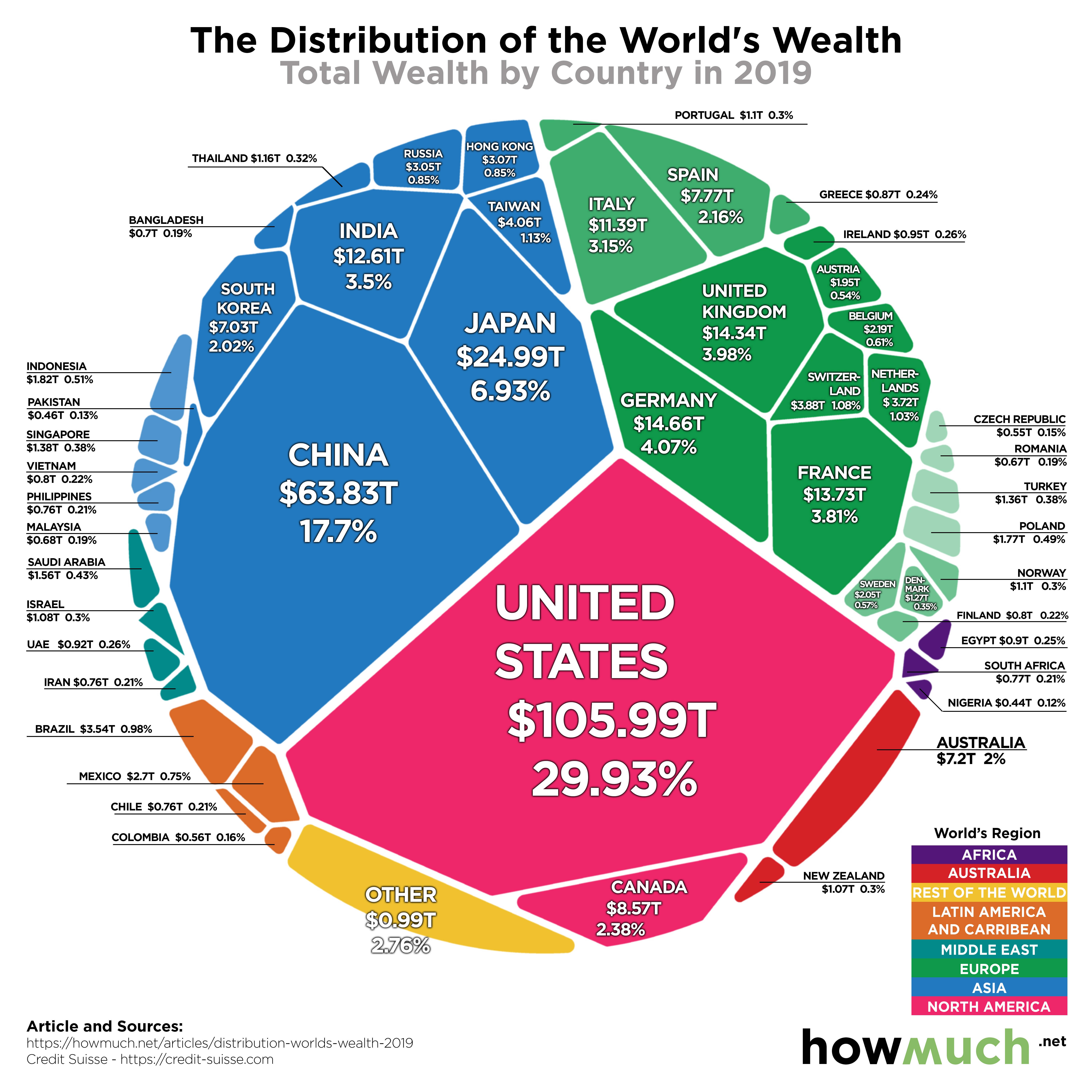 The researchers at Credit Suisse define wealth, or “net worth,” as the sum total of all financial assets minus any debts. One can argue with the methodology, especially as it relates to the value of intangible assets geography or cultural sites. But this is similar to a balance sheet that a household or business might create, except it’s for an entire country. We grouped each one by continent, letting you quickly compare the total net worth of different countries around the world.

Top 10 Countries with the Most Wealth in the World

The most obvious takeaway from our analysis is how the U.S. still controls by far more wealth than any other country. Americans simply have a significantly higher net worth than anybody else in the world. Much of this can be explained by the astonishing growth in fortunes of the richest people. For example, the world’s 500 wealthiest people saw their fortunes grow by an incredible $1.2T last year alone, bringing their net worth to $5.9T. To put that in perspective, that’s more than the total for all of Africa ($4.11T).

Other countries are seeing similar patterns of growing inequality, which further helps explain our visual. The wealth of the richest 10% in China surpassed the U.S. last year. In fact, taken as a whole, Asian countries boast a collective net worth substantially higher than the U.S. ($141.21T). Perhaps the Chinese will start supporting higher taxes on the wealthy like they have in the U.S.

Our visualization also illustrates how the U.S., Europe and Asia now control similar amounts of wealth. That’s part of the reason why observers are tracking all the intricacies of the trade war so closely. One of the reasons the world has so much wealth today is thanks to globalization. It’s helpful to remember that if the world’s major economies grow further apart in the future (see: Brexit), the economic consequences can be very high indeed.

Do you keep track of your own personal net worth? If you run a business, having a clear idea of your financial picture is critical for getting credit. Check out our small business loan guide to learn more about what else is required.