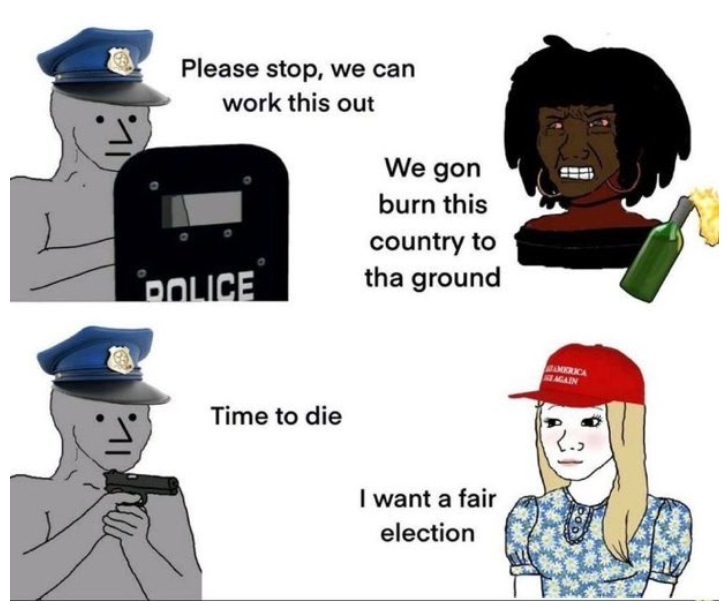 This is going to be used as the excuse by the Biden Administration for cracking down on all of us. It will go down in history as “an attempted coup.” It was a completely manufactured event.

After President Trump delivered a speech in DC to a huge MAGA crowd, he told his people to march to the Capitol. The DC police wanted people to break in, i.e. they only put a dozen of regular cops in front of the capitol, with a stupid aluminum barrier; moreover, Washington, D.C. Mayor Muriel Bowser told federal law enforcement to stand down.

As expected, people broke in, and mass media is now calling Trump supporters insurrectionists and terrorists. Trump’s Twitter account was suspended/locked or whatever, for inciting violence, and the entire legacy media, including Faux News is denouncing Trump supporters as being violent.

Basically, this is Charlottesville 2.0, and an entire narrative was created to push innocent people to deliver a spectacular event, so they can call Trump supporters violent, so the new administration can then crack down on MAGA people.

Just like Charlottesville, they wanted someone to get killed, but unfortunately for them, it was a cop who shot dead an ex-military female Trump supporter. Bad optics, and media is saying nothing about that.

There are going to be mass arrests of people who filmed themselves inside the Capitol. Head to Mexico now.

And Trump created this situation. I don’t know what he thought was going to happen. But wow. Total mess.

Today it became known that blatant and brazen cheating in a presidential election is not only OK, it will be sanctioned at the highest level.

If you believe the Senate Republicans have any problem with the Democrats taking over you are living in fantasy land, Rand Paul and Ted Cruz included.  All of this is just a pretext to “restore bipartisan cooperation” after the Bad Orange Man is gone.

The Constitution is officially shredded. Nothing written in the document is applicable.

Any honorable representative should resign immediately. Trump should then order a MOAB strike on the Capitol and reduce it to a smoking crater. There are probably plenty of patriots in the military that would fulfill that mission.

Washington DC believes we represent them, not that they represent us. The city is a foreign land, an enemy territory. It should be cut off. Any representative that does not resign should never be allowed to leave DC again. If they return home and set foot on what was American soil, they should be hung for treason.

Sooner rather than later, there will be nothing left of private America as you know it. Unless your business is traded on an exchange, it will be eliminated. Only Wall Street will be allowed to survive. Everything that made life worth living will be destroyed.

The Great Reset is here.

The rush on the Capitol coincided with the release of Pence’s letter proclaiming that he wouldn’t challenge Biden’s electors.

It was in that moment that the people knew the last hope for a constitutional resolution of the massive fraud wasn’t going to happen.

There was no longer a nation to defend. The Republic was officially over and a new revolution is necessary.

You may ask why cops defending the establishment are standing up for traitors.

Because these cops are traitors. These are Call of Duty playing cucks who want to play the game in real life.

Men with no conscience, who would blow the head off a child without thinking twice.

There wasn’t a single looter shot dead by police during the BLM riots, as they were told to stand down as BLM and antifa did billions of dollars in damages.

There has been no violence against the police last night.

THERE HAS BEEN VIOLENCE AGAINST THE PROTESTORS.

These thugs are not police. They are not Americans. They are enemy combatants protecting an illegitimate government.