The forced flight from unaffordable and dysfunctional urban regions is as yet a trickle, but watch what happens when a recession causes widespread layoffs in high-wage sectors.

For hundreds of years, rural poverty has driven people to urban areas: cities offer paying work and abundant opportunities to get ahead, and these financial incentives have transformed the human populace from largely rural to largely urban in the developed world.

Now a new set of financial pressures are forcing a migration of urban residents out of cities which are increasingly unaffordable and dysfunctional.As highly paid skilled workers and global capital have flooded into high-job-growth regions, living costs and the costs of doing business have skyrocketed: where not too long ago $1,000 a month would secure a modest one-bedroom apartment in major urban job centers, now it takes $2,000 or $3,000 a month to rent a modest flat.

Wages for the average worker have not doubled or tripled, and this asymmetry between soaring living costs and stagnant incomes is driving the exodus out of cities that are only affordable to the top 10% of wage earners, or those who bought a house decades ago and have locked in low property taxes.

Gordon Long and I discuss this forced migration in a new video program. It’s important to note that we’re not talking about economy-wide inflation or the general rise in the cost of living; we’re talking about the hyper-drive cost increases that characterize high-cost urban areas.

See also  The tide is turning in America ~ Slowly but surely.

Consider this chart of rents in the San Francisco Bay Area: unless the household’s income has shot up in parallel with rents, this cost of living is simply unaffordable. 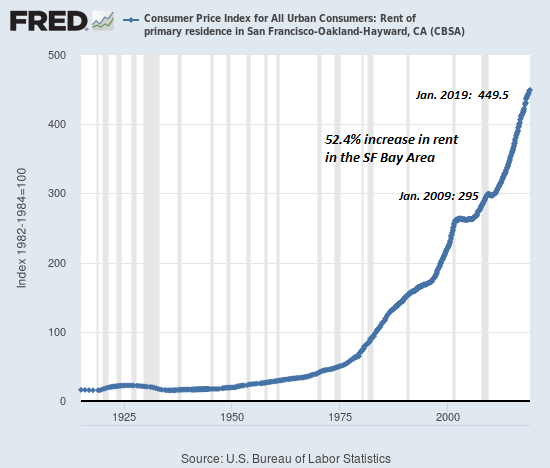 Here are the dynamics driving this financially forced flight, which hits the young especially hard: who can afford to buy a house when cramped, decaying 100-year old bungalows are $900,000 and property taxes are $15,000 or more? Who can afford to have kids when childcare costs a small fortune?

The elderly retired who don’t own a house free and clear are also being priced out of these regions.

1. Household income is stagnating as real-world inflation erodes the purchasing power of income: rent, housing, childcare, healthcare, dining out are all rising far faster than “official” inflation of 2% annually.

2. Prices in high-cost urban zones are increasing faster than in less pricey regions. Areas with job growth are experiencing supply-demand imbalances in rent and housing. Only top earners can afford to buy a home.

3. Young households are burdened with student loan debt, making it financially difficult to buy a home in a pricey urban zone and start a family. The only way to afford a home and children is to move to a region with affordable housing and living costs.

4. Income in high-cost urban areas is more heavily skewed by “winner take most” dynamics of finance and technology; the Pareto Distribution of 20% earn 80% of the income is extended so the top 4% take 64% the income. Even above-average incomes are not enough to support a traditional middle-class lifestyle.

See also  Professor warns America ALREADY in recession that could be as bad as ’08… ICAHN: Market will certainly ‘hit wall’…

5. Local government services cost more in high-cost urban areas, and so cities and municipalities are relentlessly increasing taxes, fees and licensing, pressuring all but the top tier of households.

6. The sacrifices required to live in high-cost urban areas are no longer worth it: traffic congestion, long commutes, high-stress jobs, homelessness and decaying infrastructure are outweighing the benefits of hipster urbanism.

Although it’s verboten to mention this in the we’re so fabulous local media, many of these high-cost urban regions are hopelessly dysfunctional. Taxpayers have ponied up billions of dollars in new taxes, fees and bond measures, and yet none of the problems that make daily life miserable ever get better.

At some point, the urban hipsterism that seemed so cool and appealing becomes just another example of the Haves and Have-Nots: how many households can afford $200+ for a meal and drinks at the latest foodie-fusion bistro? What level of sainthood is required to tolerate the traffic or crowded public transport to get to the hipster paradise, including avoiding the bodies, needles and other detritus of the entrenched homeless on the sidewalks?

The forced flight from unaffordable and dysfunctional urban regions is as yet a trickle, but watch what happens when a recession causes widespread layoffs in high-wage sectors and suddenly the hipster bistro that was always jammed is empty, and then shuttered. To replaced the taxes lost to layoffs and closed businesses, the political class will have no choice but to launch a frenzy of higher taxes, fees and surcharges on those left behind.