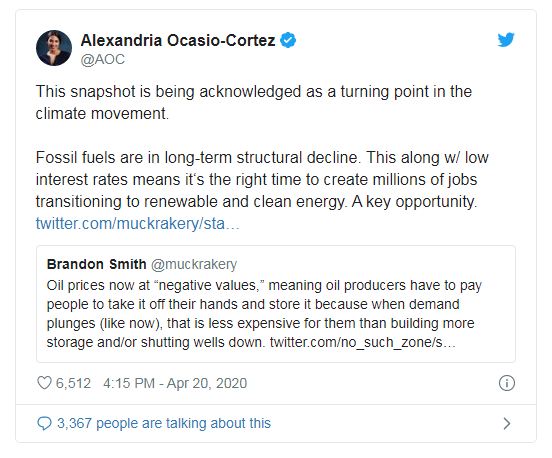 Our favorite entertainer in Congress, Alexandria Ocasio-Cortez (AOC; D-NY), on Monday deleted a message after she was criticized in which she cheered her New Green Deal in the light of the historic drop in oil prices as an opportunity to invest in “green infrastructure to save our planet.” She thinks this will create new jobs without taking into consideration all the jobs that will be destroyed no less all the collapse in property from gas stations closing and airlines collapsing.

She also never considered that we have food shortages already starting to appear because the lockdown has not merely prevented migrant workers from picking crops, but all the food which has begun to rot because shipping was also stopped by the lockdown. The collapse in oil prices will also result in greater tensions in the Middle East and the rise of civil unrest on a global scale.

Even in Germany, the destruction of the political-financial system is critical. The losses to municipalities have forced Germany to reopen. Berlin, Hamburg, and Bremen have been pushed to the bring of absolute collapse as tax revenue collapses.

We have just begun to see the damage unleashed on the world and as the numbers begin to emerge in May, the economic devastation will start to appear more shocking by the day.

While Facebook is conspiring against the civil rights of the people, if they have acted on the request of anyone in government, they are liable for a Civil Rights action for damages in the billions. Protests are appearing as Socrates projected after week 4 and this will become more violent after week 6 by mid-May. The uprising is emerging across the country and governors are going to be in serious trouble come November. If they keep this up, they better beef-up their personal bodyguards for by mid-May, this is going to get ugly.

The more entities like Google, Facebook, and Microsoft try to suppress protests, the greater the frustration and higher the probability of serious violence erupting.