On December 17, President Trump filed an appeal requesting that a district-level lawsuit from the Maryland and D.C. attorneys general accusing him of illegally taking foreign government cash through his Washington hotel be frozen due to the government shutdown.  His request was granted by the 4th Circuit Court of Appeals, stating the following: “The briefing schedule is suspended pending further order of the court.”

The DOJ’s request in the emoluments case was not the only delay request the government filed due to the shutdown. Cases involving immigration-related lawsuits are also frozen. I know that is good news for the Trump Administration.

One case some of you might be familiar with is Dr. Jerome Corsi’s lawsuit against special counsel Robert Mueller’s probe. I want to discuss this case, as it is extremely interesting to me – complex but interesting.

Dr. Jerome Corsi says his family is allegedly being harassed by the FBI and and the Mueller probe.  I do not doubt that, as what we have seen Special Counsel Robert Mueller get away with is staggering.  We have to accept that there are two sets of rules – ‘theirs and ours.’

.@jerome_corsi on the FBI allegedly surveilling his family: “I’ve got evidence that the FBI and Mueller’s team are now harassing my family. They’re doing door knocks on my stepson, they’re parking surveillance vans with two agents… Harassing my family is beyond bounds." pic.twitter.com/7GBF1oN446

Dr. Corsi is suing the Mueller probe, and this is the interesting part – get this!

Special counsel Robert Mueller HAS ASKED to delay Dr.Jerome Corsi’s lawsuit, citing the government shutdown.  Now let me ask you this, WHY, OH WHY, would Mueller ask to delay this lawsuit?

Federal agencies and special counsel Robert Mueller wants a U.S. district judge to delay an upcoming hearing in a lawsuit brought by Dr.Jerome Corsi!!! Are you kidding me? In taking this action, Mueller is lending credence to Dr. Corsi’s accusations against him.

A lawyer for Corsi says that the request for a delay was being “proffered tactically,” and asserted “it is highly doubtful” that DOJ attorneys “are actually prohibited from working.”

I am afraid that Corsi’s attorney may be wrong, as we are seeing other lawsuits being delayed due to the government shutdown.

What are the particulars of the Corsi/Mueller lawsuit?  What is really going on? Well, of course, it does not take a rocket scientist to agree that Dr. Corsi is being truthful when he says, his ‘family is being harassed by the Mueller probe.’ Again, I say, ‘allegedly.”

Of course, they are doing everything they can into pushing Corsi to accept a plea deal he has already turned down.  Yes, Corsi turned down a plea deal! What does that tell you while Mueller has easily had others taking them? They have dropped like flies unfortunately.

When I read several articles on the Corsi predicament, I felt like I was running around in a maze.  I will try to explain somewhat, but I must warn you – it will be difficult. I will list links which you may read yourself.

First of all, Dr. Jerome Corsi turned down a deal offered by Special Counsel Robert Mueller.  He was offered a deal if he would plead guilty to one count of perjury, Mueller would go easy on him. But Dr. Corsi boldly said, ‘They can put me in prison for the rest of my life. I am not going to sign a lie.’

Now Dr. Corsi’s family is allegedly being harassed by the Mueller probe.

Dr. Corsi’s name has come up in connection with documents released by WikiLeaks in the 2016 election. He is being accused of helping move documents from Roger Stone to WikiLeaks.

I told you this was complex.

Roger Stone – someone I have never trusted.  Why? He is the one who allegedly talked Trump into hiring Paul Manafort.  Manafort was a Stone associate. Just saying… 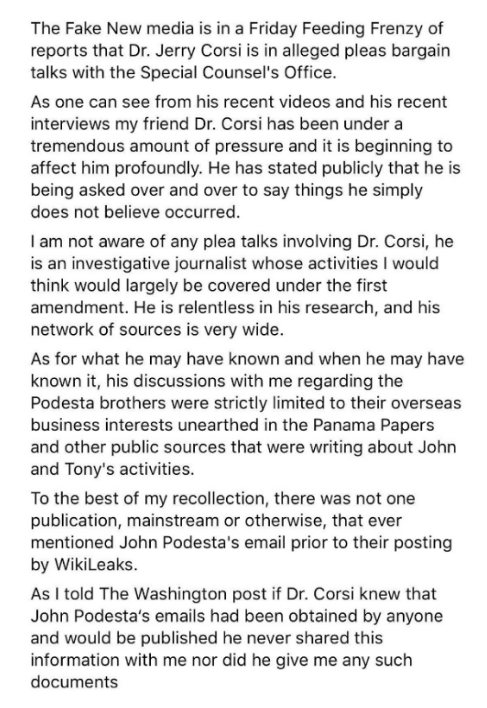 Roger Stone went on to say the following according to www.westernjournal.com/report-jerome-corsi-shuts-mueller-plea-deal/

“I continue to see that my friend Dr. Jerry Corsi is being harassed by the Special Counsel, not for lying, but for refusing to lie,” Stone said. “It is inconceivable that in America someone would be prosecuted for refusing to swear to a false narrative pushed on him by the Muller investigators.”

Stone said he had never communicated with Corsi until after WikiLeaks first released hacked emails from the account of Hillary Clinton campaign chief John Podesta.

“Prior to that, our discussions had been limited to the research he had been doing on the money and business ties that the Podesta brothers had with Russian interests,” Stone said.

The following are the latest facts in this case –

Those are the particulars…or some of them…in the Corsi/Mueller lawsuit.  The fact that the outstanding human being, Larry Klayman, is Corsi’s lawyer speaks volumes to me. It is basically all I need to know at this point.  I wish Klayman luck…he is going to need it. He has been fighting for justice against the government for a very long time, and at this point in history – I doubt he will get it. God bless him.