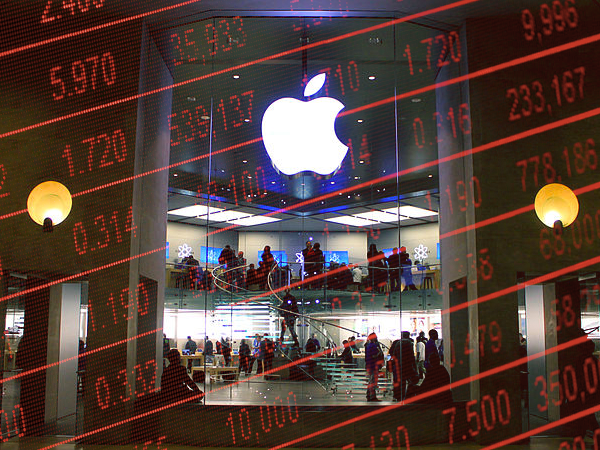 In September 2018, we showed how FAANG companies were “bracing for impact” because of trade war tensions between the U.S. and China.

Now it appears we have our first trade war “casualty” in the form of a major hit to projected Q1 sales for Apple. CNBC has the scoop:

Apple lowered revenue guidance to $84 billion, down from the $89 billion to $93 billion it had previously projected. The company lowered gross margin to about 38 percent from between 38 percent and 38.5 percent.

Apple CEO Tim Cook blamed the shortfall on iPhone sales and upgrades, with most of the impact coming from “greater China.” He shifted the blame to trade war tensions:

It’s clear that the economy began to slow there for the second half and what I believe to be the case is the trade tensions between the United States and China put additional pressure on their economy.

Apple stock has been seeing a massive downward trend from a high of over $225 per share and has struggled to recover since October 2014 (see chart below): 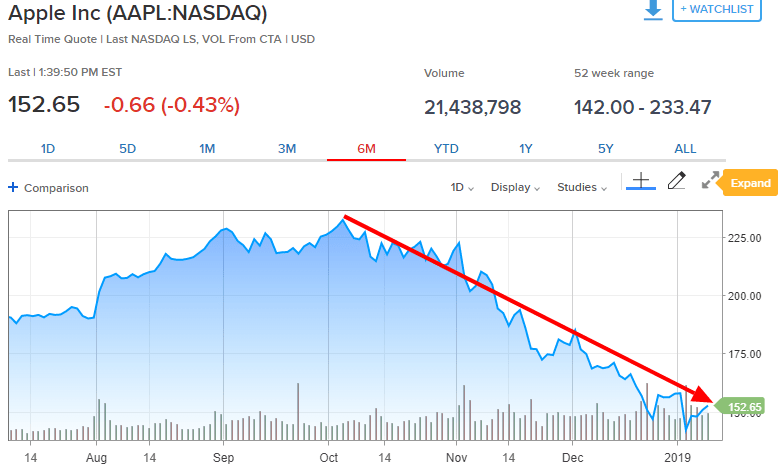 Tim Cook tried to put a positive spin on the ordeal, writing “we are not taking our foot off of the gas” in a letter to investors. Maybe they should slow down long enough to mitigate the lackluster performance in China?

Whatever Apple does, the uncertainty in their future remains in spite of Cook’s optimism. It may be a good idea for other businesses to heed Apple’s warning.

Apple’s Revenue Decline is the “Canary in the Coal Mine”

In a CNBC article, he continued, saying there is more to come:

Apple is probably the canary in the coal mine… There’s likely to be more to come.

Then he explained why thinking about what affects China has little bearing on in the U.S. economy would be “ludicrous”:

To think that what affects the Chinese has no bearing whatsoever on an otherwise resilient U.S. economy, I think, is ludicrous… This is a two-way relationship. The U.S. depends heavily on China. It’s our third largest and most rapidly growing export market over the last 10 years.

He also mentioned that he doesn’t see any “material evidence” that the trade war between the U.S. and China would be ending yet, mainly because of uncertainty.

Over at Forbes, Kenneth Rapoza thinks the market fears a “semi-hard landing” after this round of trade talks concludes.

The Fed already raised rates in December. But now, the tension between China trade talks, their credit bubble, and future Fed rate hikes present another challenge, one that ties together with Apple’s “profit shock” according toMicrolens’ Brian McCarthy:

The Chinese credit bubble is like an electric fence keeping the Fed from getting too tight… The Apple profit shock last week perhaps provided a little jolt.

The Fed’s monetary policy can’t tighten too much, or the risk of a full-blown recession may increase. Apple’s “profit shock” could be sign of things to come.

Apple may be feeling the effects from China’s trade negotiations, but that doesn’t mean your retirement has to suffer along with them.

To help prevent your portfolio from becoming “trade war collateral,” consider diversifying your assets to minimize exposure. Assets like physical gold and silver are historically known to perform well during turmoil similar to what could develop.

Considering assets such as these can help protect you from the effects of a trade war, while simultaneously relieving some retirement tensions.