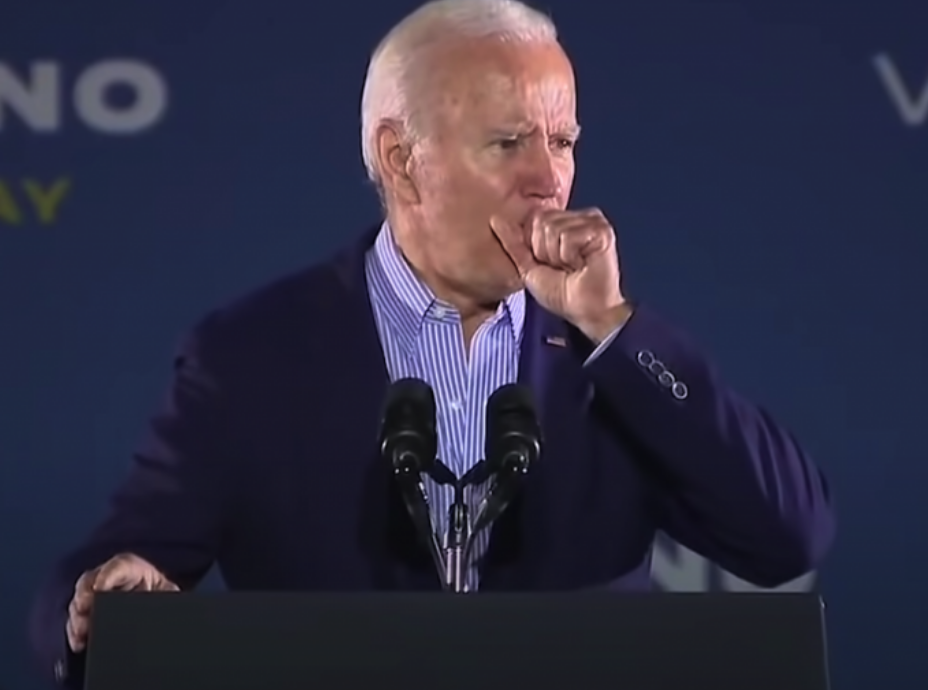 In recent days, Joe Biden has developed a very persistent cough.  It has gotten so bad that he coughed all the way through a couple of major speeches this week, and some news outlets were using the word “feverish” to describe his appearance.  In normal times, extreme coughing fits by someone in his position would often get overlooked, but these are not normal times.  We are in the middle of the COVID pandemic, and we all know that COVID specifically targets the respiratory system.  Could it be possible that Biden has caught COVID or some other virus?  At this point, we have no way of knowing.

Any health issue is a potential concern, because Joe Biden is 78 years old.  Everyone can see that he has been in a state of physical and mental decline for quite a while now, and that means that Biden’s health is highly vulnerable.  A minor illness could become a major illness very quickly, and we all know that Biden has a long history of serious health issues.

So let us pray that Biden will recover from whatever he is dealing with right now.  Because if Biden could not continue in his current position, Kamala Harris would take his place.

The 78-year-old fought off a cough and hoarse voice as he spoke from the campus of Long Beach City College on Monday, even apologizing at one stage and pausing to take a sip of water.

We had seen Biden cough during speeches before, but this appeared to be a lot more serious.

Then on Thursday, Biden coughed his way through a speech about taxes and the economy…

President Joe Biden on Thursday attacked big corporations and the ‘super wealthy’ for not paying their taxes as he coughed his way through a speech to push Congress to pass his economic agenda.

‘Pay your fair share,’ the president said during remarks in the East Room of the White House. It was the second speech this week where Biden was interrupted by repeated coughing fits.

If an illness lasts for more than just a couple of days, I would definitely say that is a cause for concern.

We’ve seen [Biden] on many occasions where he has a repeated cough? What is the situation with that cough and is that a concern?…Is there an explanation for why he coughs so frequently in situations like that? I’m sure you saw it.

In response, Psaki assured her that everything was just fine…

“I don’t think it’s an issue of concern,” Psaki said. “There’s a range of reasons why we need to clear our throat or have a light cold.”

Of course Psaki was going to say something like that.

What else could she say?

Even if Biden was extremely ill, his handlers would probably try to cover it up for as long as they possibly could.

Psaki is always going to stay on message, and right now the message is that there is absolutely nothing wrong with Biden’s health.

.@PressSec is asked about Biden's repeated cough during press conferences:

"I don't think it's an issue of concern. There's a range of reasons why we need to clear our throat or have a light cold." pic.twitter.com/xTtgNiVm2s

But many on social media believe otherwise.

In fact, the hashtag #Bidencough has started to trend on Twitter…

Many on social media have noticed Biden’s recent coughing, inspiring the hashtag #Bidencough on Twitter.

“Biden coughing, gagging and phlegm gurgling is making me ill. Every television speech full of this. Give the man water PLEASE,” one user wrote on Twitter after the president’s East Room speech.

Let us hope that Biden recovers from whatever is wrong, because it is very important for him to remain healthy.

I know that may seem like an odd statement to many of you, and so let me explain.

Even though Biden has arguably been one of the worst presidents in U.S. history, the alternative would be far worse.

If Biden cannot continue to be president for health reasons, he would be replaced by Kamala Harris.

Many regard Biden as liberal, but Harris is much more liberal.  In fact, she was rated as the most liberal member of the U.S. Senate during her time there.  That means that she was even to the left of Bernie Sanders.

In addition, it is well known that Harris has an enormous temper.  According to Politico, her office is being described as “an abusive environment”, and she churns through staff members at a very alarming rate.

On top of everything else, she has shown authoritarian tendencies going all the way back to her days as attorney general of California.  I think that one of the reasons why the Biden administration has taken such an authoritarian turn is due to her influence, and of course things would be much worse if she was actually in charge.

So as bad as Joe Biden has been, a transition to a Harris administration would be like going from the frying pan into the fire.

If Harris becomes president, and I believe that there is a very good chance that she will, it will set the stage for so much of what I am warning about in my new book.

So I am definitely hoping that Joe Biden’s health holds up for as long as possible.

Biden’s presidency has been a complete and utter nightmare, but if you think that this is as bad as it can get you are very, very wrong.