Are 55 and older workers propping up the U.S. economy? The data is rather persuasive that the answer is yes.

The chart of U.S. employment ages 25 to 54 years of age and 55 and older reveals a startling change.

There are now 20 million more 55+ employed than there were in 2000, an equivalent of the entire workforce of Spain. This unprecedented demographic / employment transition is worth a closer look.

As the second chart shows, some of this increase is due to the rising population of Americans over 55 years of age–an increase of 42 million. In 2000, 30% of those 55 and older were employed. Today, over 37% are employed–a significant increase in the percentage of 55+ people who are working.

An increase of 20 million employees age 55 and older is so large that it’s difficult to grasp. An increase equivalent to an entire nation’s workforce is one way to make sense of it. Another is to look at the increase of America’s total population from 2000 to 2022, which is about 48 million people (282 million in 2000, 330 million today).

If the percentage of employed 55+ had stayed the same, there would only be 17 million 55+ workers today. Instead, there are over 37 million. This raises a question: why are so many older workers continuing to work longer than they did in 1990 and 2000?

I doubt there is one cause or answer. We can attribute this dramatic shift to a number of causes: older households that never recovered from the financial damage wrought by the 2008-09 Global Financial Meltdown; older workers (like me) who only have Social Security for retirement income who can’t get by on just their SSA check; those who enjoy their work and see no reason to stop; people who retired and became bored out of their minds so they returned to the workforce; parents who keep working to help their offspring and/or elderly parents; people who keep working to maintain healthcare coverage until they qualify for Medicare; older entrepreneurs who can dial back their workload but who still love their work, and so on.

See also  CS, GS and BofA, all of whom believe stocks aren’t fully reflecting the challenges facing the US economy

All of these reflect structural changes in the U.S. economy: a steady decline in the purchasing power of wages and financial security, systemic exposure to the risks of financial bubbles bursting, etc. The bottom line is that nest-eggs that were deemed adequate are no longer adequate, and the only way to fill the gap is to keep earning money.

These changes are reflected in the decline in the percentage of employed 55+ people from 28% in 1970 to 18% in 1990 and 2000, and the subsequent rise to 37%. In an economy with an expanding workforce of young employees and rising productivity, more older workers could retire early. This is no longer the case.

In many cases, there is no nest-egg due to bankruptcy via huge medical bills, the heavy burdens of student loans, or the costs of helping children and grandchildren or very elderly parents. (Many of us aged 65-70 are taking care of parents 90+ years of age and helping out with active 3-year olds. Retirement? You’re joking.)

As a result, expenses have risen rather than dropped for the 55+ cohort, requiring an income to stabilize household finances. (Have you looked at childcare (grandchildren) and elderly care (parents) costs recently?)

Another important structural change is the demand for workers of any age who are reliable and able to do the work. People who are accustomed to the structures of work by virtue of 40 or 50 years of employment are generally reliable workers and thus valued by employers beset by a scarcity of reliable, productive employees. (My first formal paycheck was issued by Dole Pineapple in 1970. That’s 52 years of getting accustomed to the demands of employment. I’m pretty well broken in now.)

There are also demographic and cultural dynamics in play: the continuing satisfactions of work and the loss of purpose many feel in retirement, the decline in age discrimination, longer lifespans, etc.

Whatever the causes, 37 million workers 55 and older are earning money that’s flowing into the economy and providing stable productivity–20 million more 55+ workers than 20 years ago. These 20 million jobs generate income that isn’t just funding cruises and RVs. In many cases, it’s supporting several generations on either side of the 55+ cohort.

Are 55 and older workers propping up the U.S. economy? The data is rather persuasive that the answer is yes. 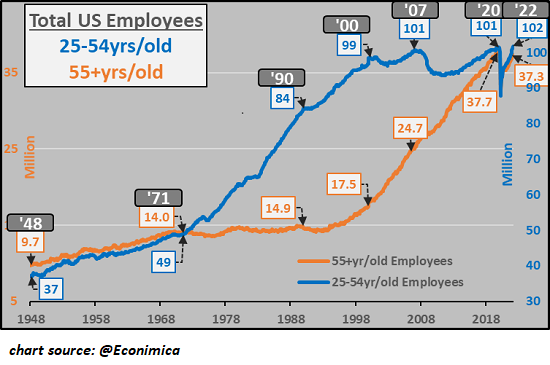 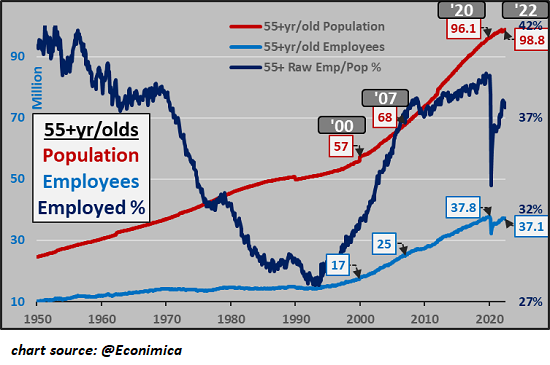 My new book is now available at a 10% discount this month: When You Can’t Go On: Burnout, Reckoning and Renewal.