Tax season is in full swing, and it’s fair to wonder what you’re getting for all your money. It turns out for people living in most states, the federal government is spending a lot more than it’s receiving in tax revenue. 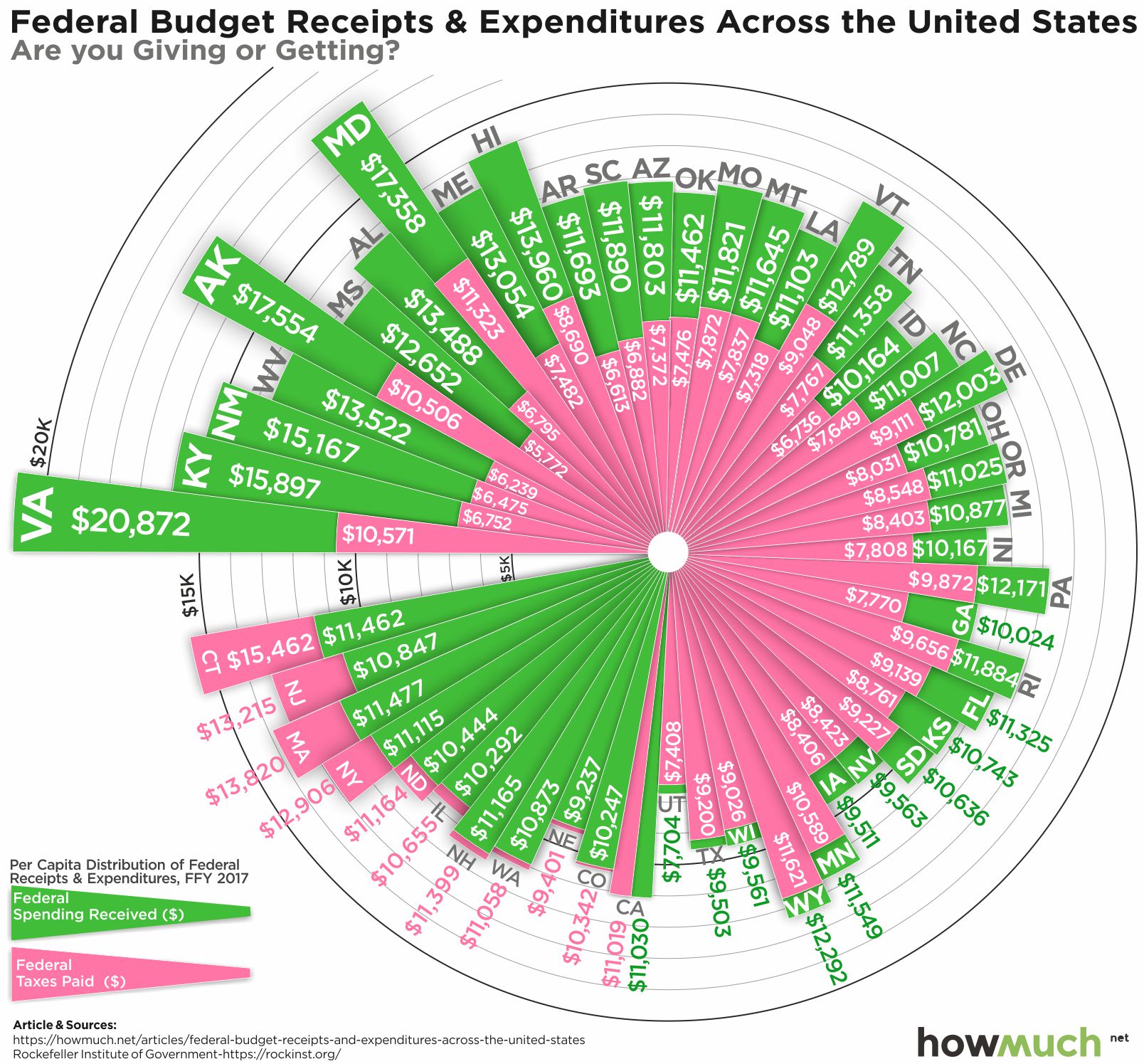 Our data come from the SUNY Rockefeller Institute of Government’s 2019 report on fiscal policy. The report breaks down how much money each state pays to the federal government through taxes on a per capita basis (pink), plus how much the feds sent back in the form of expenditures (green). Expenditures is a broad category and covers a variety of things, including direct payments to people like Social Security, contracts for local governments, wages for federal workers and sub-contracting work. We ranked the states moving clockwise from high to low on the net difference between the two figures, showing a unique take on the balance of payments between federal and state governments.

The first and most obvious insight in our visualization is to understand which people are receiving more money in federal outlays than they’re paying in taxes. Virginia, Kentucky and New Mexico top the charts as the top three getting the most money back. For example, in Virginia, people on average contribute $10,571 in federal tax revenue but benefit from $20,872 in federal outlays. Granted, many of these expenditures are payments to the federal workers who actually live in the state, but it’s still a nice return for the state.

At the opposite end of the spectrum, several states are actually in the red. Connecticut, New Jersey and Massachusetts each contribute thousands more on a per capita basis than they receive back from the feds. California is the closest to breaking even at a net difference of $12 per person, which is slightly more than the state’s minimum wage of $11/hour. Bear in mind our visual doesn’t take into account the overall size of the allocations. California looks small only because it’s a per capita figure. In reality, we’re talking about billions of dollars in money flowing back and forth.

In the final analysis, 40 out of 50 states are getting more, sometimes a lot more, from the federal government than they’re paying in taxes. There’s a net negative balance of payments across the country. That’s why the federal government is running a massive deficit of around $1 trillion this year. Unless and until politicians are willing to let their states contribute more than they receive, this situation will likely only continue to get worse.