by Umar Farooq
Personal contract plans has made the borrowing to buy a vehicle easy, fast and free from penalties. Is that really true under the current circumstances? A huge increase in the amounts borrowed by already indebted households in Britain and the US to buy new vehicles is fuelling fears that “sub-prime cars” could ignite the next financial crash. Financial experts warn that cheap auto car loans are the upcoming threat to the US economy. The Federal Reserve Bank of New York says that as many as six million Americans are at least 90 days behind on their car loans.
It takes just minutes to fill in the forms and get the loan. Applying for the loan and taking the loan takes no time but the repayment looms to last a lot longer.
“Experts have expressed concerns that the borrowing practices which are fuelling the boom in global car finance have worrying similarities to the sub-prime mortgage crisis a decade ago. In March, Santander Consumer USA – the largest lender in the sub-prime car finance space – was fined more than £20 million by US authorities for lending money to borrowers who they knew could not make the repayments. More recently, ratings agency Moody’s noted that Santander Consumer had verified the income of just 8% of applicants for car loans.”  Home.bt 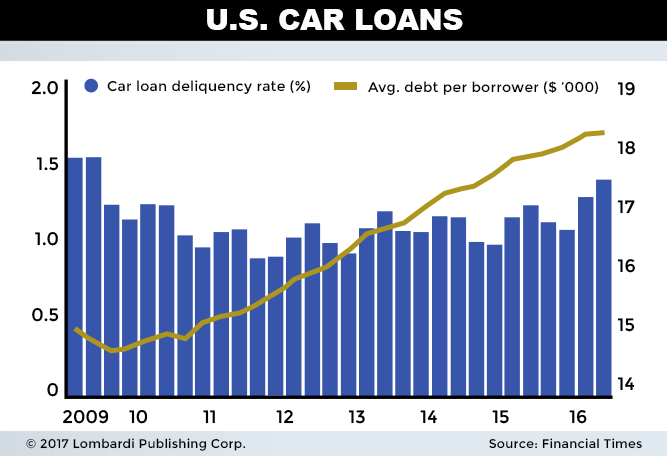 Source: lombardiletter
“The car financing industry is confident that these new breeds of ultra-low-cost loans, which account for 82% of all new car registrations and are known as personal contract plans (PCPs), are a safe and secure way of financing new cars. It says sub-prime lenders, who offer loans to people with erratic incomes and damaged credit ratings, account for only 3% of the market and the industry can cope with any destabilizing events coming down the track. Some experts are not so sure. There are worries that the volume of lending will be vulnerable to an increase in interest rates or rise in unemployment.”  Theguardian
Looking at the current situation, it’s difficult to say right now. The cars and houses are very different as assets; banks are simply nowhere near as exposed on car loans as they were on mortgages back in 2007 when the entire financial system worn-out. And industry facts and figures here are at pains to point out that defaults on car loans in the UK are very small, certainly compared to the United States. But if it does all come crashing down, it will hurt. In UK, manufacturers and the industrialists will take a big hit, and as the Bank of England pointed out in a recent article, “the car industry’s fortunes play an important part in the stability of the broader economy” as it accounts for over 4% of GDP.
Bottom-line is that with both auto debt and delinquencies running at historically high levels, a reckoning could be around the corner—it won’t take down the entire financial system, but it will be felt in a crucial corner of America’s manufacturing base.

1 thought on “Are We Heading Towards The Next Financial Crash Cheap Auto Loans Indicate? Yes!”